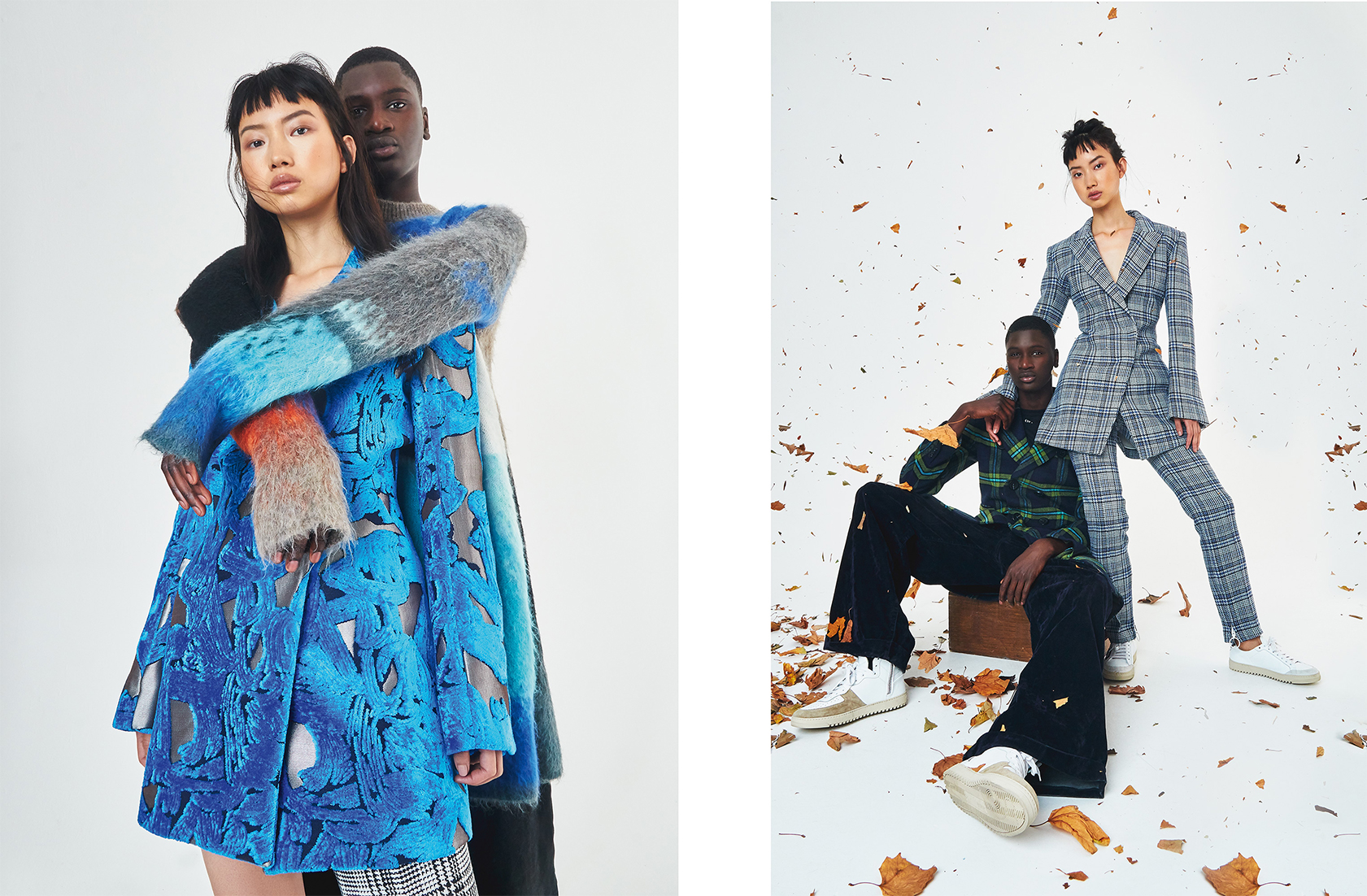 [V]irgil Abloh doesn’t read reviews, wouldn’t live in any other decade than the one we’re in now and is a glass-half-full kind of guy. “I’m essentially an optimist, or a modernist. The world is maybe in the most open-minded state that it’s ever been in. To me, it’s like the renaissance.”

The 37-year-old designer grew up in Illinois, outside Chicago, where he is now, having just arrived from LA. “I grew up in a very typical mid-western American environment, not too suburban, not too urban, playing soccer and being interested in what I was interested in,” he says. “My upbringing, being a teenager in the 90s in America watching rap, hip-hop, graffiti, skateboarding – that’s where my point of view comes from.”

It’s mid-July and he’s tying up a few loose ends ahead of his SS18 womenswear collection, which will be shown in September, and catching up on Instagram as we speak on the phone – such is the multi-digital, multi-connected, multi-functioning, multi-tasking world we find ourselves living in today. Appropriately, the theme of this issue is “mad world” – and we can all relate. 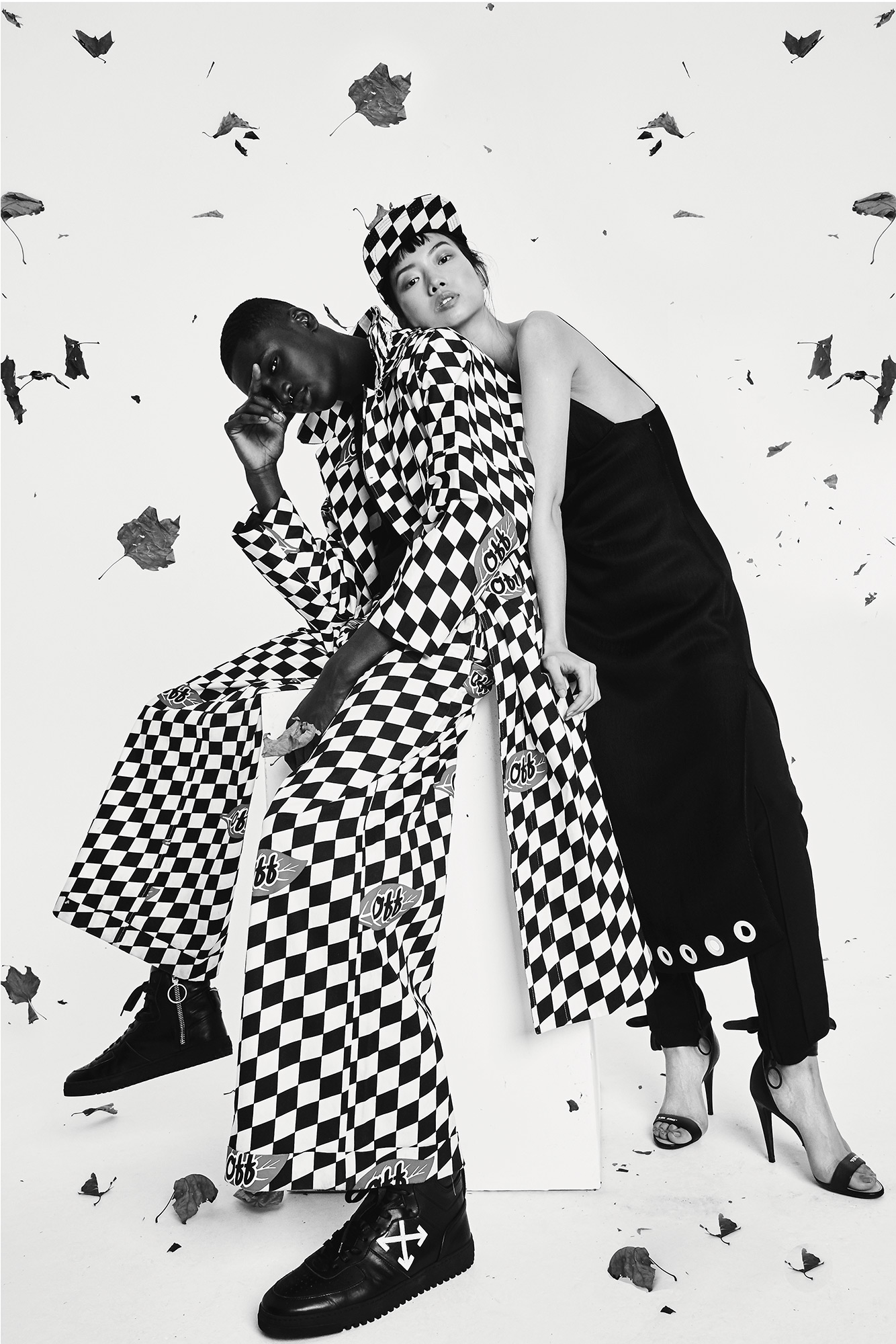 "The world is maybe in the most open-minded state that it’s ever been in. To me, it’s like the renaissance.”

“We have a never-before ability to see the past in a multiple point of view perspective. There’s never been as much access for those less-connected or fortunate, to rediscover and form their own opinions,” he says. “Many of those things combined make for tremendous opportunity. It just depends what you want to do.”

For Virgil, since 2009, that has been fashion. He started out working at Fendi, under Silvia Venturini Fendi, went on to become the creative director for Kanye West’s creative content company Donda, launched his precursor fashion label Pyrex Vision in 2012, and is currently working on Off-White, launched in 2013. Oh, and there is a Grammy award nomination for album packaging alongside Riccardo Tisci and West. “To me, as a young designer it’s inspiring,” he says, of the position and place he finds himself in now, among an in-flux and changing fashion landscape. “It makes me feel like I’m creating work at the right time.”

And having been invited to be a guest designer at menswear showcase Pitti Uomo back in June, and previously making it as one of the top eight finalists for the LVMH Prize in 2015, he does seem to be doing just that. His aesthetic is one that takes subculture and streetwear as its jumping off point – “That’s always been my DNA,” he says – but isn’t bound solely to it. After all, Virgil was rumoured to be the top dog for the job at Givenchy back in February this year when Riccardo Tisci made his exit.

“To me, it was an interesting sort of culmination of a time and moment,” he says of the suggestion. “I think traditionally creative directors for fashion houses operated in a different way. For an industry to assume without any sort of fact that that might be somewhere I might go was to me… it’s really telling about where the future of fashion is going and what creative direction looks like.” 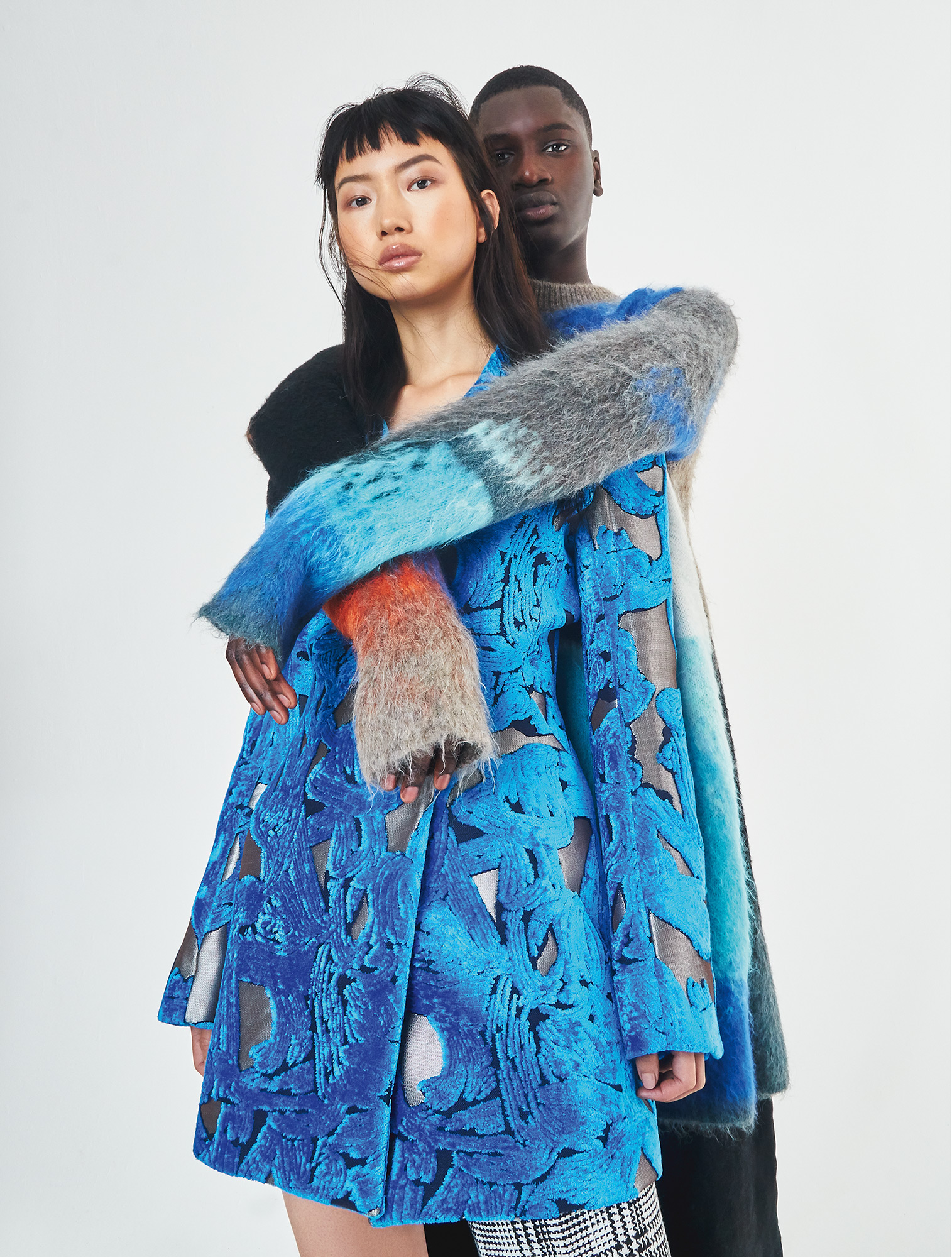 "My idea was always to bring what was happening in subcultures, what was brewing in LA, New York, this American contribution, to fashion."

The gig eventually went to Clare Waight Keller, formerly of Chloé , but it made for an interesting proposition, bearing in mind that Virgil was essentially still a very new name on a very competitive block. “My idea was always to bring what was happening in subcultures, what was brewing in LA, New York, this American contribution, to fashion. I wanted to bring that to high fashion, which is Paris. Streetwear at that time was, and still kind of is, undefined. I saw it as an opportunity to define it,” he says of Off-White’s inception.

“Off-White embraces contradictions. The name is self-implied, stuck between two things and I make an effort to never be too distinct, or never shy away from contradictions. It could be luxury, it could be street, it could be high street, it could be high fashion, or high art or something normal people can relate to, but that middle ground makes it real,” he elaborates. “I think in fashion that’s what streetwear or normcore is; we’ve seen the end of the glamourfied thing. We want something real. My idea is not to be real or sort of imaginary; it’s to find my own middle ground and that middle ground is my thumb print – what makes my work.”

Virgil cites Kris Van Assche, his first menswear show especially, and Phoebe Philo at Céline, as his fashion heroes, both having contributed to him seeing fashion in a different light. “I’m forever impacted by [Philo’s] work. She’s made a modern interpretation of what luxury can mean so she extended the definition of luxury in terms of fashion.” To that he adds his high school years – he was always into niche culture, as he puts it. “Music obviously.” A mix of rock ‘n’ roll and hip-hop, as well as skateboarding. “So those different themes were my early impressions, like streetwear. That formulated a lot of my opinion on how clothing could be worn and how clothing is tied to a niche culture.”

A Bachelor’s degree in civil engineering at the University of Wisconsin came next, followed by a Master’s degree in architecture at the Illinois Institute of Technology. Then along came the fashion, really.

And his is a name and a brand that can be bunched into something of a fashion moment and movement back in 2015 when a group of young designers and labels injected new blood into Paris. Around two years ago and the City of Light was the time of Vetements, and consequently the new Balenciaga, of Y/Project, of new names at older houses – a shift in who was shaping the fashion landscape now. 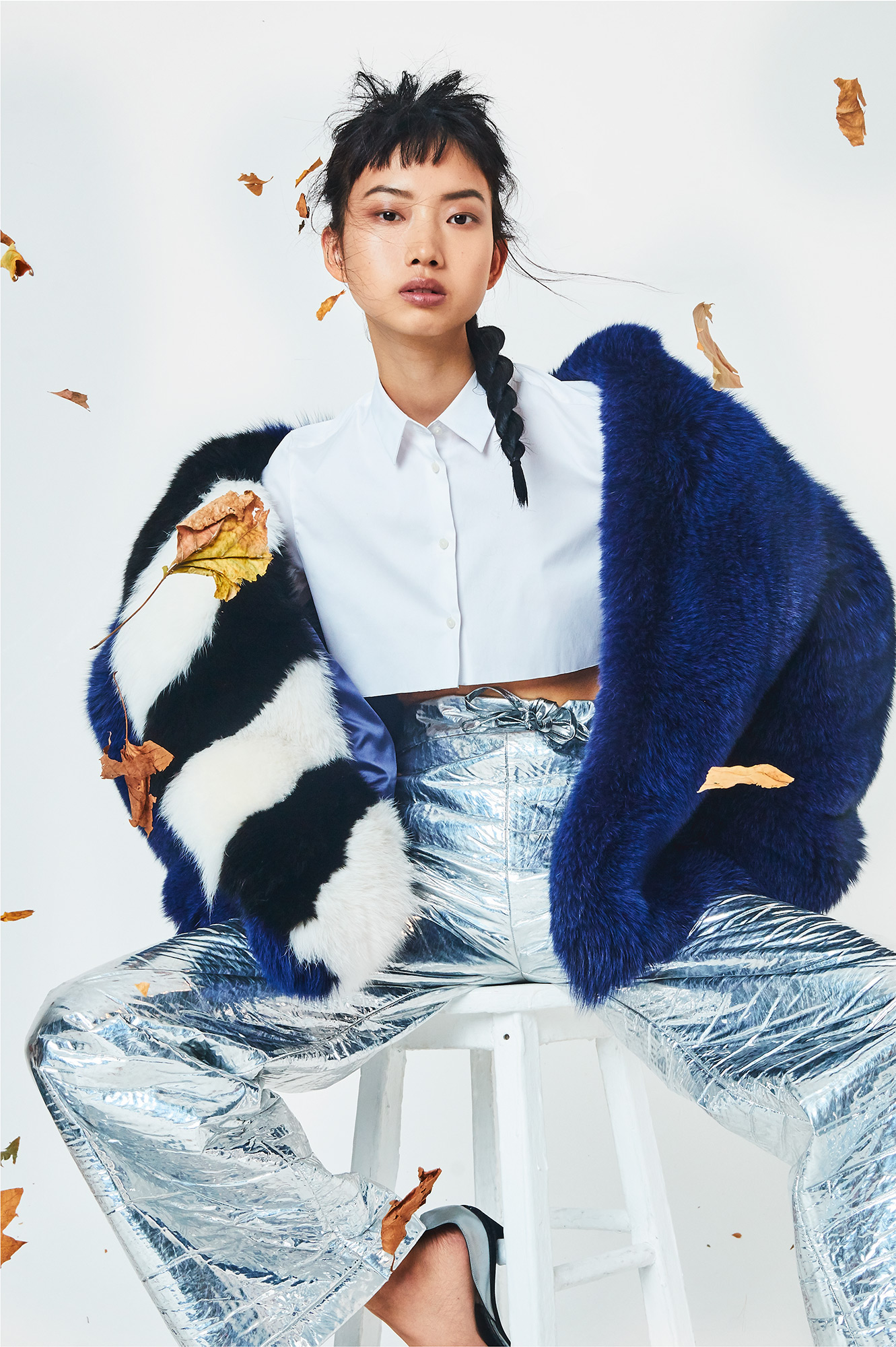 “I spend a tremendous amount of time making it so that Off-White can’t be put in a box."

“It’s extremely intimidating,” he says of Paris, which holds the overall fashion capital title, and which he calls home every spring/summer and autumn/winter season, showing his collections among his contemporaries as well as the big conglomerates. But for him, that’s an advantage – he is a glass-half-full kind of guy, remember? “You don’t know what you don’t know and I embrace that. I have to make my own rules and I do so widely and I pick and choose how I want to represent my ideas. That’s the creative freedom I enjoy.”

He describes Off-White as being “a project that I thought of and am able to execute an idea that I have in a self-contained system”. How exactly does that manifest in real life? For AW17, it involved his streetwear DNA combined with a layer of femininity and polish. Had it in fact been an audition for the Givenchy job, it wouldn’t have been too far out of place. Meanwhile for SS18, the designer previewed inspiration images of Princess Diana and her many “looks” on his Instagram feed as an influence.

It’s a brand that could lazily be typecast for hoodies and T-shirts, but Virgil will definitely argue back on that one. “I spend a tremendous amount of time making it so that Off-White can’t be put in a box. Obviously, I have a system for making something that’s Off-White but I fight against being categorised,” he says. “I could send a hanger down the runway and that could be Off-White.” It just comes down to the rationale. And for him, that’s about creating a space for ideas and testing these out: what does luxury mean and where can it go? What does streetwear mean and where can that go? “I’m very early in my career, I use Off-White as my resume.”

And one imagines that on his real-life paper resume, he would – or should – list “master collaborator” among his specialist skills: he’s already teamed up with IKEA to create a version of its Frakta tote; the SS18 menswear collection at Pitti saw a tie-up with artist Jenny Holzer; and then of course there’s the much reported on and eagerly awaited Nike pairing, which has been getting fans of both the brands, the sneaker world and the internet, all in a tither this year. “My career started in collaborations. I love the idea of two different brands coming together and two different ways of thinking. It’s very much what Off-White is about,” he says. 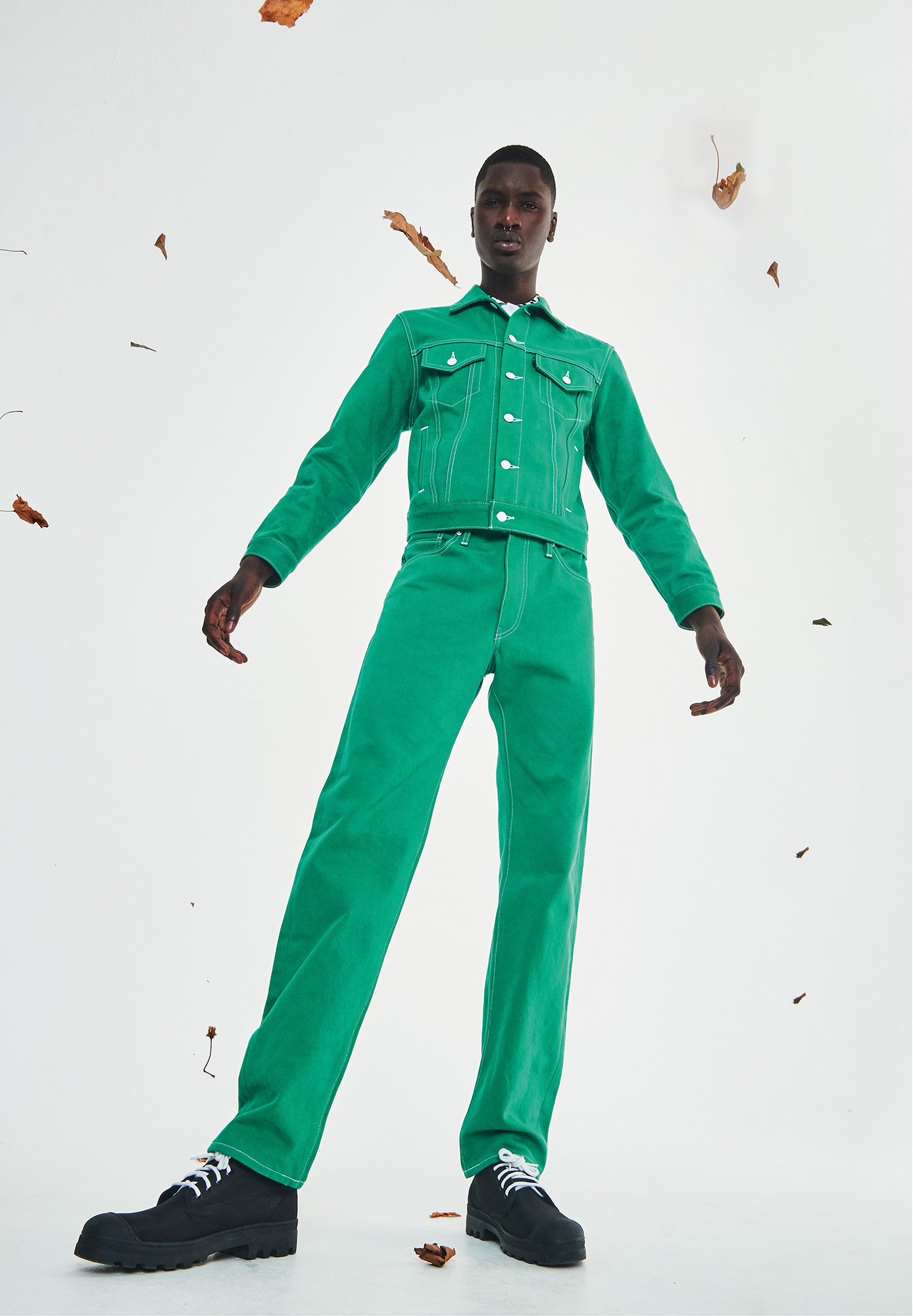 “The only measure of success is that I can do things in succession, or the next projects are bigger or more direct to my goal than the last."

Rewind a little further and that seed was sown while doing his Master’s in architecture. “You know that’s what architecture is by the way?” he points out. A collaboration. “An architect doesn’t just build buildings for himself, there’s a client in mind.” To this end, his studies taught him to be analytical with his own design gestures. “Architecture is multidisciplinary, it’s about synthesising a lot of different things and I definitely apply that in fashion.”

Which is perhaps why he’s not all that bothered about reviews. “I can tell if the collection is good or not or if it’s saying what I want to say,” he says. And hence the non-reading of them. He might have started a couple, but it was never really all that important to get to the end; he’s the ultimate judge. “I’m sort of in a weird creative stage where I’m still trying to prove to myself that I can execute an idea and feedback doesn’t give me fulfilment in a weird way.” And in those few moments before the show you won’t find him flapping about backstage watching the monitor, he’ll be out front, “like a fan” he says. “I didn’t do all that work just to stay behind, I want to see what the people are seeing.”

What they will be seeing for sure is a sense of ambition, though Virgil is pragmatic when it comes to goals. “The only measure of success is that I can do things in succession, or the next projects are bigger or more direct to my goal than the last. That’s the thing about these milestones, once you get them, increasingly they aren’t as impressive.” However, being a young brand in Paris is. “That feels rewarding,” he concedes.

But just like the rest of us, Virgil starts his day catching up on the texts, emails and Instagram that he’s missed while he’s been sleeping. Because it is a mad digital world. His stance on social media? “It’s extremely important, you can’t talk about modern culture without it,” he notes (at the time of writing he has 819k followers and the brand has 1.4m). It’s true, but is it overwhelming? “We share more images now than have ever been in existence, we’re seeing more art, are inundated with information and I think that is positive, sharing more and more creativity and ideas that were traditionally limited by their format.” Which is why he advocates the here and now as being the best. “There’s too much opportunity.”