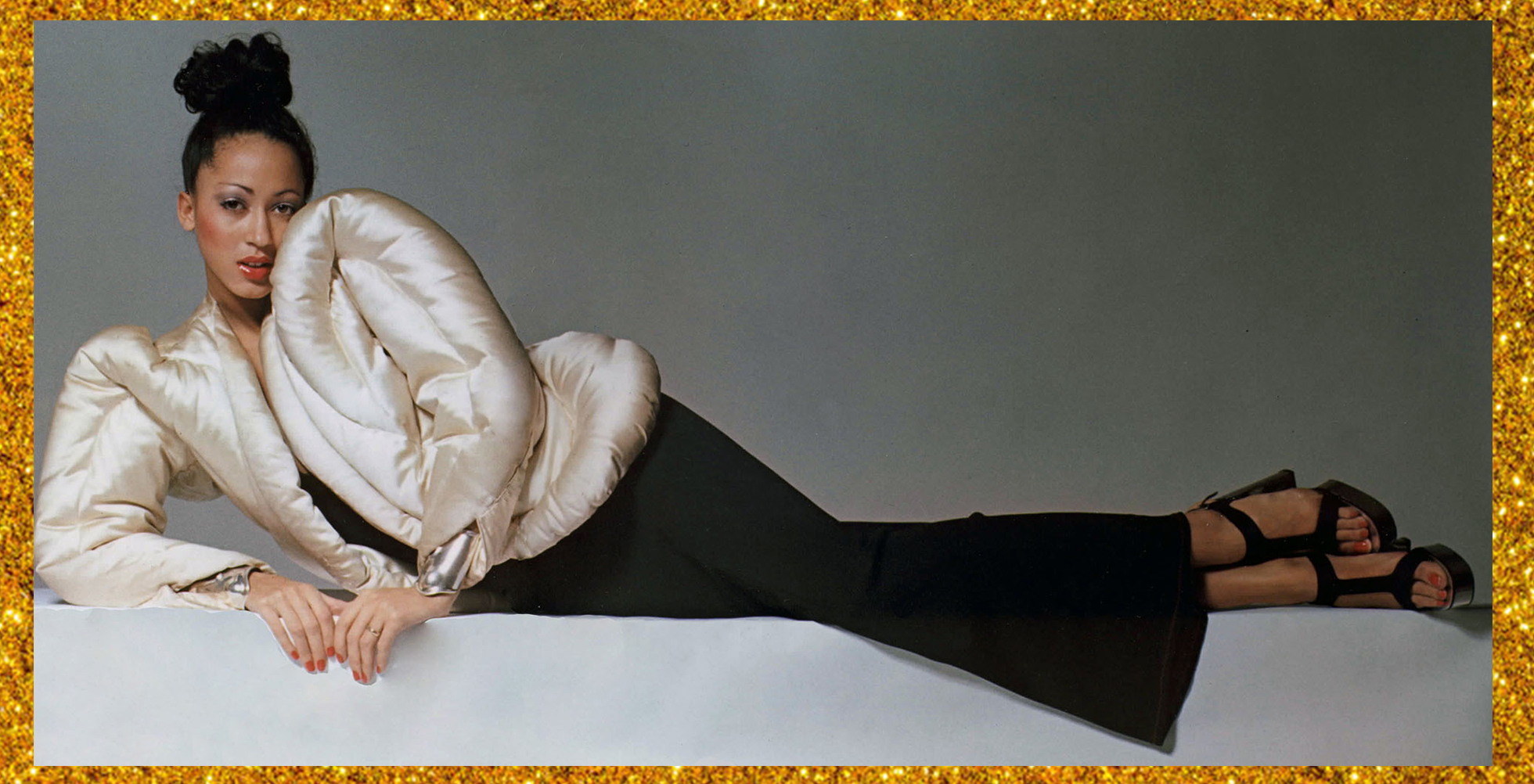 [“][O]H MY GAWD, get outta town!” Pat Cleveland guffaws down the phone from her home studio in rural New Jersey. I’ve let her in on a secret. But I’m far more interested in hearing hers. The legendary ‘70s muse, one of the first African-American stars of the modelling world to reach super status, has a glamorous backlog of stories to share. For forty three minutes I’m invited into her illustrious world of fashion, poetry, peacocks (she has 22, watching her keenly in the backyard throughout our interview) and everything in-between. There’s the Studio 54 days with Stevie Wonder and “the gang”, revisiting fashion’s heady past dancing down the runway for everyone from Yves Saint Laurent to Thierry Mugler and being told at sixteen she’d never make it because of her race to shooting with the world’s most famous photographers. At 67, Cleveland is as ambitious and curious to chase the next challenge as she ever was, revealing her colourful collages for the first time in a new group exhibition 75 Works on Paper at BEERS London gallery.

“I don’t smoke cigarettes, so if somebody makes me infuriated I totally turn away and start sketching,” she laughs. “I’m like ‘talk to you later!” You can hear the colour talking to you – you’re just writing your soul across the canvas.” Does it feel more personal exhibiting your artwork than say, modelling, an interpretation of someone else’s vision, I ask. “No no no! There’s no difference, with both it’s just tattooing a spirit onto yourself.” Her mother, Lady Bird, was a celebrated painter herself, but Cleveland had other plans and pursued fashion design in her youth. “I was sewing and pinning and trying to get out of the house trying to make clothes to escape in,” according to Pat. “I call that the great escape: fashion.”

Cleveland’s flamboyant tastes caught the attention of Carrie Donovan, an assistant fashion editor at Vogue, on a New York subway as a teenager (“I was wearing one of my crazy houndstooth hats and mini-skirt that nobody had at the time,” she recalls.) Though her journey from Harlem to modelling for every major fashion house in her heyday was met with racism at every turn, once being told early on in her career ‘you just don’t look like an American.’ Her response? “I thought to myself if I have American, Cherokee and Irish heritage in me I’m definitely American!” she says. “My father’s from Sweden, my mother’s half-black, Irish and everything else and so I thought you know, whatever, who cares – I’ll go to Paris! Everybody is beautiful in their own way, everybody deserves to come up front and take [centre] stage.” Her fate was decided – she would find her own place on the runway. 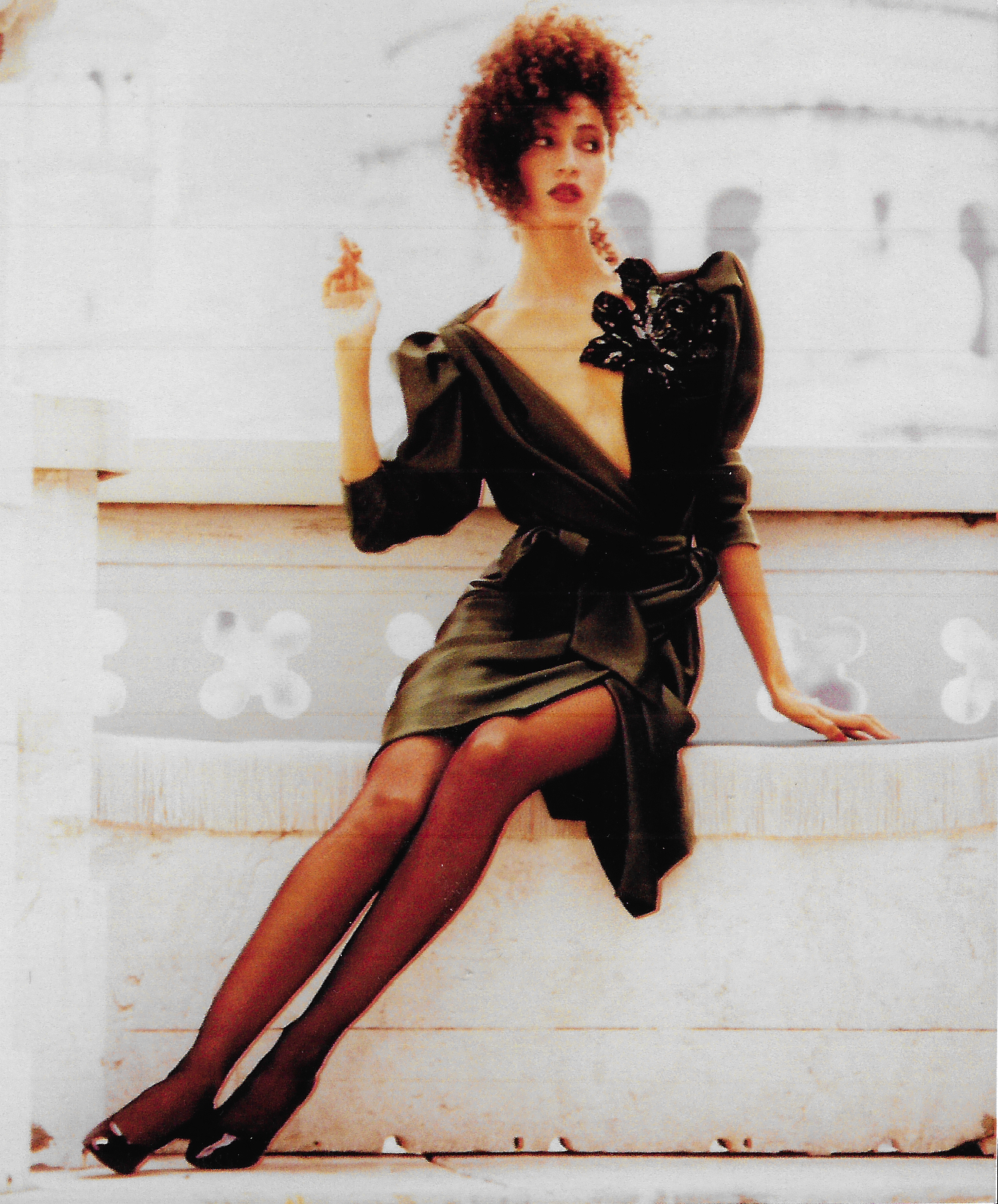 “The most amazing show I ever did was the Thierry Mugler show [in 1984],” she says. “I was actually six months pregnant and had to come out of the ceiling as Madonna. Everyone was freaking out like angels on the stage! I never felt so much love from my audience. My comrades.” Of course, there was a brief moment of doubt before she agreed to the stunt. “Thierry is such a showman – I said ‘are you kidding me, you do it! He’d do it. You know that song, ‘anything you can do, I can do better,” she sings softly. The same could be said for her distinctive twirl on the catwalk. “I grew up in New York and you’re walking on runways everyday down the street and you see yourself in the glass reflection,” she explains. “But instead you have a clear path to walk, where you don’t have to bump into anybody. [Where you can] forget about the world and make your own carousel.”

"At Studio 54 it was about blending people together in the spirit of fun - they’d raise the curtain and combine everyone on one level at a certain hour - the wannabes and the elite of society."

Pat’s thoughts on today’s fashion climate? Is it less fun? “Fashion shows used to be real entertainment,” she tells me. “They could be two hours long, girls would come out and do little numbers, you’d give everyone champagne and hang out. Now everyone knows about it.” This was also pre-social media. “My daughter [fashion model and Hunger magazine cover star, Anna] just deleted her Instagram because she doesn’t want to be a slave to the ego,” she says. “Everybody’s looking for numbers. It’s just gone too far.”

Studio 54. Decades later and there is still a mystery surrounding the worlds most famous nightclub. Sex, drugs, rock ’n’ roll – as a regular herself, was it really has debaucherous and wild as it’s often described? “I think there’s a light and a dark side,” she explains. “People are contrasting what they think as morally correct or incorrect. At [Studio] 54 it was about blending people together in the spirit of fun – they’d raise the curtain and combine everyone on one level at a certain hour – the wannabes and the elite of society. The drugs or whatever is such an individual experience. Young people are sexy and they’re going to hop on each other and boogie woogie [laughs].”

"I grew up in New York and you’re walking on runways everyday down the street."

Her most cherished memory from that period of her life? “When I sang Happy Birthday to Steve Rubell [Studio 54 co-owner] with Stevie Wonder,” she says. “Sting and the gang were all there and it was like ‘Oh My Gawd Music!” Michael Jackson, Elizabeth Taylor – we’re all just hugging, dancing, swirling and having fun.”

Disco-chic and 70s fashion is still very much in the limelight. The secret to the era’s enduring appeal is it’s free-spirited innocence, according to Cleveland. “Teenagers took over!” she says. “From the late 60s until the late 80s it was very young, free, outrageous high heels and just kicking it around. People were just trying to capture the light.” Pat describes her wardrobe now as akin to “when you shake a bottle of coke and it spills over” and wears the same clothes she’s had since the 70s. “Miss Vreeland always said when you finish wearing a garment wear it out for a few days and let it relax. I love them like they’re people – Yves Saint Laurent, Halston, Sandra Rhodes…most of my clothes have been gifted to me [so] it’s hard to give them up.” 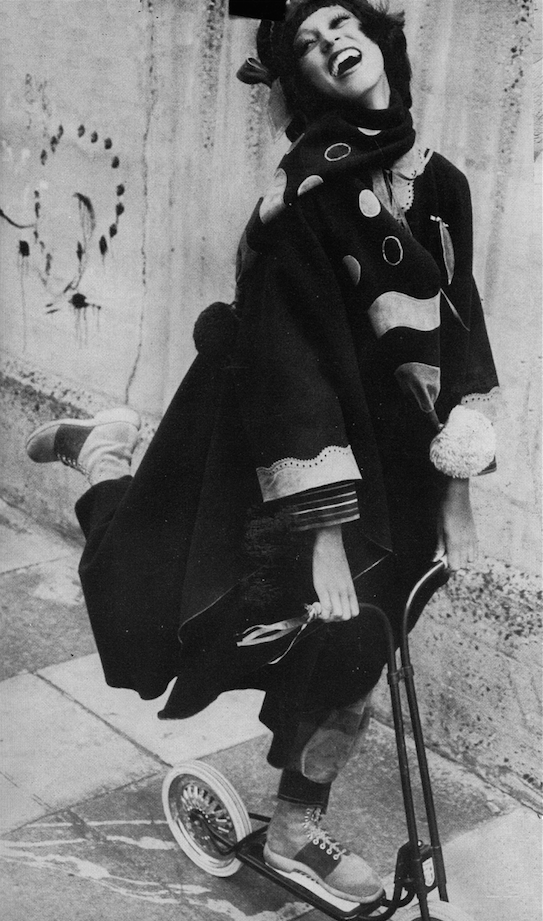 "From the late 60s until the late 80s it was very young, free, outrageous high heels and just kicking it around. People were just trying to capture the light."

Pat’s peacocks are craving some attention now, but she is determined to finish a piece of work this morning. “I have two giant canvases that I’m deciding whether to put pink with green or purple with yellow. I don’t care how long it takes. You can’t try to finish something you just have to allow it to come to life.” I tell her I will pass that advice on to my mother, also a fine artist, and we both rejoice in our childhoods roaming round exhibitions with a much older crowd. “Yeah and you didn’t know what they were right?” she giggles. “You just thought they were jolly and it made you want to get in there and be an adult with them. We had the same experience! Aren’t we lucky.”

Pat Cleveland’s work is part of a group show 75 Works on Paper at BEERS London. You can find out more here.
This article originally appeared on Hungertv.com on 21st November 2017.