[P]ost Malone’s first single of 2017 – “Congratulations” – just went platinum. It’s yet another indication that his debut full-length album Stoney has established the artist otherwise known as Austin Post as a key figure in the global rap scene. Between his braids, gold fronts, chains and the fur coat he wears to our shoot, the man behind “White Iverson” is bringing throwback Southern s­wag to a millennial audience, with a whole lot of heart. And he’s racking up the streams, sales and shows to prove it’s working.

Born in Syracuse, New York and later moving to the suburbs of Dallas, Texas – Post Malone grew up listening to his Dad’s record collection spanning from Megadeth to Tupac. An obsession with Guitar Hero led to him learning the instrument for real (he now has an actual Louis Vuitton guitar).

Combining sparse beats and lyricism with country-infused melodies Post is picking up where the likes of Bubba Sparxxx left off. Creating his own unique sound dubbed ‘Trap Folk’, he has won co-signs from Kanye and Justin Bieber – and recently achieved over 1 billion streams of his debut album Stoney. We caught up with the Texan charmer to find that he’s taking it all in his stride. 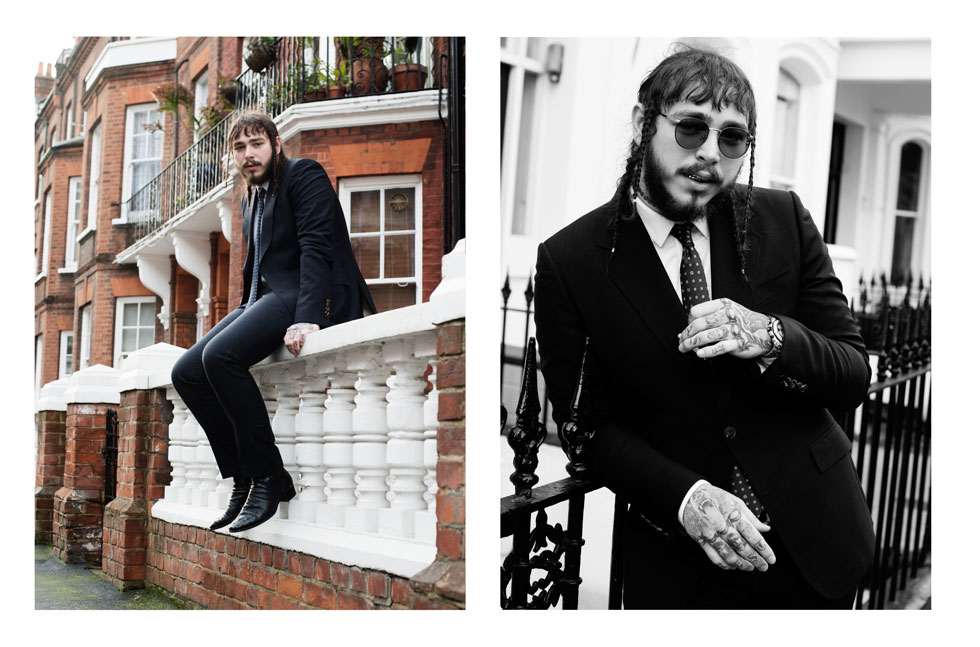 How would you sum up the Post Malone aesthetic?

A little bit of rugged Texas with a lot of sauce and appreciation for all the genres.

Which song you’ve written means the most to you?

“Feeling Whitney” – it’s a huge part of who I am as an artist and also on my debut album, Stoney.

You moved from Syracuse NY, to Texas while you were growing up - how did that shape you as an artist?

I have always been a Texan at heart and a diehard Cowboys fan all the way from Syracuse, NY. The Dallas Cowboys are God’s team that’s why their arena has a hole in the roof, so God himself can watch His favorite team play. My dad is also a big part of the Cowboys family so it’s nice to be able to call Dallas my home.

Do what makes you happy. If that means cars, clothes, and gold teeth then chase the dream.

What are you bringing to hip hop that we haven’t heard before?

Are you conscious of the message that you are sharing in your music with your younger fans?  What do you hope that they can take away from listening to you?

Do what makes you happy. If that means cars, clothes, and gold teeth then chase the dream. I’m just happy my music has taken me this far and hope that my fans can find comfort in what I’ve been creating for them.

Your live shows look pretty hype - how do you prepare yourself for them?

Vodka, beer bongs, camel crush, and having a very good relationship with my fans.

Where did you get that Louis Vuitton guitar from?

Rudy’s Music Shop in SoHo New York City while I was doing some promo with Mass Appeal for my album last year.

Your hair is a big talking point in our office right now. Do you do it yourself?

One day I decided to get braids done and since then it’s been my thing. I’d find hairstylist from Twitter or my friends would make recommendations. Recently though, my boy Ugis in Los Angeles got my fringes going and I’d say my hair is perfect right now.

You’ve had an amazing response to your debut album - how has that felt? And are you already thinking about the next one?

It’s amazing, truly wouldn’t have it any other way. It went so well that I’m aiming to have another project out by this June. We’re calling it Beer Bongs ‘N Bentleys.

Who are some artist you'd Like to  collaborate with?

I am heading to Australia to support Diplo on his tour there. I have a bunch of upcoming shows, we’re pretty nonstop with those. Planning on buying more cars, a house, and looking into opening up a tattoo shop in LA. Let’s get weird in 2017!