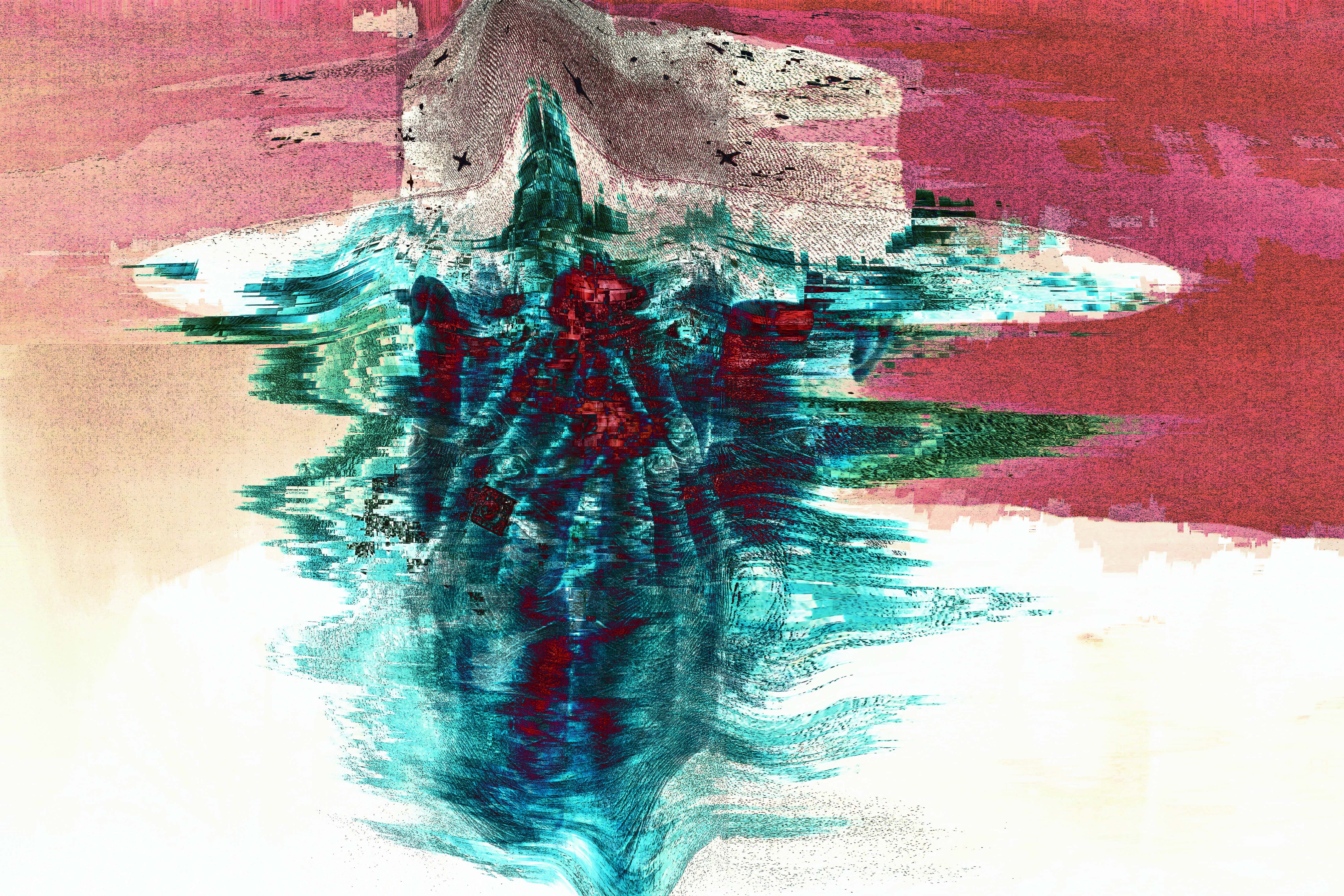 [R]ay Fiasco is hard to define. The 23-year-old is a fine artist, a music video director, a photographer, a human, a Londoner, a sometimes DJ, a friend, a Future fan, a man with many passions about many things. The journey started when he dropped out of a photography degree at the University of Brighton and began sleeping couch to couch across London.

Before long he was involved in the city’s music scene. On his travels, he met musicians and managers and fellow photographers and directors, and, as part of creative collective Asylum 33, began to release material of his own. Then, when South London rapper Bonkaz needed a visual for his first single ‘We Run the Block’, it was Asylum and Ray that he called on. The video – shot in one day – was a big success and gained the attention of record labels and other musicians and the interest began to mount.

So, after a few years, Ray was working with some of his favourite artists (via music videos and photography), all the while never losing sight of his interest in fine art, sketching out ideas on his laptop and publishing them on his Tumblr. Then in 2016, and on behalf of the ICF, he was flown to Italy for the Venice Biennale where perhaps for the first time, Ray realised that his bold artistic dreams were within reach. He returned to London inspired and decided to host his own debut exhibition ‘Light and Death,’ exploring the themes of destruction and rebirth.

Hunger caught up with him to talk fine art, music and surviving as a creative in London

Who is Ray Fiasco?

It’s weird, I’ve spent a very long time trying to figure that out. A lot of people know me for different things, but fundamentally I’m an artist, I’m a creative person,  I’ve done a lot of photography, I direct music videos right now. I’m a director of Asylum 33, but yeah man, I’m just a guy. I’m just here trying to make it happen. 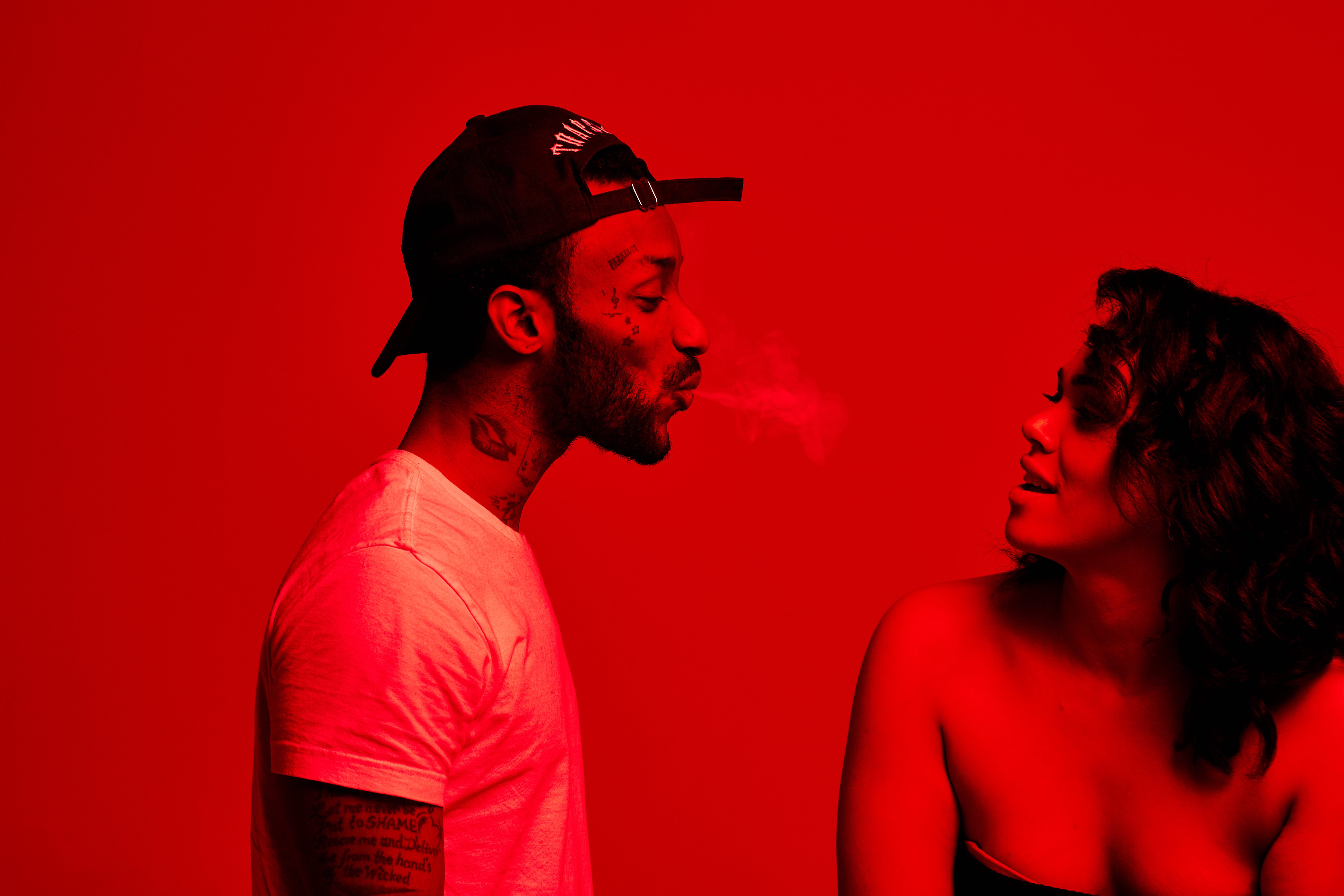 How would you describe yourself?

Where did all of this start for you?

In a notepad. I went to study photography in Uni, while I was there I used to do portraits for people while at work. I used to be in a call centre knocking out these portraits and not trying to get told off [laughs]. At the time, I thought to myself ‘this is a way to get into a concert and actually meet an artist.’ I wanted a credible reason to meet these guys. I didn’t want to just be like ‘hey I love your music.’ So when I was in college I did a portrait of J Cole, when his first album dropped, and I tweeted it. This was like mad early on Twitter and it blew up and got loads of retweets and people were talking about it and it ended up getting to J Cole’s manager, his manager sent his PA to my college to pick up the piece for J Cole to sign it.

So that was like 17/18 years old in college. After J Cole there was Kendrick and that managed to get to him too. Then after that in 2013 I finessed my way in to Wireless with Kojey Radical, finessed my way backstage. That was my sole aim: ‘I’m going Wireless today to meet Jay Z, John Legend, Frank Ocean and Justin Timberlake.’ I met these guys and they all signed my work. That day I just learnt a lot of stuff and that was just my first taste of what could happen if I apply myself and my artwork and just try and get art across into the music world. 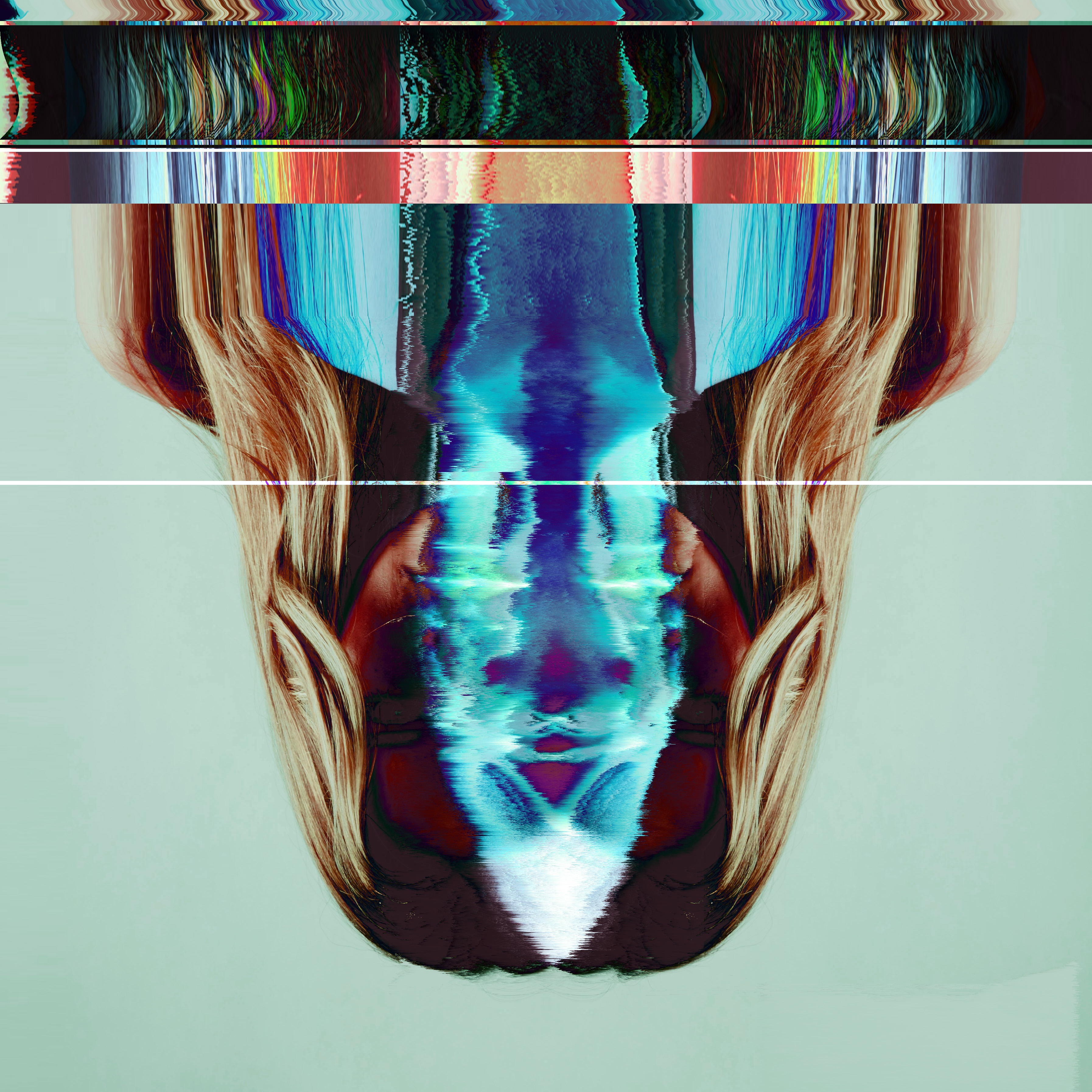 What ties all of these different strands of art together?

Music is very key in my life. More recently I’ve been DJing, not because I want to be a DJ just because I love music so much. I think that’s the catalyst. I used to get in arguments at school because I’d be in a 14-hour art exam and I’m like ‘guys can I not have my MP3 player?’ From then I always knew music was something I deeply cared about. I’m just pushed to create things that people can interact with and come away with something, that’s what I love with music videos. I know how they make me feel and I want to make other people, young people, feel like that. Or that’s why I love a picture, because it communicates who you are, not only who you are but who you can be, everything people can imagine you to be can be in that pictures.

You were studying photography at Uni, but then you dropped out right and moved to London?

I was so determined to become a photographer, to become a creative. I knew that wasn’t something I could have done in my grandma’s house which was where I was living. I was like ‘I need to find myself, I need to find what my values are,’ find what I appreciate in life and kind of be away from what everyone expects me to be. So in between leaving Uni and getting my first place, I was couch surfing and building connections with people, and a lot of that experience of having to get across the city to meetings and just having to survive made me appreciate the expression of pain in modern art, in abstract art, even in music.

I had been feeling that frustration and a lot of other people had too. A lot of people left uni in that same year that I did, I was that first year where uni cost nine grand and I’m just sitting there going to two lectures a week. Nine grand and I’m paying rent and I’m out here struggling? Nah nah nah, these times I could be networking in London. 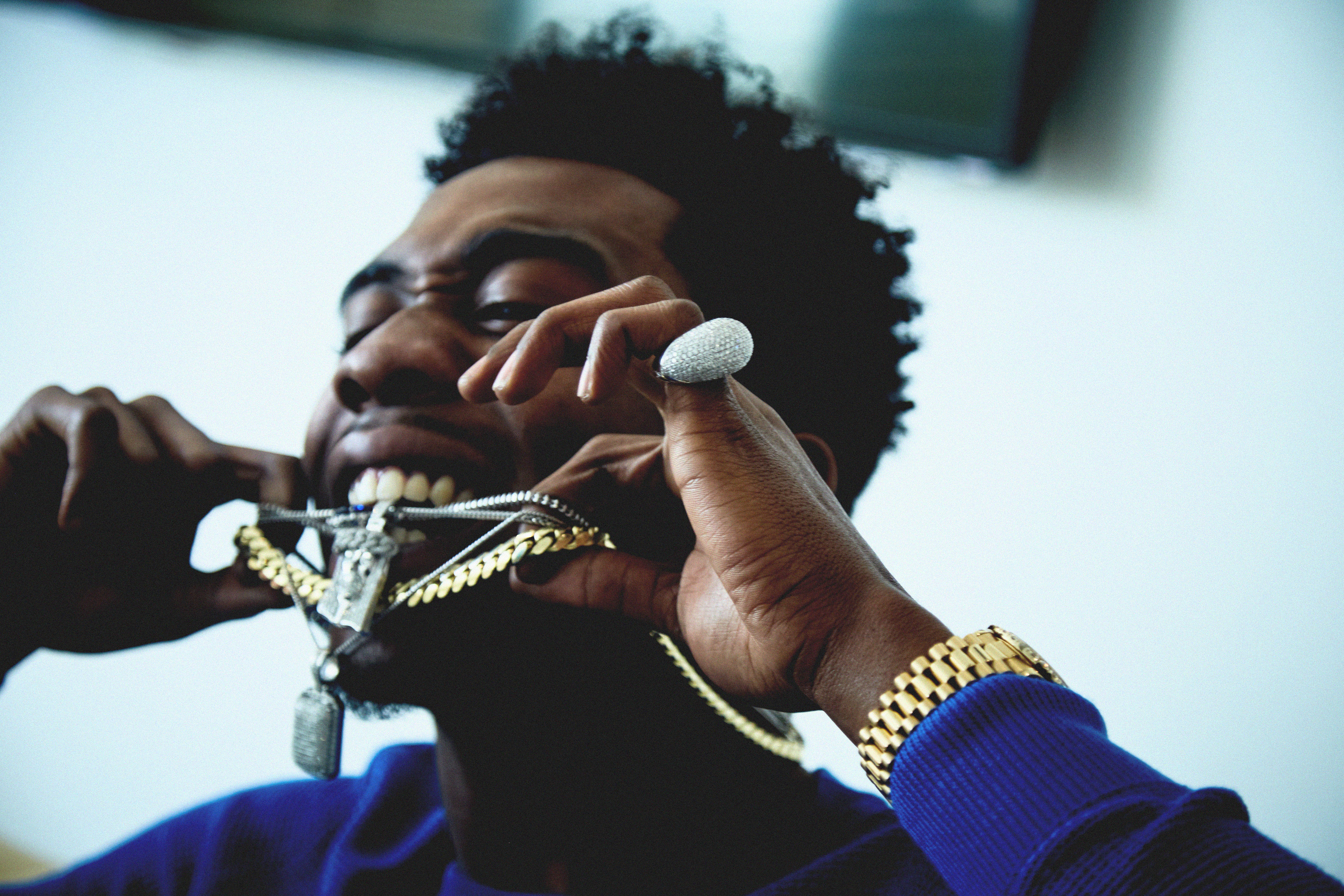 At your exhibition ‘Life and Death’ you talk about destruction and rebirth, why?

I went through a lot of death getting into uni. I was reading a lot of books like The Alchemist and Veronika Decides to Die, and all these things were just impacting me and I kind of realised that you’re going to lose people. I walked around with this thought that I’m going to lose everyone close to me one day, either I’m going to lose them or they’re going to lose me but someone’s going to get lost. Because when it’s all said and done and the social media stuff is said and done, when someone close to you dies it’s like a blade straight through your life, everything else is irrelevant. Death is a massive part of life and that’s why across all cultures and religions there’s a fascination with it. Even in art and the process of changing a colour in a painting is the death of a colour.

So that whole exhibition was just me understanding that, understanding my style of work and not hiding it, not trying to validate it. 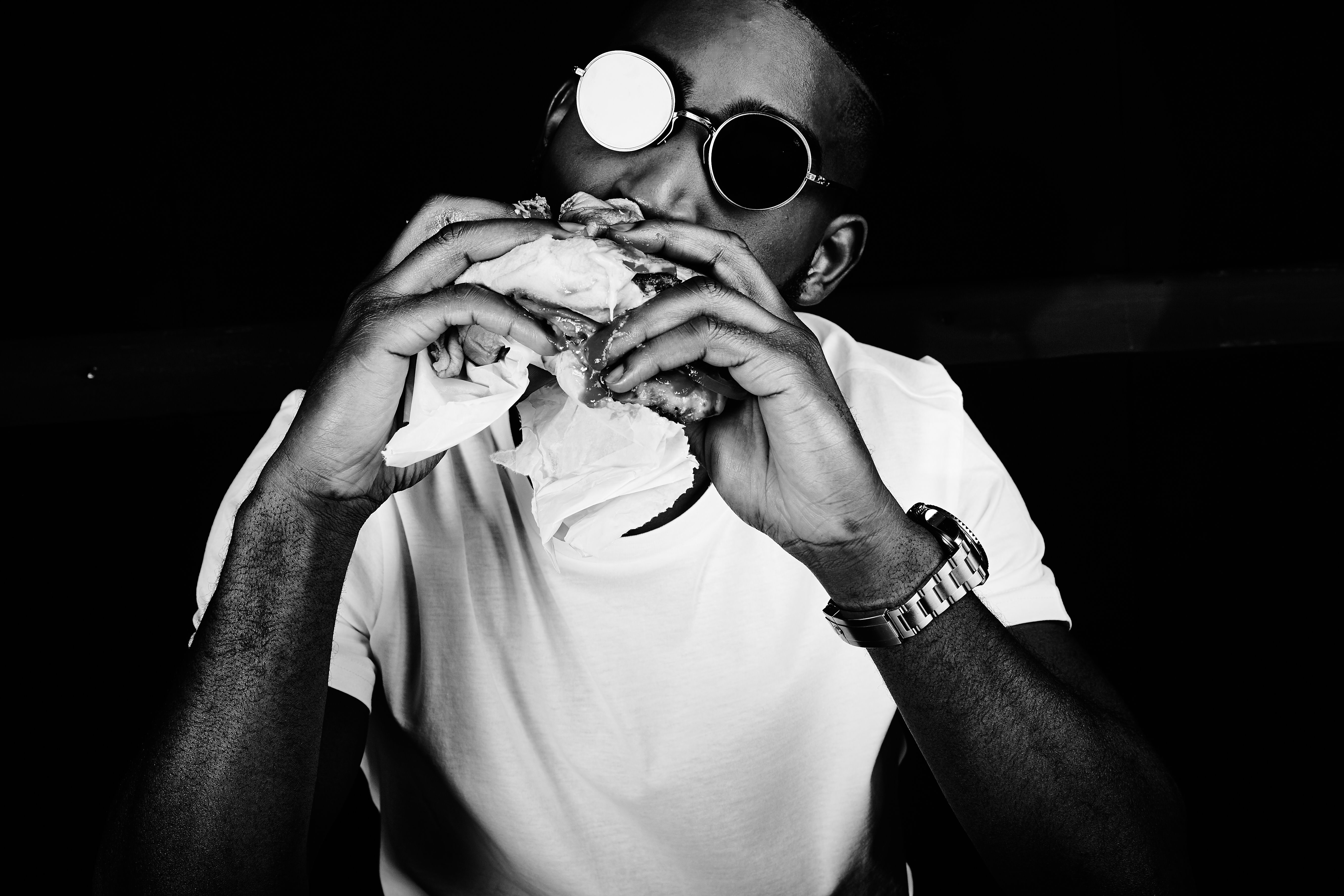 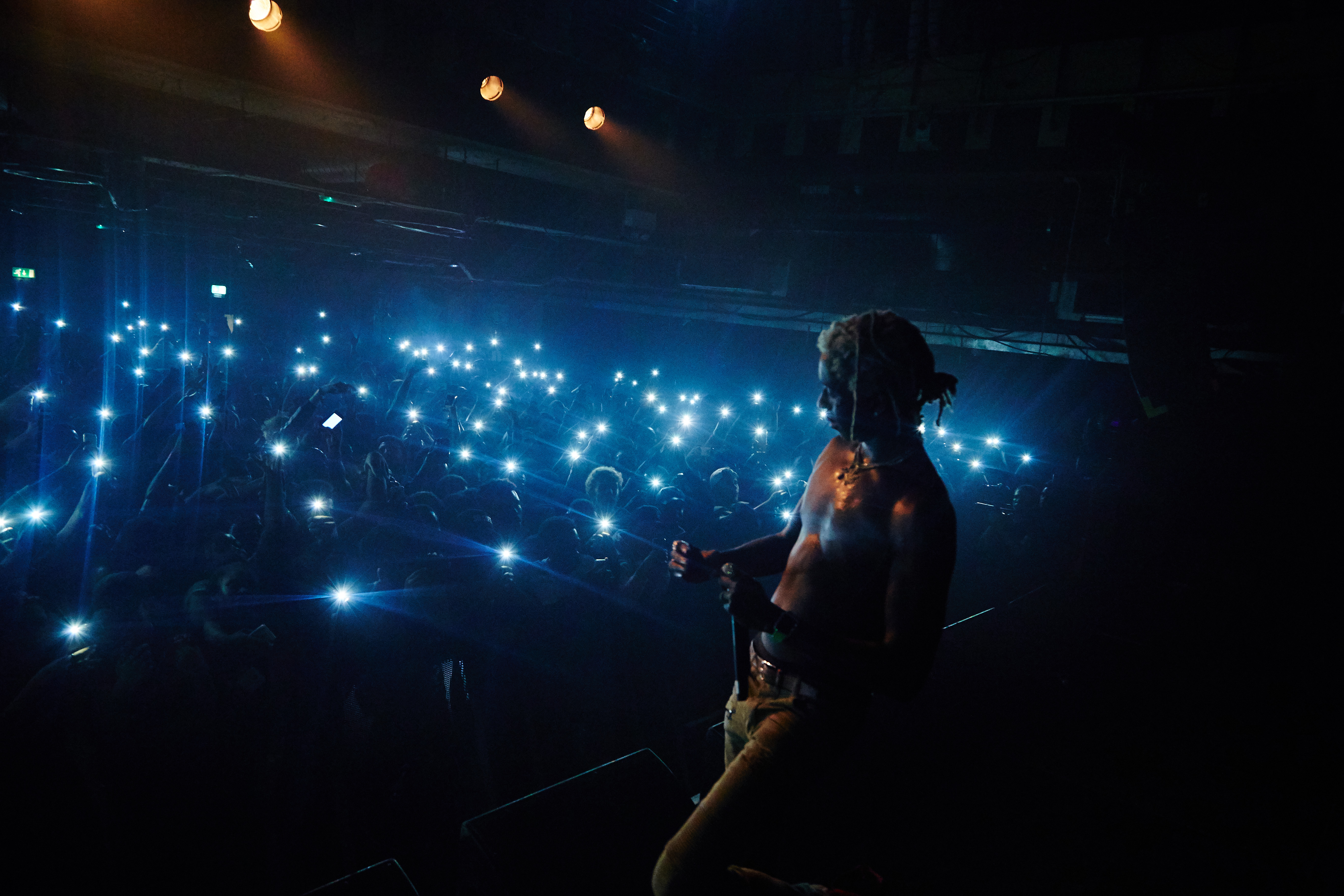 What did taking your work offline and into a physical space teach you?

I prefer the three-dimensional space to the online space a lot and it creates a lot of tension in what I’m doing because we’re in a world that’s dominated by social media. So if you’re popping on Instagram everything is good in life, but I’m a bit more private with how I like to create. With a piece of art I think it’s very important people leave their house to see it, very very important. But how do you explain that to someone that doesn’t care you know? I didn’t even fully understand it until the first time I was sent to Venice Biennale and we went for lunch in Peggy Guggenheim’s house. It was this UAE lunch with all of this royalty there and I’ve gone downstairs and I’ve seen a real life Jackson Pollock, it was the size of this wall bro, the paint was ‘this’ thick. We’ve only ever studied that and seen it through Google images but when it comes to art I’m really trying to get people out of their house, get them to experience something, make it something immersive. That’s why there was music playing at the exhibition. All the music playing were the songs that inspired me, it’s one thing looking at a work in silence but I feel like if you look at it with sound you start to feel it. 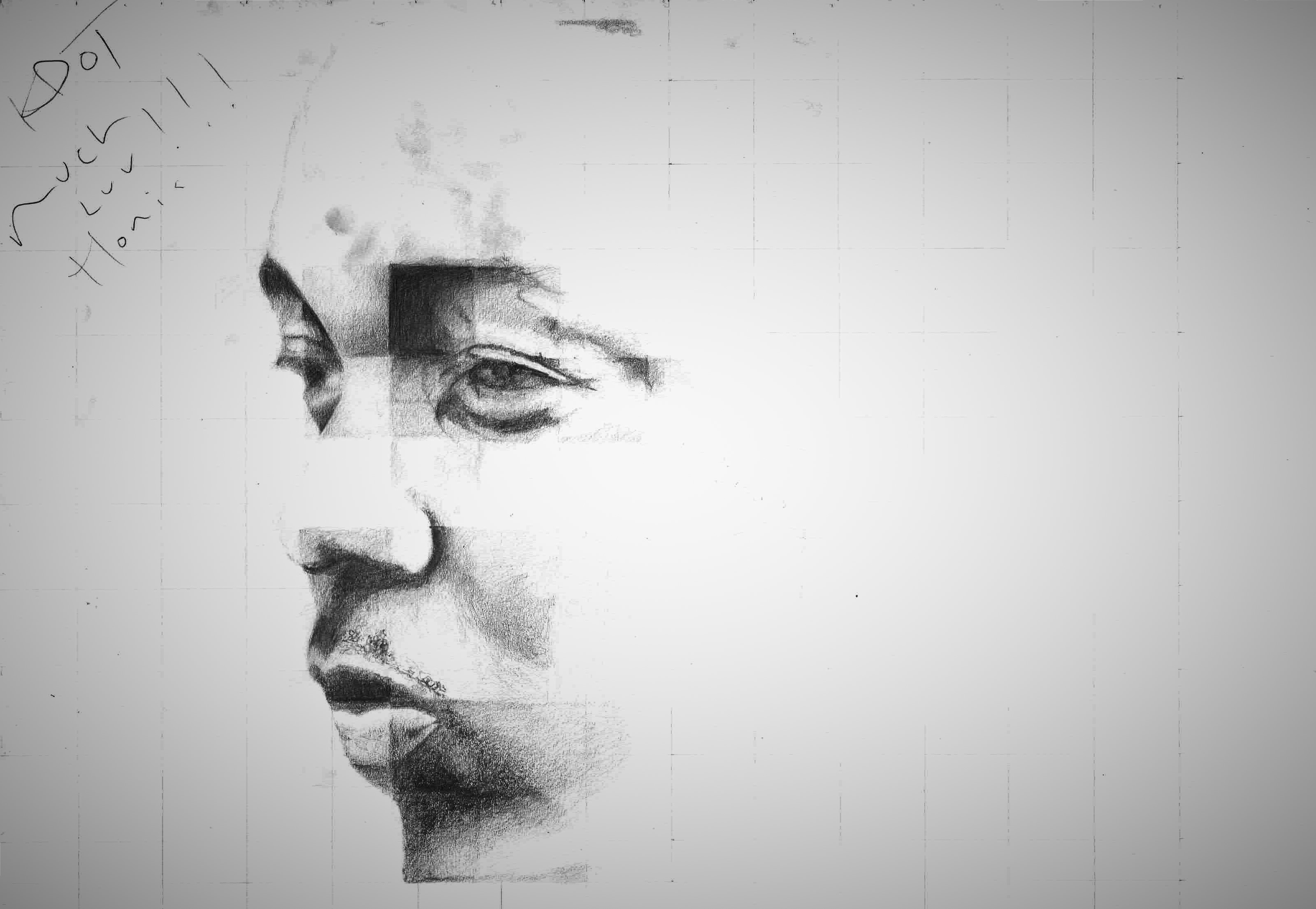 How do you survive as a creative in London?

As a creative it’s really not easy, you have to create to survive and that’s what really people don’t understand from the outside. Yeah my Instagram pops because that’s my job, it’s my job to make things look good, that’s my second nature. But that doesn’t mean things are good. In the summer business pops because everyone’s out, everyone’s happy. In winter if you don’t have clients, it’s a long winter. Little things like that, I think that part of the grind is something we all face as creatives, especially young creatives in London now where the scene is bubbling but it’s not completely…I hate the word… ‘monetised’. It’s not fully commercially viable. Not that that’s a bad thing but if you’re trying to do business transactions, high budget videos or high budget photoshoots or even get a song mixed by a top engineer we’re not quite where NY was in the 90s where money was flying around, you have to just find a balance.

That’s what we’ve been building in Asylum 33 because I’m really not trying to work for someone’s else’s legacy personally. I can’t work in environments like that, I can’t do it, I’ve got to be appreciated for what I’ve created. We need to be more open minded and creative with how we approach things, more experimental because nobody’s trying to get caught in old school traditions that aren’t progressive. I ain’t trying to do that. 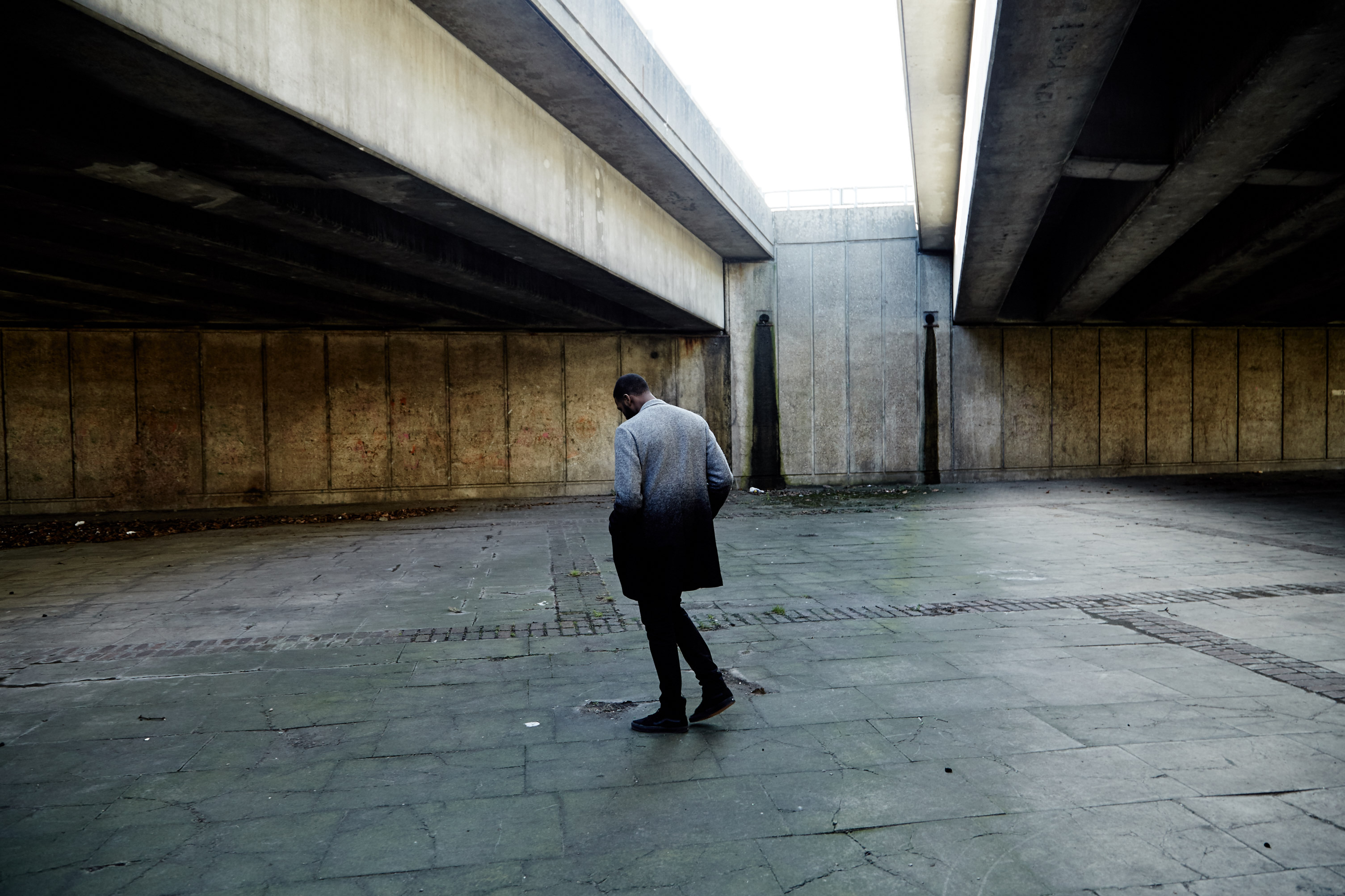 What mark do you want to leave?

I think that the best thing I could do is just be remembered for being me, I just can’t do one thing, I can’t just be a photographer, I can’t just be a fine artist, because for me every single thing that I create is fueled by every other thing I create, and that’s how my system spins.

Whoever’s after me, I want them to be greater than me then I’ve done my job. People hit me up and say ‘you’ve changed my style of photography since I’ve seen you.’ I’ve had kids hitting me up from other countries on my Tumblr and said some mad deep stuff, some real humbling stuff, because they don’t know the situation I’m living in, they just see pictures. People are hitting me up to study stuff, I’m like ”Bro I’ve just dropped out of Uni…’ but if someone can feel that way about this then someone can feel that way about your thing too.