[R]emember the good old days, when you could slap a receptionist on the bum, or hand your suitcase to the first black person you saw in a hotel without anyone having a go at you?

I don’t, because I’m 25 and was raised to believe that sort of thing is really not okay. It’s not like my generation has reached consensus on such matters, but they have at least entered the realm of ‘controversial’, which is progress.

Not everyone agrees. Sometimes it feels like we can’t do anything right in the eyes of our parents’ generation. When we’re not being accused of becoming desensitised ourselves to violence, it’s the opposite: we’re branded the hypersensitive, excessively emotional and politically correct ‘Generation Snowflake’. I first met this new stereotype with confusion. I’d always thought of us as Thatcher’s children, conditioned to be more competitive, individualistic and apathetic than our parents. At least that’s the reality that confronted me as a student activist, working to mobilise for democracy, civil liberties: the old school values baby boomers are meant to cherish so highly. 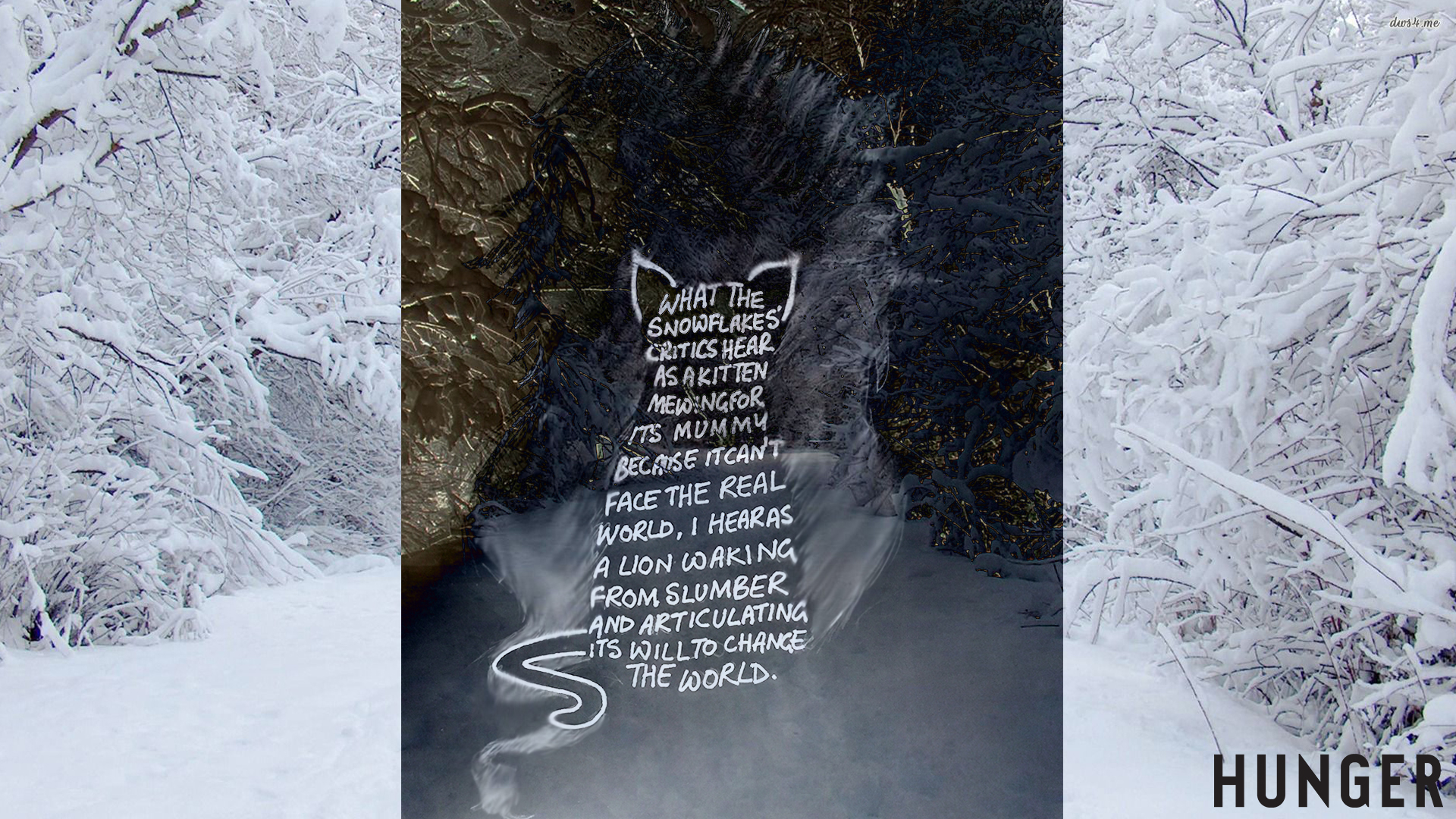 "What the snowflakes’ critics hear as a kitten mewing for its mummy because it can’t face the real world, I hear as a lion waking from slumber and articulating its will to change the world."

On January 30 this year I found myself amidst a young, diverse and vibrant sea of anti-Trump protesters on Downing Street, heartfelt chants erupting around carefully hand-written placards. On this particular demonstration the depth of the rage and solidarity seemed particularly profound. If I had to guess I’d say the reason is that Trump, like Brexit, represents an existential threat to who we are – what past generation’s civil rights movements gave us the space to start becoming: ourselves. And I found myself thinking hey, maybe there’s something in this snowflake generation thing after all. And if so, it’s about fucking time. Because what the snowflakes’ critics hear as a kitten mewing for its mummy because it can’t face the real world, I hear as a lion waking from slumber and articulating its will to change the world.

Arguably one of the most messed up things about our present system is that while we are constantly told we can and should be ourselves, unless you’re a relatively wealthy, white, heterosexual man, being yourself can be a pretty painful experience. In certain, perhaps less visible ways that’s more true for us than it was for the baby boomers. When they were growing up, consumerism was just scratching through front doors and into people’s homes. But belittling, brainwashing and undermining us from infancy is now a multi-million pound industry. And the consequence for Thatcher’s children has been a very real mental health epidemic.

Depression, anxiety, stress, eating disorders and self-harm have reached astronomical levels in the world’s wealthiest nations. In the UK a quarter of a million children are receiving treatment. Many more are not. Self-harm among our youth has shot up 15 percent in three years, with 20,000 cases requiring hospitalisation. When tens of thousands of children are hurting themselves, that’s not hypersensitivity; it’s real suffering. And responsibility for it rests with society, not the child.

"We, born into a violent and divided world, cradle the embryo of a new culture that can find it in itself to respond to trauma with kindness; that we can respect individuality and defend diversity."

Tell that to the string of self-aggrandising (usually white male) writers branding us a generation of censorious cry babies. Much of this moaning is directed at university campuses, mainly because they’re the only public spaces where we’ve had any influence. Their favourite targets are trigger warnings, which alert viewers of potentially distressing content in film or literature (not so excessive when you consider 1 in 5 women are survivors of sexual assault, for instance); and ‘safe spaces’, which explicitly prohibit discrimination normalised in wider society, for example against women, LGBTQ or people of colour. Next to climate change, war, historic inequality, domestic violence and racism, for example, pockets of social life trying to protect people from prejudice hardly seem like the most pressing of social ills. But the argument goes that this ‘snowflake culture’ insulates us from ideas we don’t like, promoting censorship and poorly preparing us for life in ‘the real world’.

My main issue with this thinking is that it’s based on a complete mis-remembering of some golden age of the university when all arguments were had and won on their own merit. What they’re actually remembering is a time before their social privilege was broadly challenged. Ask any student from the 60s who was poor, gay, black, or a woman, even, and you will find things remembered a little differently: as a long, collective struggle against violent discrimination. They’ll remember the ‘brown paper bag test’ to make sure you were pale enough to join civil society organisations, or students excluded for their sexuality. I mean, what the hell is there to be nostalgic about, unless none of those things affected you?

Don’t get me wrong, the 60s were awesome. But they were awesome precisely because they marked a battle for deep cultural change. They brought a youth revolution that protested, occupied and marched in the face of police brutality and social exclusion to spearhead a social revolution. In other words, it was the snowflakes of the baby boomer generation that made the 60s what they were. Ideas have never battled on a level playing field. The arguments made by, or empowering, marginalised groups have always come up against unique obstacles (police batons, powerful institutions, all the money invested in the status quo). And if a safe space does anything to protect against, or a trigger warning anything to validate, the trauma of that experience, what right does anyone with no lived experience of oppression have to deny us that?

"The Snowflake Generation critique is absolutely manufactured by the most privileged in our society, protected by the lottery of their birth from the brutal realities of exploitation and racial, gendered and anti-LGBTQ violence."

The Snowflake Generation critique is absolutely manufactured by the most privileged in our society, protected by the lottery of their birth from the brutal realities of exploitation and racial, gendered and anti-LGBTQ violence. These are not the people who were flooding onto Downing Street last week to stand up and be counted. They are the people for whom most spaces are safe, whose self-image and self-confidence is bolstered every time they see their own reflection in political and popular culture – people who disparage the notion of a trigger warning because they have no idea what it takes to survive trauma.

If anyone’s being infantalised by the system we live in, it’s them. It’s the guys who can’t even be confronted with their own privilege without erupting into bigotry or hurt feelings. That they’re well placed to succeed in ‘the real world’ is hardly a revelation; for centuries, the rules have been written with them in mind. But this system isn’t working out for any of us. Looked out your window at the world lately? It’s a mess. So shouldn’t we be more concerned with fixing it, than being like it?

As a species, we now inherit the power to destroy ourselves, whether through climate catastrophe or nuclear holocaust. (Nice one, baby boomers.) Bearing that in mind, perhaps Generation Snowflake is a necessary antidote; that we, born into a violent and divided world, cradle the embryo of a new culture that can find it in itself to respond to trauma with kindness; that we can respect individuality and defend diversity. If, as both science and history teach us, people have always been snowflakes – completely unique and acutely fragile – then recognising that will get us further than denying it. And a generation willing to protect and cherish those timeless human qualities will be infinitely more capable of creating peace, sustainability and democracy than its critics ever dared think possible.

Taken from issue 12 of Hunger magazine, out now