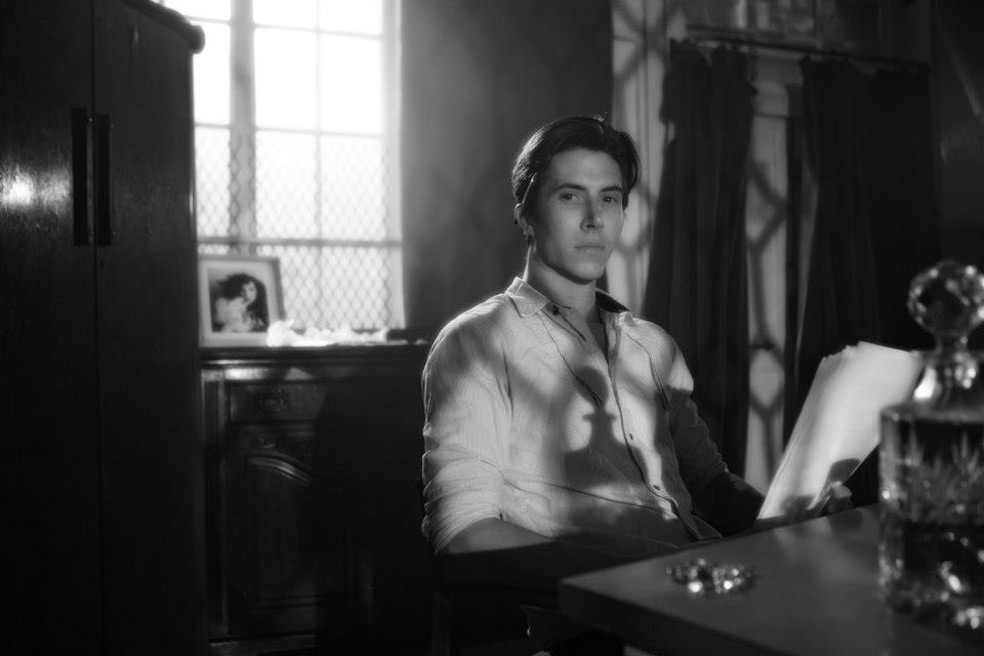 [B]en Charles Edwards, a former photographer, is an emerging director that has established what appears to be the start of a cult fan base through his avant garde and fearless approach to filmmaking. Ben so far has exhibited his photographic work at the Russian Museum of Modern Art, been on the judging panel at the Guardian’s Short Film Festival Awards and directed the celebrated fashion film ‘Giles’, a study of Giles Deacon for Italian Vogue. And this is alongside collaborating with some of the most eccentric and  respected creatives from Zandra Rhodes to Piers Atkinson to Russian artist Andrey Bartenev to Boy George.

Ben Charles Edwards is a towering figure at 6 ft 2  and, at the age of 28, possesses a commanding yet unnerving presence. Enter into a conversation with him and what emerges is profound wisdom from lengthy travel and a thirst for world cultures mixed with perhaps a little brilliant madness too. In the past year, Ben has written and directed a children’s fantasy film starring Rudy Law (Jude Law and Sadie Frost’s youngest son) started a unisex ethical urban clothing range inspired by fringe cultures titled Astray, and is now preparing for his first feature film – Set The Thames On Fire starring one of France’s leading actresses Josephine De La Baume and Frances Barber.

They came at the exact same time actually. I was at Andrew Logan’s place, he is a performance artist with a collective called The Glasshouse in Bermondsey and he is a brilliant glass sculptor. It was there I met a Russian visual artist and curator Andrey Bartenev and he said ‘I’m curating a show at the MMOMA, give me some work, I like it.’ So whilst at Andrew’s I confirmed that I would exhibit at the MMOMA. At the same time, I said to Andrew that I’ve written a short film about my hometown called The Town That Boars Me and I’d love for you to play the butcher who creates the young pig boy out of meat; and he said ‘Yeah sure’. So both of the ideas came hand in hand I think.

TELL US ABOUT THE WORK YOU EXHIBITED AT THE MMOMA?

A lot of it was just friends I had photographed. I had gone back to my home town Woking, to see a friend, so I was waiting in the town square and a girl walked past me that was covered in tattoos; with a shaved head who was about 19 stone. I was naturally looking at her, she saw me and stormed up to me and said ‘What the Fuck you looking at, do you want a photograph’, and of course I said, ‘I would love a photograph!’

So she agreed and I took her to an air field just outside London and dressed her up as an alien, in tin foil and shot her with these big spaceships behind her that were landing in the airfield. I called it the ‘Mean Green Mama From Out Of Space’. That was used as the headline at MMOMA and in the brochures for the MMOMA exhibition. I did that shoot in an afternoon. The whole of the first collection of photographs was based on that character in 2008 I had created. I thought, ‘I can see you as a green alien’, as bizarre as that sounds I thought, great lets shoot this. So this girl, who was just one day on her way to wherever and all of a sudden is on the cover of Moscow’s Dazed and Confused Magazine. It was really interesting for me to see the power of one picture. It was really inspiring. I didn’t know what to expect, I landed in Moscow and a translator from the Museum where the exhibition was being set up met me. The originals had been sent to Moscow for scanning; I walked into the hall exhibition area where I saw that my photos were 15 feet tall, I didn’t know what to expect in terms of scale. There wasn’t a bare wall in the place, and with all the injection of colour, it really did feel like you were being transferred into a different realm. It was all based on a  Post Human existence concept, with several amazing architects that had submitted buildings that looked like they were floating in the sky. So it really looked like you were being transplanted and on the opening night with the performance artists and light shows, it all looked like you had skipped forward a few thousand years.

TELL US ABOUT YOUR FILM THE TOWN THAT BOARS ME.

As a kid I used to watch a lot of  John Waters movies, I was about 10 years old, watching Hairspray and Cry Baby, and as I got older into my teens I started to look over his films like Eat Your Make Up and Pink Flamingos. He made those with his friends and with no money and they’re brilliant. They are some of the best movies of that genre. That idea was an inspiration – not aesthetically, the plots or the context – but the inspiration was that if you want to do it, just do it. All you need is a camera.

I made The Town That Boars Me far before anyone used their iPhones. I shot it on mini DV tapes – I had about £15 and a friend and I bought a bunch of DV tapes, we bought some biscuits and we stole a pigs nose. And within a space of a week, whilst meeting friends and at parties, I bumped into Sophie Ellis Bextor, and I said,  ‘I’m making a film in Dalston tomorrow I’d like you to be in it’ she said, ‘Yeah sure’ and that’s how everyone came on board. The whole story was written with Sadie (Frost) in mind when I was reading about her and the issues with the press. So when I eventually met Sadie I said, ‘You need to be the Queen of this town in this film and you need to eat the pig in the end’.

A LOT OF YOUR STYLE IS ROOTED IN BOTH EARLY 20TH CENTURY FRENCH CABARET AND ECCENTRIC BRITISH ELEMENTS, IS THIS A DIRECTION YOU’D LIKE TO EXPERIMENT WITH FURTHER?

Yeah definitely. It’s interesting that many people pin point where a style comes from, people say it’s like Tim Burton’s but I don’t think so. I like some of Tim Burton’s earlier work, though but don’t see myself as similar. I think what you’ve pin pointed is the most accurate description of my work, but it wasn’t an intentional decision. I think it wasn’t a conscious decision, it was just absorbing things. We had a French babysitter when I was a kid called Armelle so I guess that’s where it comes from. She used to show me French movies; another babysitter when I about was 10 years old, showed me Pasolini’s Salo/120 Days Of Sodom, which was shocking for a kid to see. I remember watching that back to back with Pinocchio, which creates these bizarre intersections I guess. When I look at my work, it is a cross between something like Pasolini and Disney; it’s got this raw vile underside and a melancholic feel.

WHICH FILMMAKERS HAVE INSPIRED YOU?

It’s probably Disney and Pasolini really but also filmmakers like Peter Greenaway, especially The Cook, the Thief, His Wife & Her Lover, I loved that, it’s without a doubt  one of the best movies ever made that has a very British cast and a very European feel to it as well. But I think subconsciously, it’s things from childhood that got me involved in visuals in the first place.

PICTURE BOOK OF LONDON TOWN IS A SOMBRE AND DARK COLLECTION OF SHORT STORIES ABOUT LONDON. IS THIS YOUR VIEW OF THE CITY?

It is one of  my perceptions of London but it’s not my over all perception of London. London is filled with contrasts and things that feel so familiar and living in the East End, where I’ve lived for so long, I’ve seen so much change. And one of the films from Picture Book Of London Town, called Appetite is about that. It has Princess Julia in it, in a grimy East End cafe in a ball gown wearing million dollar jewels  and she’s stuffing her face with dirty sausages – now that is definitely my perception of London or a particular part of London, in the sense that you can be a star one minute and poor the next. You can go from East to West in 20 minutes and see all of those contrasts.

YOUR AVANT GARDE APPROACH TO FILMMAKING ALSO SEEMS TO HAVE INFLUENCED YOUR CLOTHING LABEL ASTRAY. WHY DID YOU FOCUS ON ELEMENTS OF HAITIAN CULTURE?

I was in New Orleans with Burberry model Oxford Neilson who I had set up the label with. He was modelling over there and we were in a cafe and the lady that worked there came and placed a pile of salt in a pattern, which was reminiscent of one of the designs of the clothing, so I asked her what it was and she said it was for protection so I asked her why but she just said, ‘No enjoy it’ and she walked off.

I have a picture with this salt pile under a chair, so perhaps I should have the design printed on some clothes, maybe we could make these protection symbols. However I’ve altered it slightly because I don’t want to tread on the feet of a religion or belief that is sacred to people. So yes, Astray is inspired by elements of Haitian culture but it has been altered.

I’m getting the chance to work with a lot of people that I’ve wanted to, for example director of photography Sergio Delgado is actually collaborating with me on my feature film which is brilliant and everyone that I wanted for the cast accepted. So all of that aside, somebody that I haven’t considered but would love, would be Rudy Law again, the kid from Suzy Lovitt. I’m writing a short film again called Dotty which hopefully he’ll star in. You get much more from a 10-year-old, who isn’t aware of what he’s saying or doing and just goes for it.