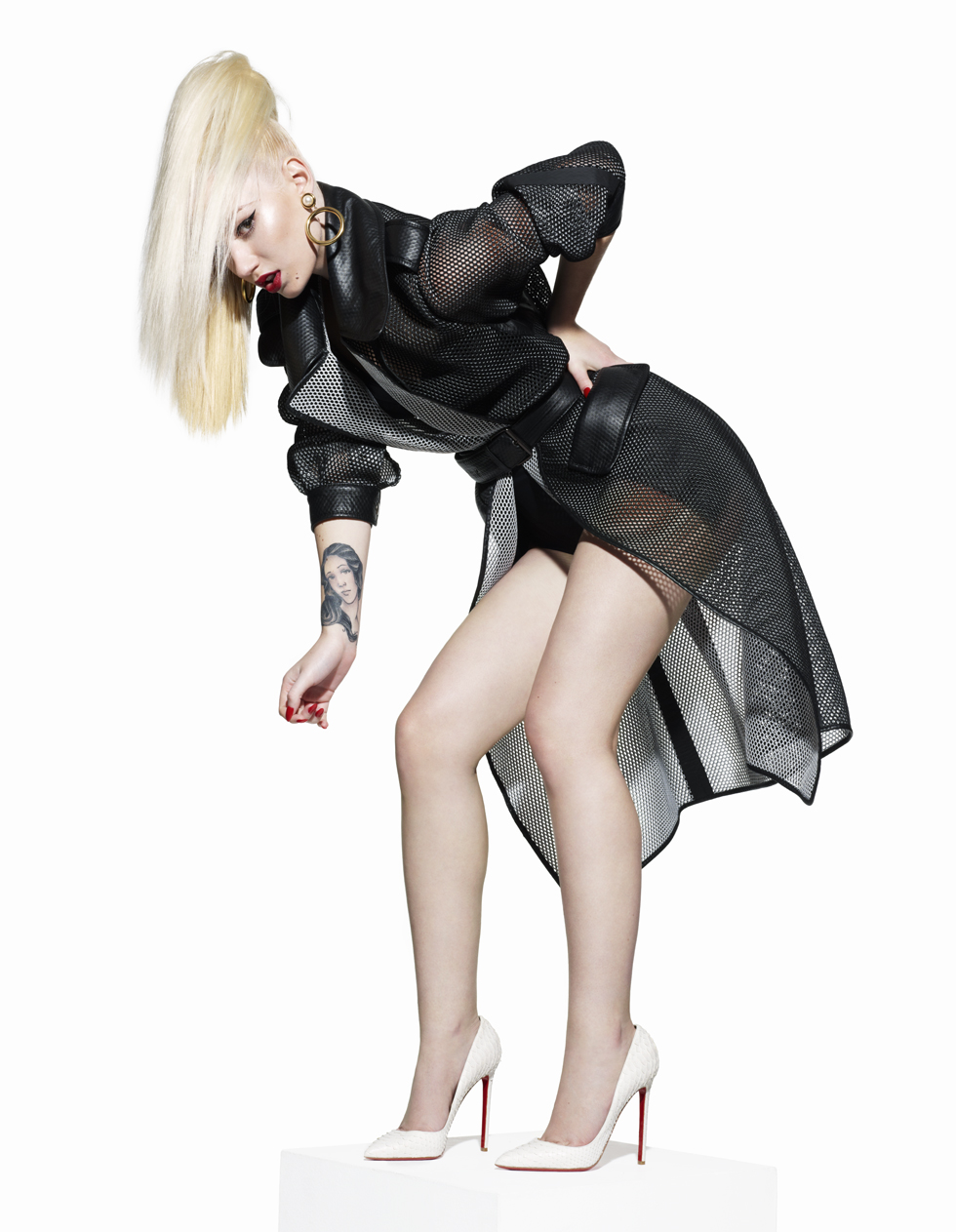 [B]orn Amethyst Amelia Kelly, the unabashed female rapper is better known to her fans as Iggy Azalea. “Iggy was my dog; he was named after Iggy Pop,” the Australian MC (yes, Australian) tells us. “And Azalea is the street where I grew up; together
they have the right amount of syllables to make the perfect name.”

Iggy has a strong personality and image when she is on set and in character: her long blonde mane is permanently tied into a tight ponytail, and her lips are, in the words of Kim Carnes, “devil red”. She’s very direct, and speaks with a level of front. “I think stupid people are surprised that I’m Australian. It’s small-minded; we live in a global community, but I suppose some people still are small-minded.”

A white girl from rural Australia, raised in a town with a population of 3000, isn’t your archetypal rap star. “I grew up in Mullumbimby, and it was a very strange town. It’s not the kind of outback where bogan Aussie blokes run sheep shearing businesses. It’s more like this subtropical [region] with extinct volcanoes that now have rain forests growing all over them – everybody lives behind the mountains, and they don’t wear shoes to town.”

Right now, we’re in an era where the influence of female rappers is ever-growing, and Iggy is one of the most promising new female MCs. Last year she became the first female and first non-American to be featured on XXL Magazine’s annual Freshman class; and earlier this year she was signed to Mercury Records in the UK.

On a dreich Saturday morning Iggy turns up at our London studio sans makeup and signature ponytail, without which she appears almost shy. In her slight West American twang, she asks for a cup of English breakfast tea with three sugars.

Six years ago, a 16-year-old Iggy Azalea landed in Miami with the intention of leaving Australia for good. And that she did, even though she only knew one person in the US at the time – a guy she had met on a rap music website. “His name was Derek; he was literally the only person I knew. So I was like, ‘Well, shit, I guess I’m just going to stay at Derek’s house. I hope he’s not an axe murderer.’ And he wasn’t. He picked me up from the airport with his friends on 4th of July. I remember it was raining, and there were fireworks going off.”

Reminiscing about her early days in the US, Iggy tells us about the time her American work permit was made official. “I felt like I was good enough to live in the country I wanted to be in. Before that, everybody would always say to me, ‘Why don’t you get married?’ And I would say, ‘No, because if I have to get married, then I don’t deserve to be here. I want to be here doing the thing that I’m here for, which is rap and not pretending to be married.’ So when I finally got my visa, I was so happy. I actually cried from happiness in Las Vegas like a loser.”

Around the age of 12, Iggy got into rap music.“I liked Missy Elliott, Outkast, Ludacris and Tupac, of course. But also I really liked people who were these caricatures, larger-than-life characters, who had crazy visuals.” She saw rap music as a form of escapism, and it confirmed to her that she was more suited to another continent, half way around the world. “I never felt like I fitted in, so I liked seeing characters who didn’t necessarily fit in their environment. And those were the kind of artists I was drawn to.”

Iggy is in the process of writing her debut album The New Classic in a small village in the Welsh countryside. Her first single “Work” had its first spin on BBC Radio 1, receiving very positive reviews. “The album was supposed to be out last year, but I got a bit off track with creating. But now I feel ready again, so it’s going to be out some time in the summer. It’s going to be a mix of electronic music and hip hop, not in a polished way but in a grimy way.”

Rap is storytelling, and Iggy does it very well. Her favourite personal lyric is: “It’s you that I’m trying to get to heaven with,” from a song called “The Last Song” on her first mixtape The Ignorant Art. “I just like that lyric. Even though it’s eerie to think that dying could be romantic, to tell someone that they’re the person you would want to see in heaven… that’s so sweet. I would want a boy to say that to me, in a weird way, so that’s my favourite one.”

“I made The Ignorant Art about a year ago. I was living in LA, and I met some guys who I just clicked with. I was watching a lot of Basquiat films [at the time] and liked how, in one film, Basquiat says to Andy Warhol, ‘Do you want to buy some ignorant art?’ And he has these tiny paintings, and Andy Warhol buys one. I thought that was really cool; the pictures were so crudely drawn and rough. I wanted my music to sound like that, like they were recorded in a garage and were all broken.”

Last October a follow-up mixtape, Trap Gold, further established that she was growing in confidence. Almost wholly produced by Diplo, it combines trap beats with Iggy sounding more poised and bolder than ever.

As the interview progresses Iggy becomes more relaxed, and increasingly animated in her storytelling, “I know all the words to ABBA although not on purpose,” she tells us. “My mother is the biggest ABBA fan. Growing up, we had to listen to it all day long. I’ve listened to ABBA as much as if you worked in a department store at Christmas, and you listened to Christmas songs. I hated it. My mother made me and my sister dress up as the two women from ABBA on Halloween,” she continues. “I was so mad at her for doing that. We were in these white silk tunics with blue cats on them, I was in one, and my sister was in the other. I just hated my mum for it; I wanted to kill her. We won the competition at the Halloween party but yeah, ABBA…”

In an industry traditionally dominated by men, Iggy is glad to have found a friend in fellow The Hunger cover star, Rita Ora. “I’m friends with a lot of boys – being in the music industry as a rapper: it’s all men – but I really like my friendship with Rita, because she’s a girl, and it’s just a different vibe from being stuck with boys all the time. It’s so masculine; it’s difficult. It’s a nice welcome break to be able to paint your nails, and order desserts in hotel rooms.”

I ask if the two of them get up to anything fun together. “No, not really,” Iggy says. “My life’s not as interesting as it seems. Really, nothing funny happens to us. We just work all the time.” Somehow I don’t believe that for a minute.

On the day of the interview Iggy tells us she has over 180,000 followers on Twitter. Does she interact with them? “Yeah, I do. I talk to them every day. Mainly I just ramble on, but they seem to like it.” What is the strangest tweet she has ever received? “People tweet me insane stuff all the time. The creepiest tweet I was sent was someone saying they wanted to rub me and Rita Ora in mayonnaise, and do a body slide across us. I thought that was kind of weird!”

Iggy is very careful, even when tweeting, not to make any mistakes. The last thing she looked up on the internet was: “How to spell Chanel! It’s true. When you tweet, sometimes you make little grammatical errors, and people are assholes on social media. So now I get paranoid. Of course I know how to spell Chanel, but I just had to double-check it wasn’t Channel, just in case! It makes me nervous now; I spellcheck everything.”

Iggy is a rapper who likes to remain in control, and she’s strict about being in charge of the Iggy Azalea brand: “A lot of people absolutely can’t stand me in the music industry. They say I’m insane because I need to have so much creative control. They say I’m unmanageable, but I’m not. I just know what I like. I’m obsessed with it. If you can’t control it, that’s like having somebody else paint your pictures. How could you do that? I never could.”

Unsurprisingly, Iggy is very consistent with her image, she has always had long hair, and it’s all her own. “I would never change my hair, because it would make me go crazy. It’s the one thing I still can’t change. I would cry. I’d absolutely not be Iggy Azalea or Amethyst Kelly; I’d be some other girl,” she says. “I wouldn’t know who I was in the mirror. If I had black hair, I’d look like a witch. My name would be Chloe Stamford. That’s the name I tell people when I don’t want to talk to them, I tell them my name’s Chloe Stamford.”

I ask her who Chloe Stamford is: “She is this girl I used to know growing up. She was mean to me. So, now when I want to be a bitchy diva girl, I’m Chloe Stamford.” The camera stops rolling, “Sorry to mention Chloe Stamford. She wasn’t a horrible girl; she was just popular, and I wasn’t. Her mother works at a newsagent’s in Mullumbimby, so whenever I’m on the cover of a magazine, I order in a copy specially.”