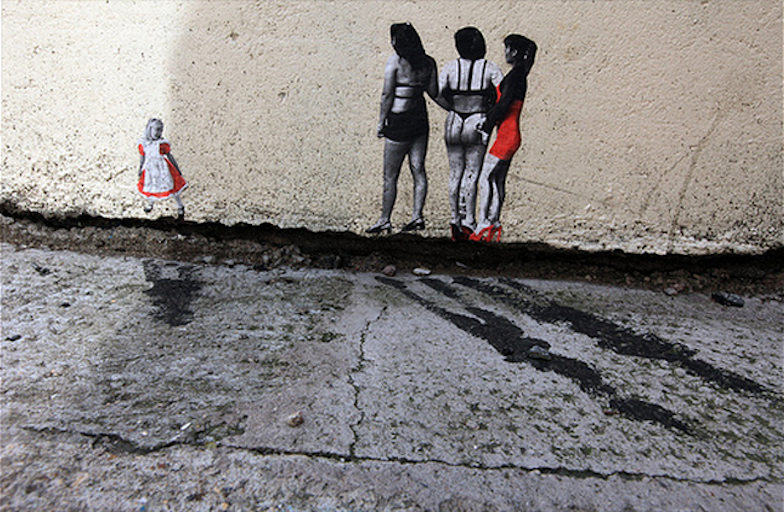 [M]exican artist Pablo Delgado moved from a small town in his home country to London almost three years ago to pursue a career in art in a city that afforded him more opportunity than he had ever previously experienced. Here the 32-year-old street artist tells Hunger TV how London’s streets and our throwaway culture inspire his work, why street art is definitely not over, but why East London might be.

HOW DID YOU GET YOUR START IN STREET ART?

It was an unconscious thing. I suppose I got inspired and influence by walking the surroundings of London, and that mixed with a claustrophobic feeling that, at the time, got me to open the door and walk the streets. So I started pasting little doors on walls, and they evolved to people that came from them.

WHEN DID YOU REALISE THAT THIS WOULD BE YOUR CAREER?

I still haven’t realise that this is my career! When I started painting six years ago the idea of doing art got stronger; before that I was jumping between doing some short films and graphing design, but everything without a solid ground. Street art became part of it when I got to London but I don’t consider myself a street artist, I need to be here longer and I need to practice more for it to be a part of me.

WHY DO YOU FEEL THE NEED TO MAKE YOUR IMAGES SO SMALL?

It’s a mix of things. We need to be less. We are too many in the world and that small size is the opposite of the stupid necessities and immense resources that we use. And we need to be discreet, it’s a feeling that I am doing things that I shouldn’t be, in places that don’t belong to me to keep the idea not so visible and uncertain.

WERE YOU NOT WORRIED THAT PEOPLE WOULD NOT SEE THEM?

No. Not being obvious was the purpose.

WHAT DOES YOUR ART REPRESENT?

It pretends to be abstract. They are symbols in a conversation or in contradiction followed by their shadows, and those symbols can become a bit surreal. Shadows are our only belonging, the rest are just props in the picture.

Everything that comes around, details in little things; bits of conversations, words, fragments of images, music, news,  moments, it can be anything really, social or imaginary. At the moment  to detach things from its source,  and make them individual is a big source of inspiration.

YOU ARE ORIGINALLY FROM MEXICO – DO YOU KEEP UP TO DATE WITH THE ART WORLD OVER THERE?

I try to be in contact but it’s not always possible.

HOW DOES IT DIFFER FROM LONDON?

Things happen in a different scale, but its the same routine, artist try to be watched and heard, but with less doors to knock on than London, and with less time to do it. You need to work harder. Here they’re are more artists concentrated, more competition, but there is more art and more people that support it.

WHAT DO YOU LIKE ABOUT THE LONDON ART SCENE – DO YOU HAVE MORE FREEDOM HERE?

The art scene is great, there are a lot of things happening everyday, and that gives you art in your face. In Mexico it’s more about the place, colour, and contrast in social aspects. Here there is cultural richness, the global moment happening and the art itself that inspires more art. The freedom is the same, but the drive that the place gives you is different. Living in London I worry less  about everyday life.

HOW DO YOU FEEL WHEN PEOPLE PULL YOUR ART OFF THE STREET -IS IT ANNOYING OR ALL PART OF THE IDEA?

It’s good! Seeing them dying, trying to become moments, or memories. the shadow makes them linger a bit more.

SOME PEOPLE SAY STREET ART IS DEAD, DO YOU AGREE?

Not at all. Street art is still a fairly recent term, a word to label something that has been for a  long time. It’s probably because it’s been sold now that it detaches from its original idea and people believe its dead; or because there are no filters and everyone has being doing it, including me, so you have a fever that at some point will fade. But that doesn’t mean that will kill it; its becoming part of the collective awareness and blending entirely with London’s culture. We need that free channel for contemporaneity, street art is ephemera and continuously needs to be retold.

PEOPLE ALSO SAY THAT EAST LONDON IS ‘OVER’ AS IT IS BECOMING VERY MAINSTREAM – AS A WHITECHAPEL RESIDENT WHAT DO YOU THINK ABOUT THIS, DO YOU AGREE?

Maybe yes, but people from overseas arrive everyday from all over the world to live here, that makes the entire of London mainstream. For the world, this city has always had the attention; East London is just getting crowded.

WHERE DO YOU SEE YOUR ART PROGRESSING IN THE FUTURE?

I don’t know. I like to jump and try other things, maybe I’ll develop more installations or scenarios, maybe become entirely abstract or even more minimal. Let the miniatures evolve into something else. Who knows…

To win a limited edition Pablo Delgado print, The Soiler, send an answer to the below question to editorial@hungertv.com by December 24th. This print is one in a series of four and Pablo Delgado’s work can be bought at Nelly Duff in Columbia Road, Shoreditch or online at NellyDuff.com

NAME ONE OTHER IMAGE, BESIDES THE SOILER, IN THE NELLY DUFF PABLO DELGADO SERIES.