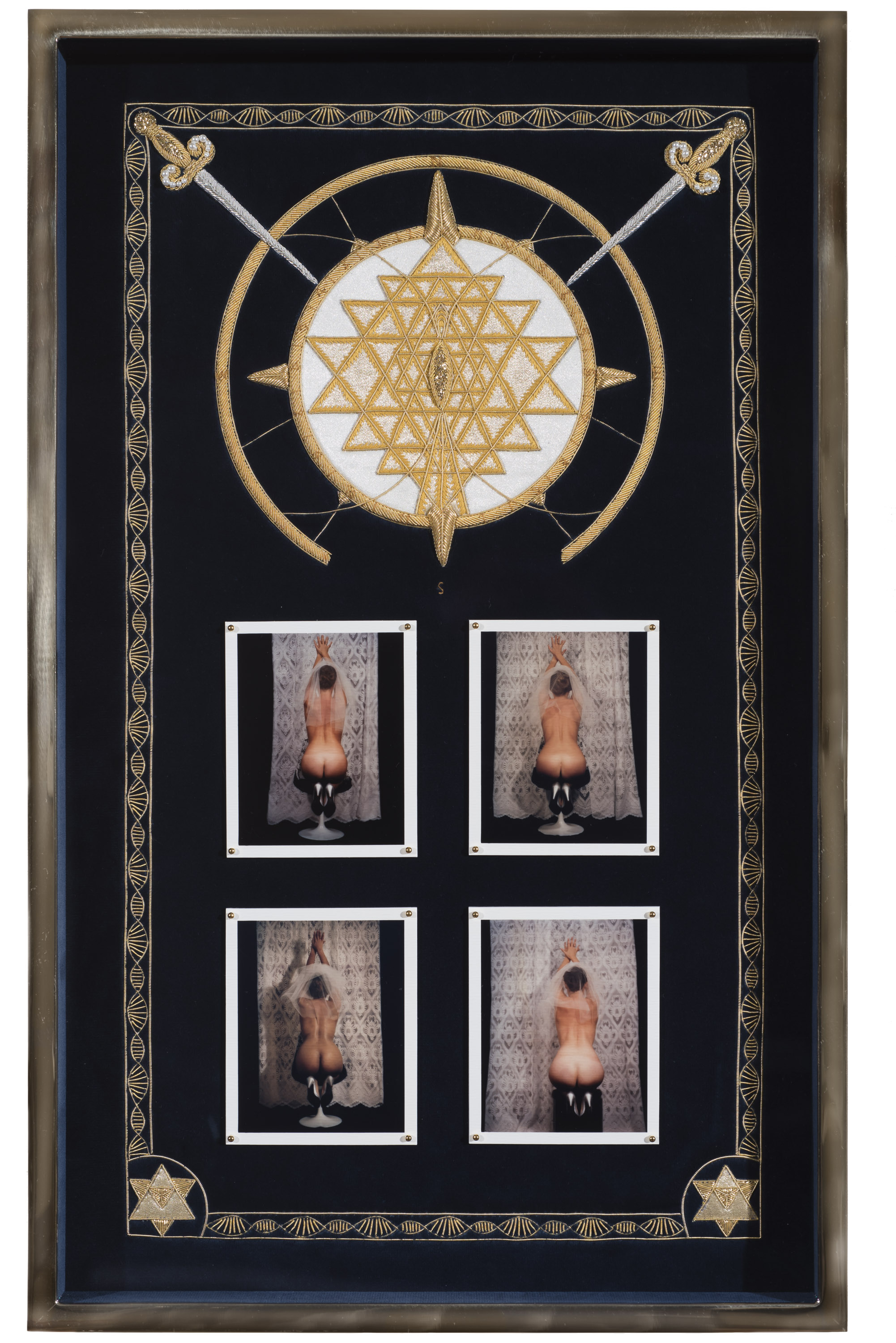 Hidden Within, artist and photographer Sam Roddick’s ‘homage’ to Mollino opens tomorrow at the Michael Hoppen Gallery in Knightsbridge. Using Polariods as her inspiration, Roddick is focusing in on the subject of voyeurism and the male gaze as a means of exploring the related notions of cultural sexual shame and anxiety that exist in society. The images are all named ‘Sophia’, linking to the androgynous symbol which is thought of as the original state where god was born from.

We spoke to Sam ahead of her opening. It’s a long interview, but it’s really worth the read.

So you sold Coco de Mer, after ten years?

Yep, I sold it three years ago. Best thing I’ve ever done was opening it up and the next best thing was selling it! Those ten years of working there was my education on many different levels. I loved the creativity of designing the products and running the store etc. but also, the customers became my university into understanding our cultural relationship to sex. At the end of the day most people don’t go to their doctors and talk about sex. A lot of people hide their own issues around their relationship with sex from their own partners. They don’t talk to their family and they aren’t even really going to fess up to their friends much, as there’s so much judgement held in sex. So they would come to me, on the shop floor. I had 10 years of confessions from all around the world and in that sense I was in a very privileged position and that gave me a unique insight.

And what conclusion did you reach with that insight?

We’ve got our relationship to sex arse backwards! I think in ancient cultures there was much more of a recognition between, for instance, sex and agriculture. They were very much linked because most societies were very much dependent on crops so fertility was integrated into the way that we perceive life. Phallic symbols, things like lingams and yonis or the Sheela Na Gig, didn’t have so much to do with genitalia but more to do with fertility worship, which is of course linked to agriculture. The way we viewed sex in ancient civilisations was very much linked to the cycle of life, rather than to cock and a fanny!

Do you think the link to that cycle has been lost?

It has been lost. Sex is so much more than procreation. And that’s where religion got it wrong, by linking it to having babies. When you look at the ancient civilisations it was much more linked to the secular mystery of life. We didn’t know where life was springing from but it was constantly regenerating itself. I think from a philosophical perspective we need to have an appreciation of that mystery, as that’s actually what laces our pleasure. And in terms of sexual content I just don’t see it out there. 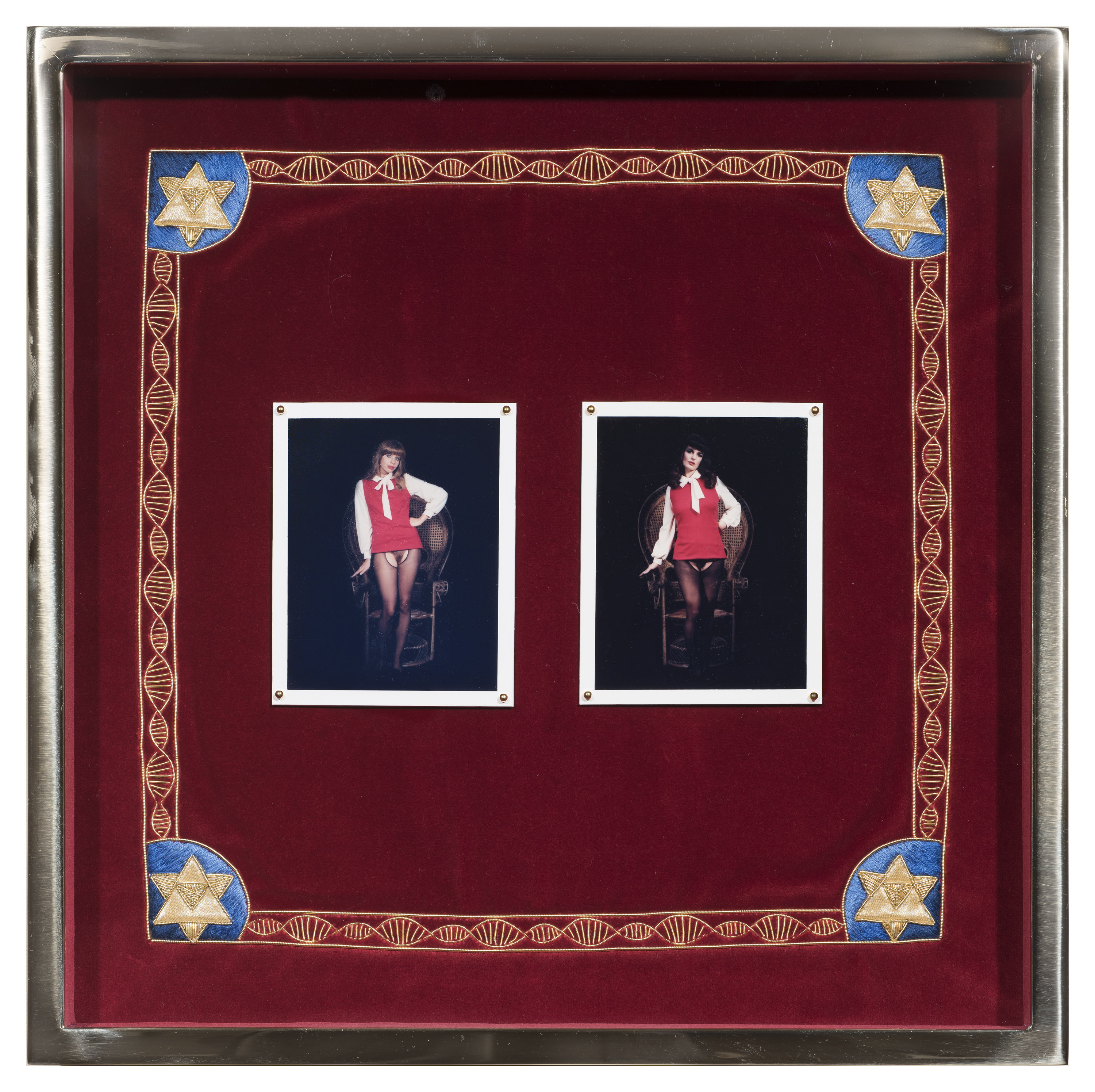 Why Mollino as your muse?

I chose him because I love him. I think from an aesthetic perspective his work is very beautiful. But also, like all things that I’m interested in, he made me feel quite uncomfortable. Anything that does that is a point of curiosity for me, because I’m interested in sexual psychology and I’m interested in anything that I feel I’m at odds with. And when you look at his book, Polaroids, you pretty quickly realise that there is something going on beyond knowing what it is for. You don’t know if these are fashion images; if they’re public or hidden. You can see there is a serious element of obsession. And after a while I realised they are very tightly styled – all the hand positions mirror each other, to the point of how far the fingers are apart!

He was completely obsessive.

Yes. So it clued me into how obsessive he was and I was curious about what was driving him and why it was driving him. And I loved the sets which are so alluring it’s captivating. But I started to realise [when I looked at the images] that the women weren’t expressing themselves at all. He was creating this kind of ideal and there was a perfectionism in it that I found was very similar to the way we, culturally now, treat women and sex – this over idealisation of it. We’re chasing this ideal beauty which actually has no baring on our experience.

Yes. And Mollino is really one of the best examples of fetish photography. But also, he was objectifying women in a way that I hadn’t really seen before.

The female as an object?

Yes. But his images are also about sexual objectification. And I don’t think we realise the huge impact that sexual objectification (turning sex into an object that stands outside of us) has on us. For instance, turning sex into a technique is objectifying it, because it says there’s a technique beyond who you are, how you feel and who you give it to. But sex isn’t an object, it’s an expression. And at the very heart of that expression is your emotional wellbeing as in how emotionally aware you are. And I was really interested with Mollino because it seemed to me with him there was something sexually at odds with these photographs, like there was a disconnection.

Which you sought to address in your work? Talk us through the process for Hidden Within...

I was obsessed with Mollino when I sold Coco de Mer, so I already knew I wanted to do a project on him, literally get into the psychology of who he was. I decided I wanted to recreate his images, but with a difference. I tried to adopt his gaze as much as possible but with a different edge – that edge is that safety and that softness. So I deconstructed his images and then I reconstructed them when I shot them myself. I accentuated some of the perspectives – I shot them all below the women so they were higher than my eye-line, me looking up at them, which creates this link to religion.

Yes. The link to religion was important because religion is the point at which we have been taught to objectify sex – it being the ultimate sin. Sex as something that is out of our control, that we must control, and fundamentally thought of as something to be warned against, only really to be utilised in procreation. So in that kind of way, religion has severed our emotional relationship with sex, being historically we were taught to be ashamed of it and to feel at odds with it. So I put those women high above, elevating them into a position of idolism. And of course his positions are always submissive so I kind of created them to be viewed as unattainable submission, with a religious connotation. 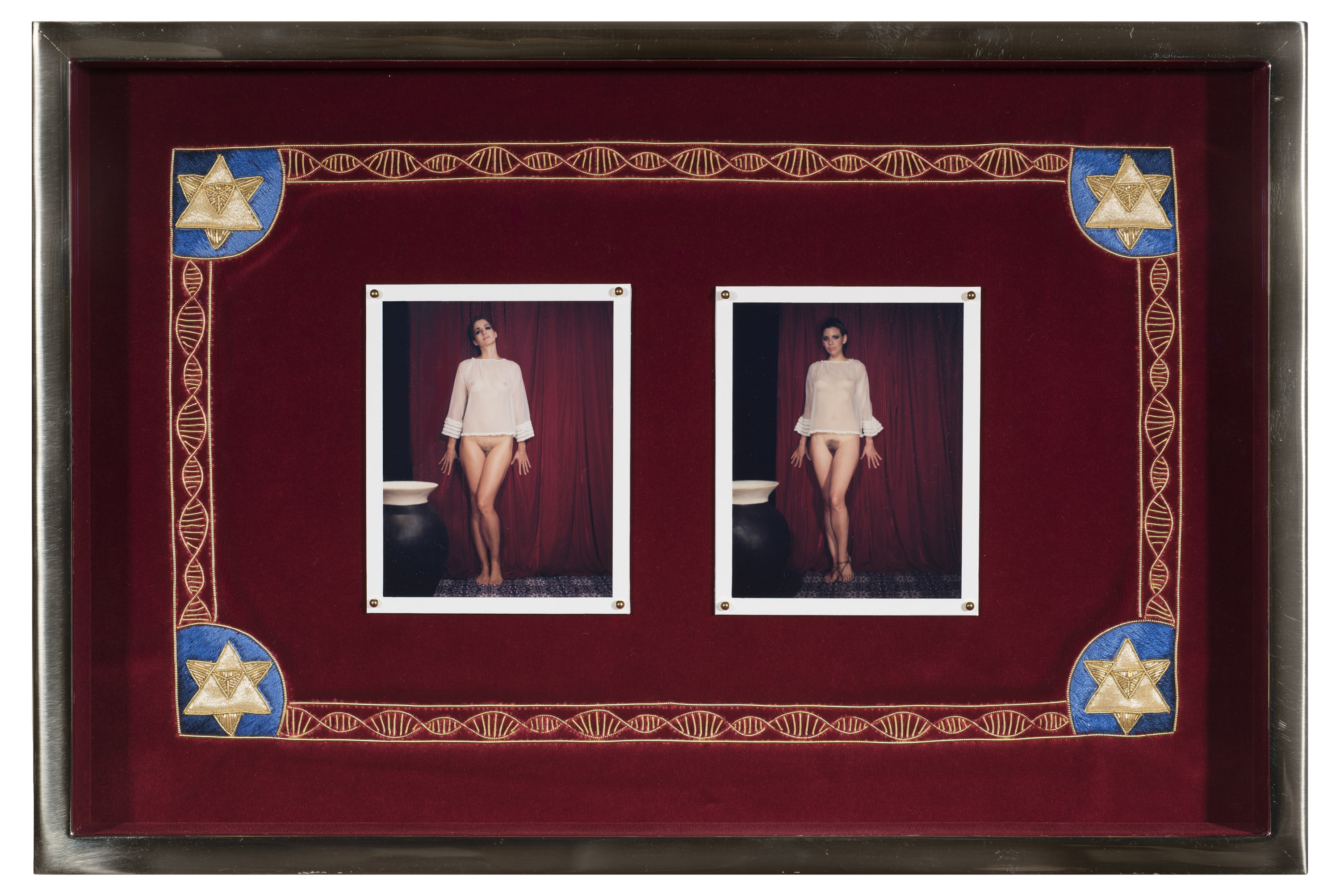 Which also gives back some power to the women that Mollino shot?

Yes. Look, I love Mollino. I don’t hide it and this is a homage. But at the same time these women were prostitutes. I’ve done a lot of research – I’ve met one of them, I’ve interviewed Mollino’s friends, I’ve been to Turin on a number of occasions – and with these women it was definitely transactional. However although they knew they’d be having sex, they didn’t know they’d be photographed. So there’s a subtle consent issue there… They were happy to do it because they were paid for it but at the same time they didn’t feel comfortable about it. So in a way these pieces are taking these women and re-situating them – from a place that was hidden in shame – by putting them in the position of an alter, surrounded by all these ancient symbols which relate to women and sexuality. But at the same time, here is Mollino in total emotional dysfunction. In our society we have noticed that women are very fractured from their bodies and from their sexual power. But we haven’t really acknoledged the male wound within it. And religion has done equal damage severing the relationship men have with their own sexuality and bodies. So these symbols in the work both re-empower the women and adress Mollino’s wound. I don’t want people to judge him with a sense of dismissal because he was a creative genius. But what the women did say is that he was deeply deeply physically ugly, which you can’t tell in the photographs right? He lived with his mum and dad his entire life – he only created the villa to take these photographs in. He was a deeply lonely, hidden character.

Do you think historically we had a different relationship with sex?

Historically we had a much more harmonious relationship with sex, which is what I find interesting. If you look at the symbols I’ve used they all go back into philosophical thinking of ancient societies which acknowledge male and female sexual energy being an energy rather than an act. If you look at Plato, he starts to try to map out the universe in terms of his scientific thinking, you can see there’s a subtext around their thinking around sex which is much more union based.

And you think organised religion has broken that?

We’d be very naïve to think that it didn’t still have an effect on the way we thought because only in the last 100 years that’s its been permissible to not be tied to some kind of religious school of thinking. Religion has informed our social attitudes massively, I think it’s one of the root causes of social sexual shame. And the social really interests me – because how much you can express yourself, and how liberated you can be, depends on your social setting. And how much you will grow – we can only grow a certain degree according to the restrictions of our society. So that’s why social sexual shame is very important and our cultural sexual philosophy holds a trajectory of where we’re headed. And that’s why I’m interested in it. Because on a personal level I see a lot more healthy relationships but on a cultural level I think we’re a lot more unhealthy. Because the way it is represented culturally is light years away from most people’s experiences and that is the problem – we’re being dishonest.

The sexual lie. Which is the starting point for your work?

That’s why I made these pieces. I wanted to take Mollino and look at the archetype of the wounded male who is objectifying sex as something outside of yourself, turning women into these ideals of sexual femininity and beauty, and say that actually this is the way we view sex today. But to say that actually, we haven’t always viewed it like that, it has been viewed completely differently in the past and here are some pointers [via the symbolism] about how people have expressed it where it’s not really a physical act but an occupation of energy inside of you.

Hidden Within, at the Michael Hoppen Gallery until May 1st. 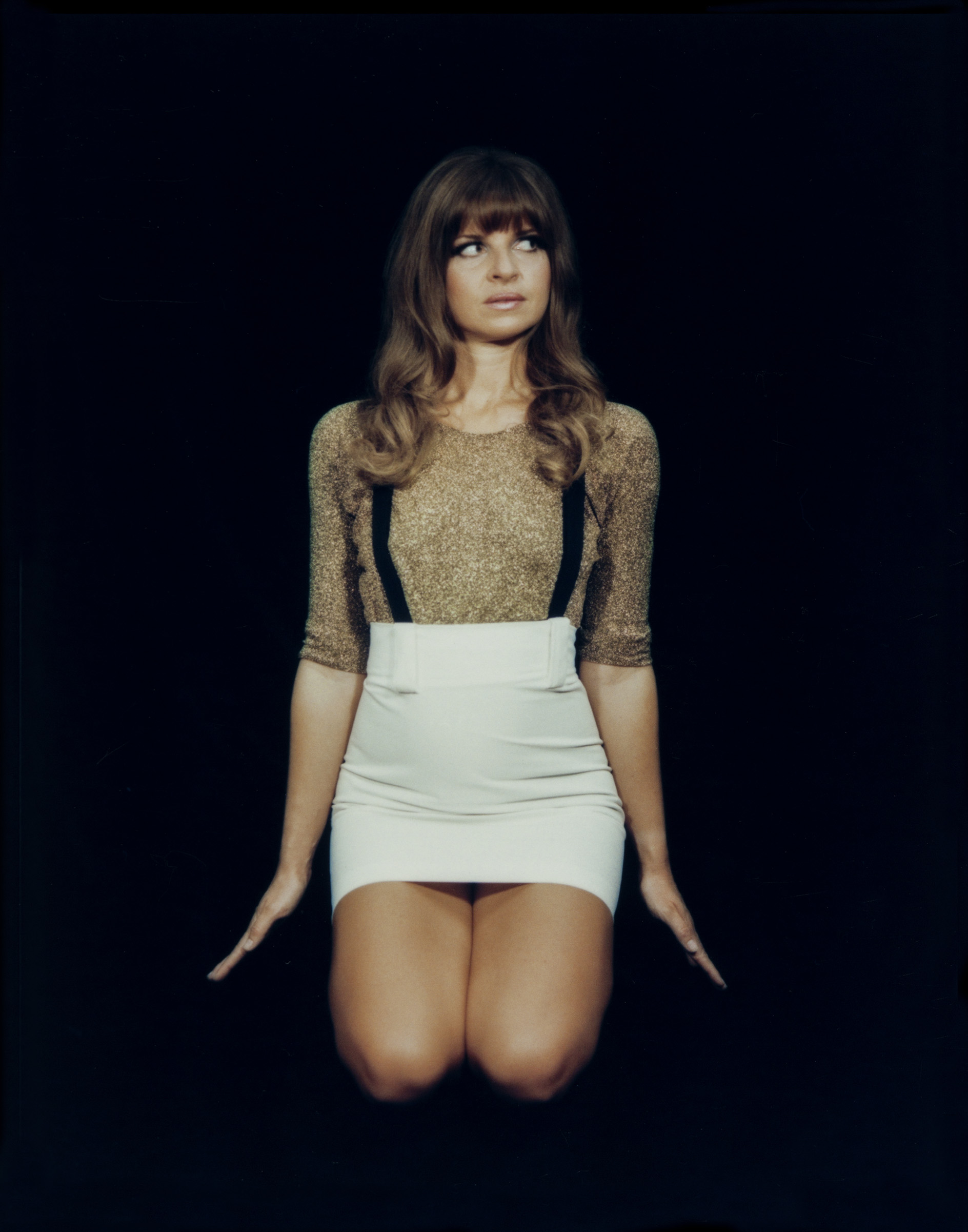