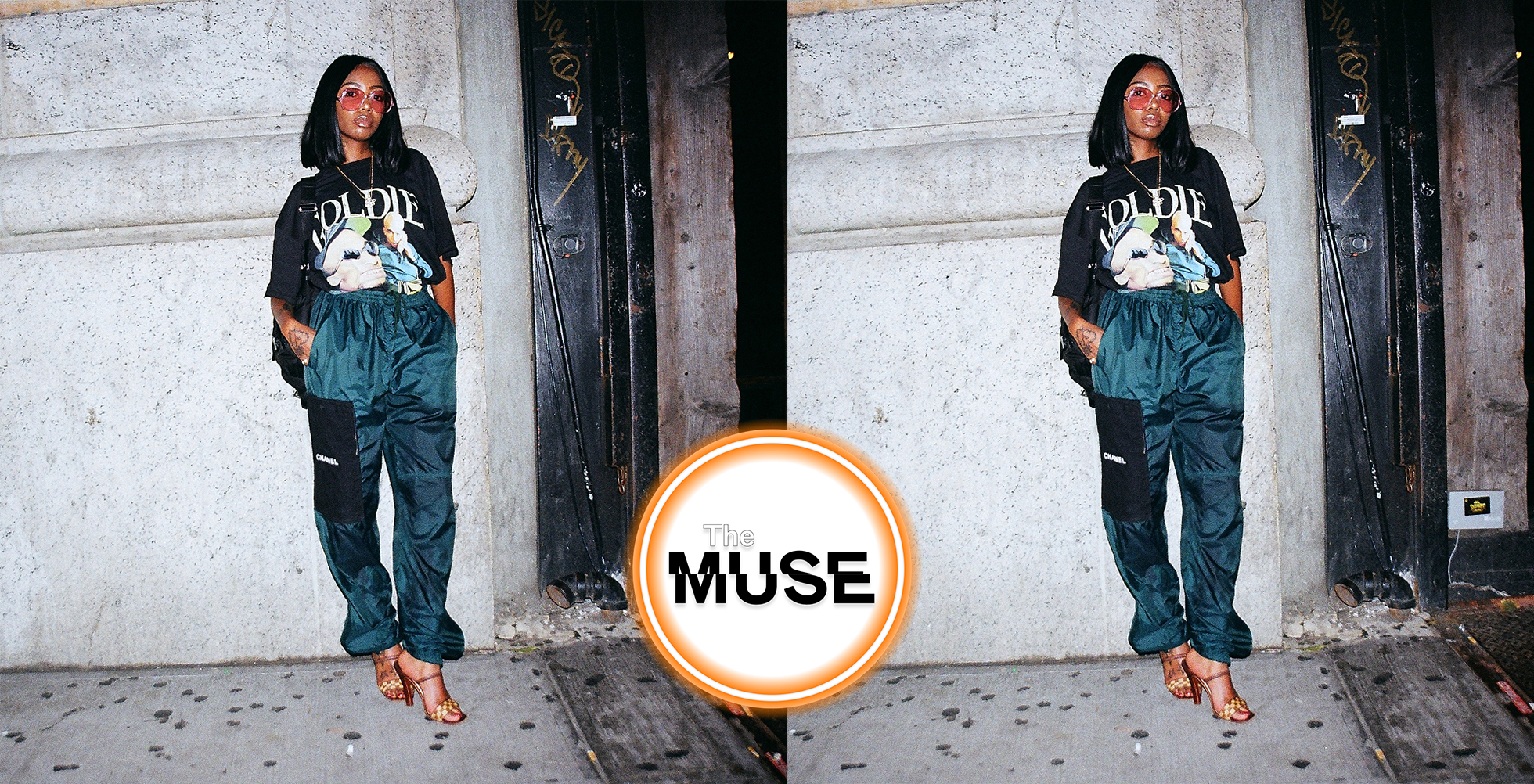 [I]ntroducing ‘The Muse’: Hunger’s new weekly interview series spotlighting the emerging cool alt-girls to follow on Instagram now  – sharing their thoughts on everything from sexism and social media to fashion and politics. Models who are passionate activists? Pop stars opening up about Gen Selfie? Digi-designers empowering women? Meet your next must-follow. Next up, Siobhan Bell…

Siobhan Bell is having her braids done. London’s breakout DJ, MC and music producer deserves a break for sure – just a couple of weeks ago she was jet-setting across the globe entertaining the style set for brands this season including Miu Miu, Balmain and Fenty x Puma (“I play a lot more R&B at fashion parties, it’s a bit more familiar, but they do love a Trap song or a Playboi Carti track,” she says on the phone). Hunger caught up with fashion’s favourite record spinner to talk street style, starting her own night in East London and having Skepta on speed dial… 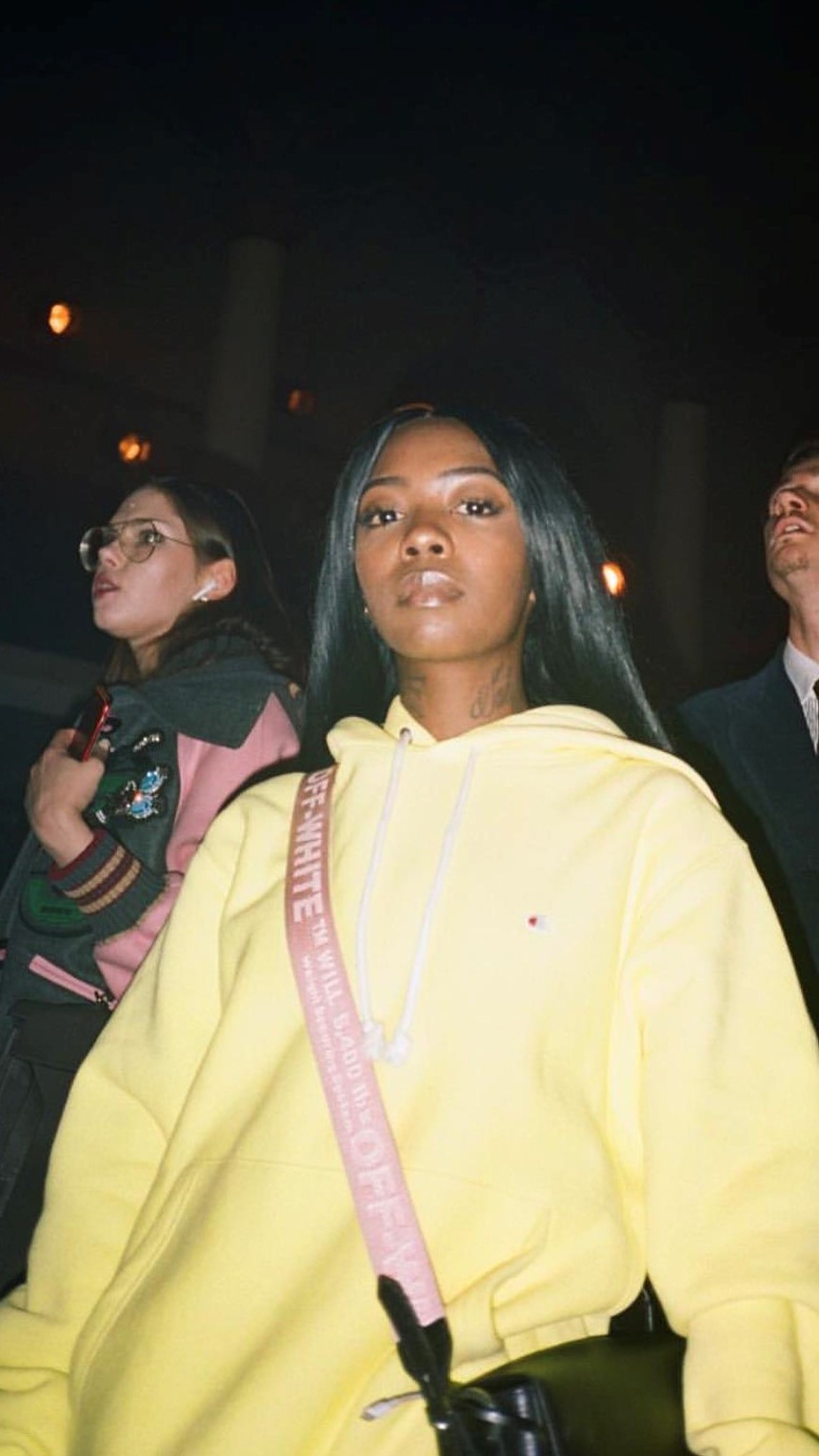 "Females have to make their all-girl line-ups and award shows. Why does it need to be like that?"

Hi Siobhan, you’ve had a crazy year so far – DJing for events for the likes of Gucci Mane to Miu Miu – but you actually started out in music PR…

I was interning at Atlantic, assisting the A&R’s there, and that’s where I met people like Charli XCX. I started DJing on the side at places like Work It, which was an East London night with my friends. It was for fun really and for extra money I’d DJ at Nike Town for six hours on a Sunday. I could never do that now! I think I was there for a year and then people started to book me and ‘cause I was doing it for so long it was good practice. A lot of my friends are DJs and producing and I was getting booked for stuff but I was still trying really hard to get booked on line-ups because people then didn’t really take me seriously. So I made my own night called Cherryade, in 2012. It was literally ‘cause no one would book me and I was like ‘cool, I’ll start my own night. I’ve got enough friends!’

What music genres are you most drawn to?

When I first started, I kind of started on like R&B and ‘90s euro dance, ‘cause it was my favourite stuff to play. I went to New York in 2010, and they were playing a lot of old school hip hop and R&B so that’s what I was kind of DJing with. They hadn’t really opened up to UK music, but they had a little Jungle scene. The first time I went to Harlem, and I met this guy called Dice and he was throwing the coolest parties back them called ‘Bible Studies’. It wasn’t in a church – I don’t think it would be allowed! I mean I grew up in the ‘90s and I was playing pop as well, like Spice Girls. That was the whole point of my party Cherryade, and it was a fun name and any genre you like to dance to.

"It was bizarre because Ian was staying with me and I came home one day and Skepta was just sitting in my house." 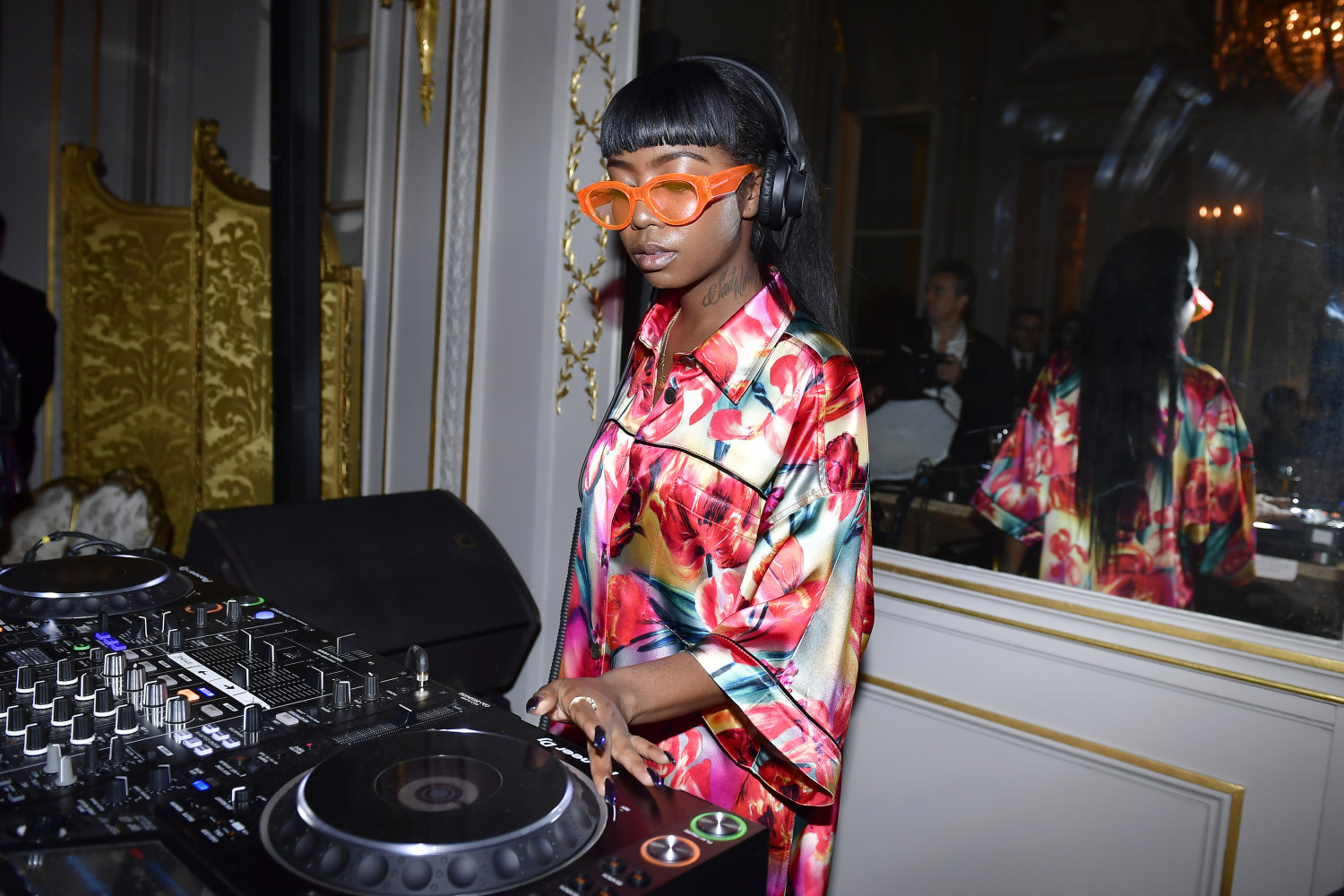 There’s this ‘all boys club’ perception of the DJing world. Do you think there’s a rise of female DJs now?

Yeah definitely! It was so hard to get on line-ups [when I was starting out] because it was all boys and you know, there weren’t a lot of girls. I knew my friends who DJ’d, but it wasn’t really a ‘thing’ or highlighted. There are a lot more female DJs now, but I just really feel if I do line-ups I’m still the only girl. Even the other day I had a go at this awards [ceremony] ‘cause they had a ‘Best DJ’ category and there was not one girl on there. Not to say they need to have they categories mixed but there are a lot of talented females that could be included. Females have to make their all-girl line-ups and award shows. Why does it need to be like that?

What are you currently listening to on repeat RN?

I was in Paris recently and they have their own genre of French rap which is cool. When I DJ it’s more for the crowd, so I wouldn’t play RAY BLK in front of a bunch of teenagers, but I love RAY BLK’s songs. And also I really love Stefflon Don, not even just her music but also her attitude and what she puts in. 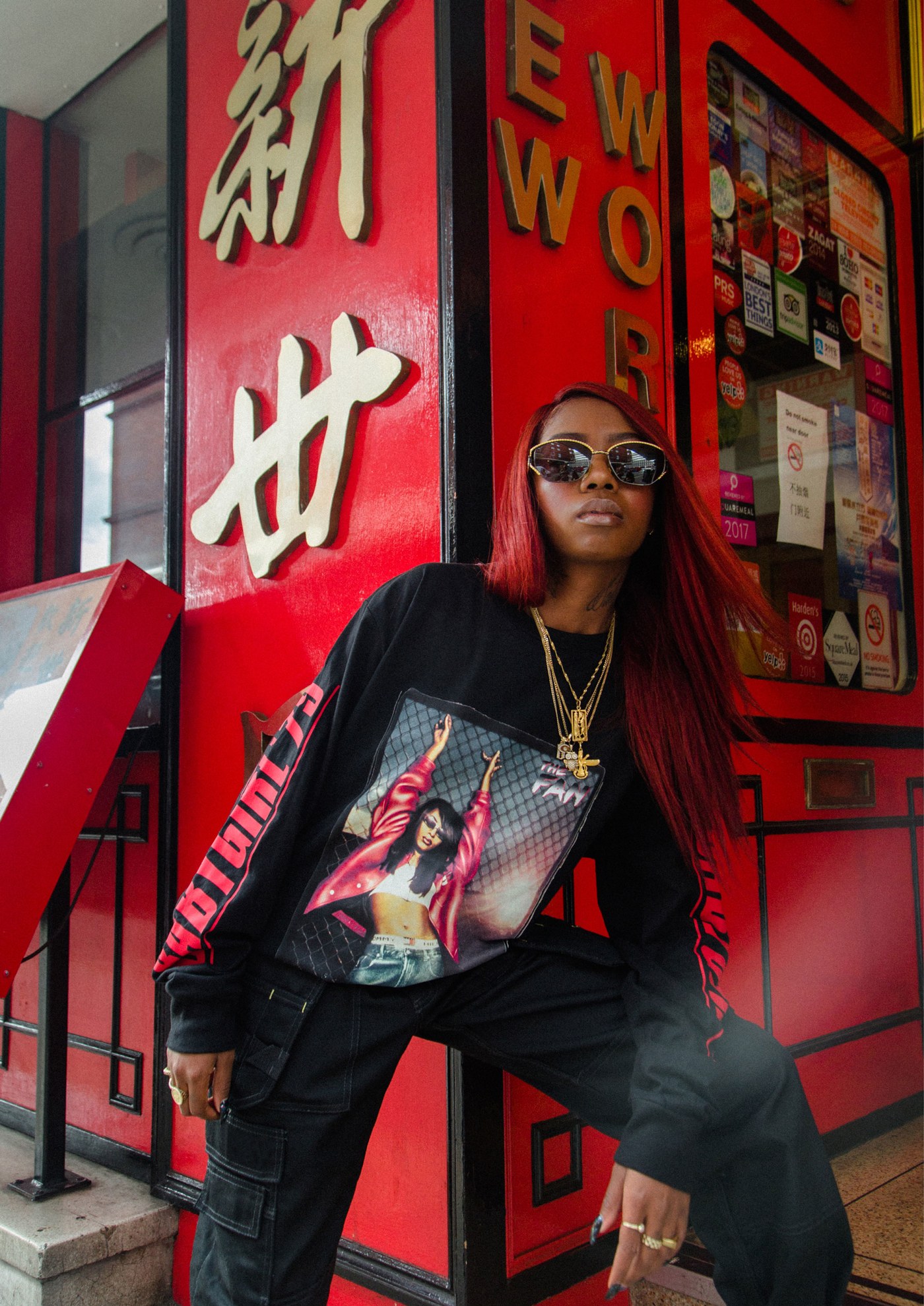 You’re good friends with Skepta. The best advice he’s given you?

The most important thing about him is patience – it’s taken him 10-15 years to get where he is now. On the surface people haven’t seen his changes and what he’s gone through before. There’s nothing wrong with [spending the time] to figure out who you are. I met him through a mutual friend Ian Connor a few years ago. It was bizarre because Ian was staying with me and I came home one day and he was just sitting in my house in London. It’s been really organic not like ‘can I hang out with you?’ You almost forget who he is because he’s so normal and humble.

You’re streetwear-infused style is prolific on Instagram too – what’s your favourite outfit to DJ in?

A comfy trainer is always a go-to. I recently got those Off-White x Nike Air Prestos. They’re like slippers. I wore a Balmain dress for their party too – I wore the corset dress that Kim K wore. I just felt really glam! People message me a lot asking if I’m a stylist, it’s funny. I just love clothes and dressing myself. I love just wearing oversized clothes but I like mixing it up – like pairing a tracksuit with some heels. My friend Ryan Hawaii does really cool stuff, he’s from a group called Neverland, and hand-paints jackets and creates cool tie-dye t-shirts. And also I really like this new sportswear label called The Fan Of which I was the face of, by this designer Elle Azhdari, who has done a collection inspired by Aaliyah; their hoodies are great! 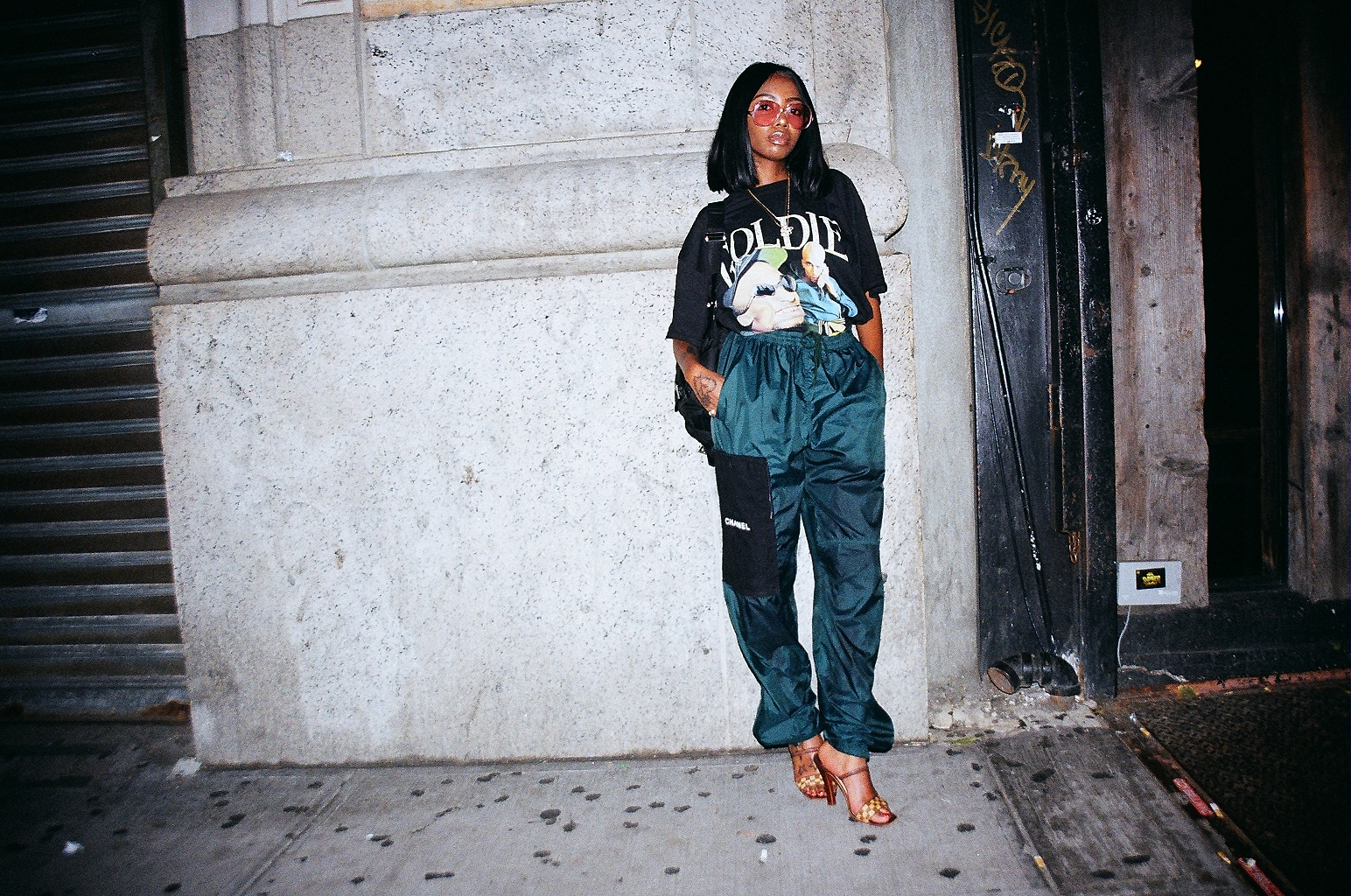