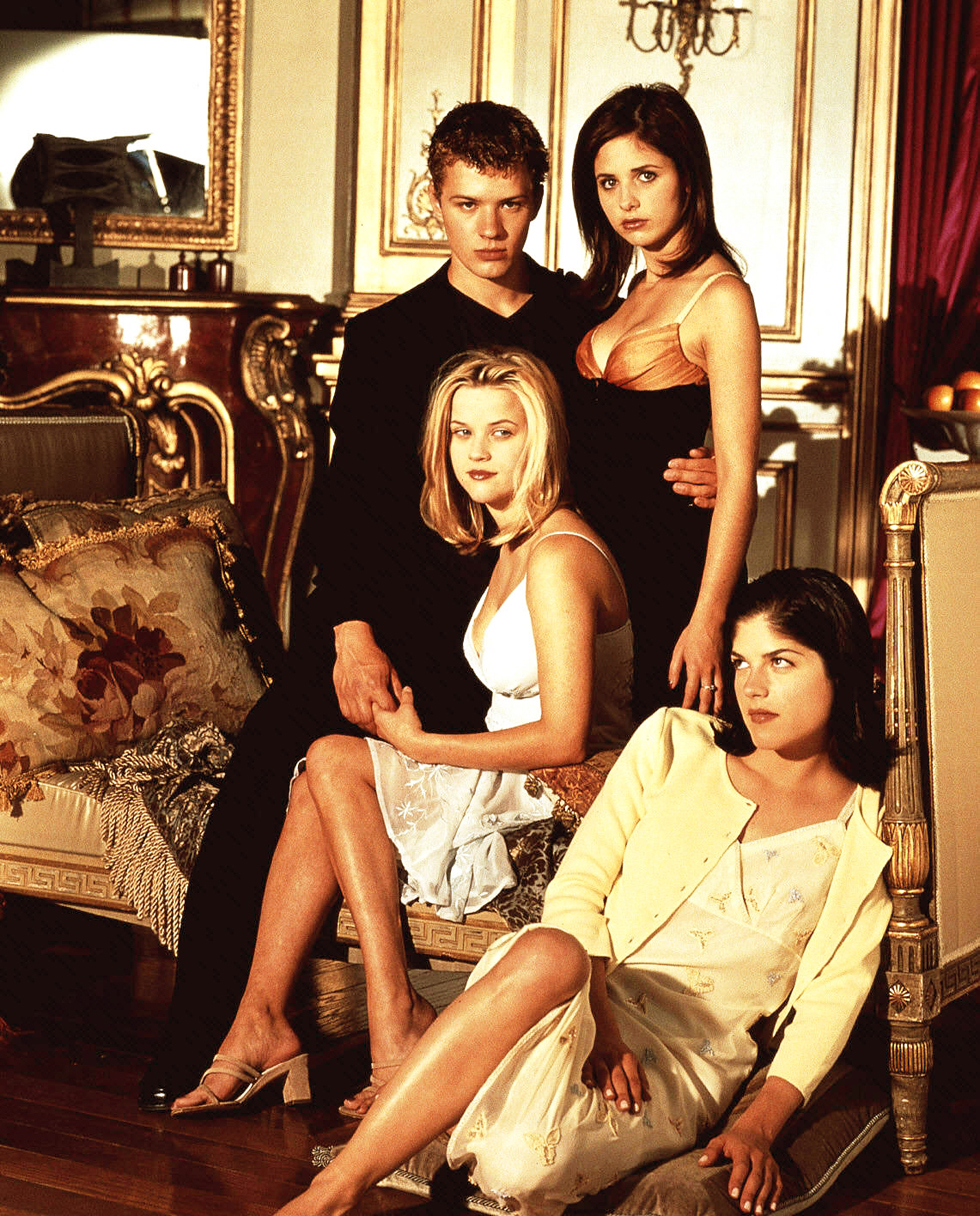 [I]t’s only taken 20 years of dreaming about it, but every 90s girls fashion fantasy has come true this week. London tech company Metail has made Cher’s computerized Clueless wardrobe an online reality.  Their ‘Share Your Cher’ feature allows users to enter their vital statistics to create a 3D virtual model and try Cher’s iconic 90s wardrobe on for size. In the wake of this 90s teen movie fashion we got all nostalgic and decided to take a look at our top ten 90s teen film iconic outfits for your viewing pleasure.

American black comedy Jawbreaker might have been a financial and critical failure, but it certainly did one thing so right: its 90s fashion. Set at Reagan High School the film traces the drama of the popular girl trio after they accidentally kill their prom queen with a Jawbreaker. Courtney Shayne (Rose McGowan) is ringleader of the clique and her single coloured co-ords were the most desirable of them all. Most notable was the head-to-toe purple ensemble consisting of a cropped ribbed cardigan, satin capri-pants and a chiffon choker. As Courtney would say of the look: “Learn it. Live it. Love it.”

This 90s take on Shakespeare’s Taming Of The Shrew plot quickly became a cult classic and we’ve yet to watch it through without near sobs as Katarina (Julia Stiles) reads her unique take on a love poem to bad boy Patrick (Heath Ledger). It’s her effortless 90s grunge style that makes her iconic fashion sense one to remember – with her blue camo tank-tops and wide legged trousers so perfectly in contrast to her preppy and popular sister Bianca’s (Laris Oleynik) get up. After this film, we all wanted to be grunge-alternative.

Cruel Intentions was the 90s classic which oozed sex and luxurious upper class boredom. No character’s wardrobe before or since Kathryn’s (Sarah Michelle Gellar) has managed to fuse refinement with such overt sexuality. A society girl with a not-so-secret coke habit, Kathryn owned the Upper East Side and all those who resided there. She also owned our fashion hearts in her mix of classic corsets, chiffon blouses and slinky blazers. Her most iconic outfit has to be the all black power blazer, oversized sunglasses and wide brimmed hat worn in the midst of New York summertime in Central Park. No wonder the innocent Cecile (Selma Blair) was drawn in for that infamous girl on girl kiss.

Talking of kissing brings us nicely on to this delightfully awkward rom-com about undercover journalist who has never been kissed: Josie Gellar (Drew Barrymore). On her first day in high school girl disguise, Josie goes all out for the occasion dressing up – all in white – with the most ridiculous (and yet – fabulous!) feather boa trim situation we have ever seen. Topping this off with a fruity print tote bag and insane bouffant hair – this has got to be one of the most iconic outfits of the 90s teen movie decade.

No one does goth-chic quite like the rebellious teenage witch Nancy Downs (Fairuza Balk). Her style is riot grrrl meets sorcerer – with all black ensembles, extravagant rosary beads, mesh and leather. The supernatural high school film taught us about using girl power for good, celebrating your uniqueness and most importantly: how to customise your boring catholic school uniform. The 90s school girl classics are all there with short plaid skirts and knee highs but Nancy gives them her sorcery style edge with a pvc leather jacket and witchy lace up heeled boots.

The classic school geek turns prom queen plot line was a 90s mainstay, and this hilarious and touching film tracked the transformation of Laney Boggs (Rachel Leigh Cook) from miserable school loser artist to school jock Zack Siler’s (Freddie Prince Jr.) prom date. Whilst the strappy red dress ‘ugly duckling to swan’ moment might be the film’s most famous look – it’s her patterned shirt and baggy dungarees worn with wide rimmed glasses and a loose ponytail that get us every time.

Whilst Cher’s (Alicia Silverstone) incredible wardrobe containing everything from Alaia to Calvin Klein that had teen girls screaming out with jealousy, it was best friend Dionne’s hat collection that truly created the film’s most iconic fashion moments. Seen here teamed with a classic clueless plaid skirt and jacket suit, this plastic red-rose masterpiece is the stamp of true 90s fashion prowess.

In preparation for their 10-year high school reunion Romy (Miro Sorvina) and Michele (Lisa Kudrow) hit up the local gym to get in shape. The blonde duo don’t don boring work out gear however, opting instead for brightly coloured mini skirts, little crop tops and platform shoes. Standing out like the true characters they are in a sea of gym wear boredom, the two show that appropriate dressing for any occasion never brings as much fun.

Drew Barrymore’s classically 90s outfit in the infamous American slasher film’s is possibly the most copied 90s teen character outfit of the decade for fancy dress parties. Since the film’s release girls across the globe have been donning blonde bob wigs, cream knitted jumpers and blue jeans – splattered with blood of course – for day of the dead celebrations. Carrying a cordless phone takes this dress up to the next level of realism, whereas fake blood free the look has an effortlessly chic and simple vibe for everyday wear.

Empire Records is a day in the life of this rag tag group of teens who work at an independent record store as they deal with a series of personal crises and the potential corporate engulfment of their privately owned vinyl mecca. Corey Mason (Liv Tyler) takes the best of 90s fashion – from Clueless to Nirvana, to create a look of immeasurably sassiness. With her fluffy powder blue cropped sweater, plaid pleated mini skirt and black ‘stomping’ boots – she’s the indie character from the 90s that everyone in the empire records know is still unendingly in love with.