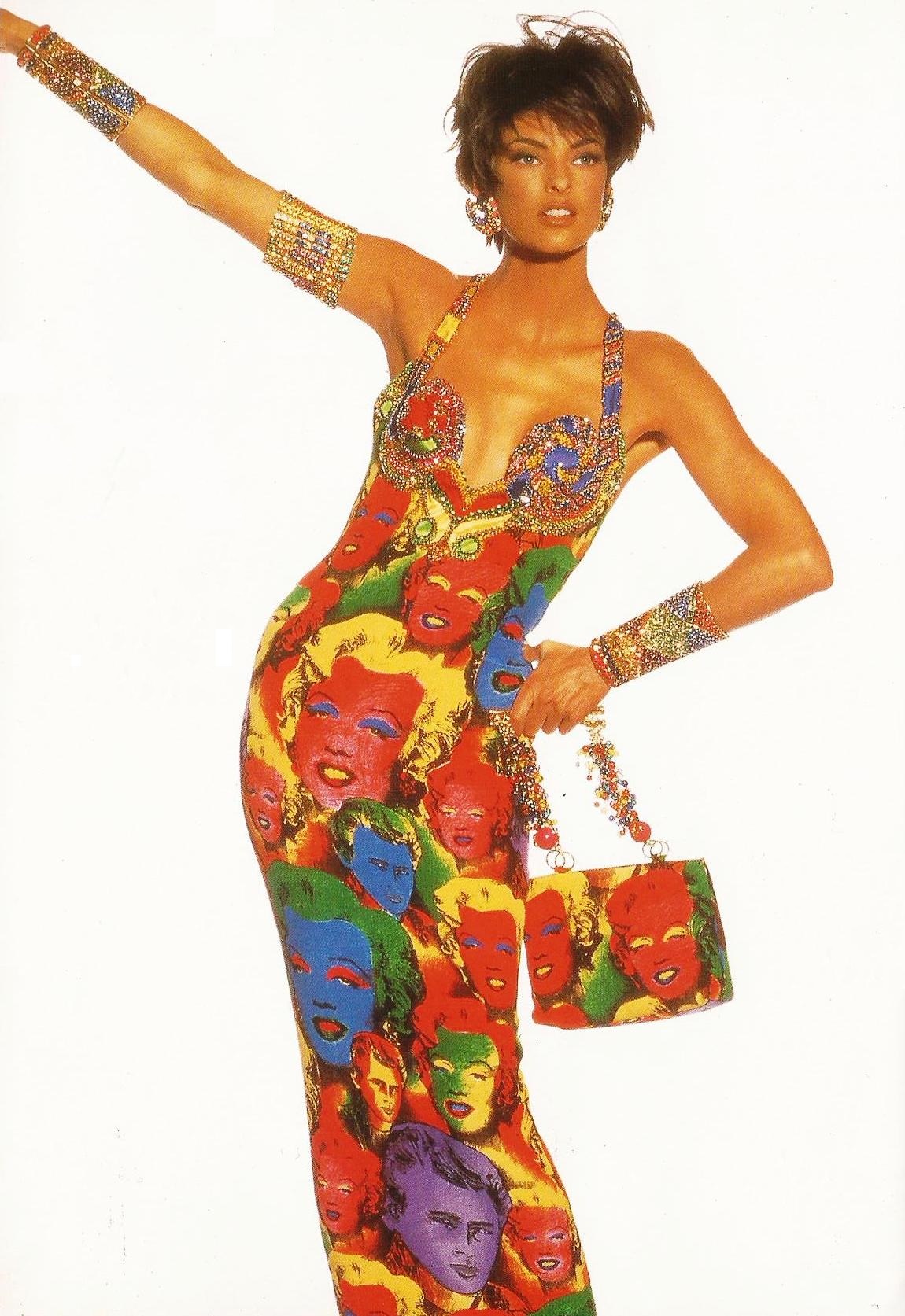 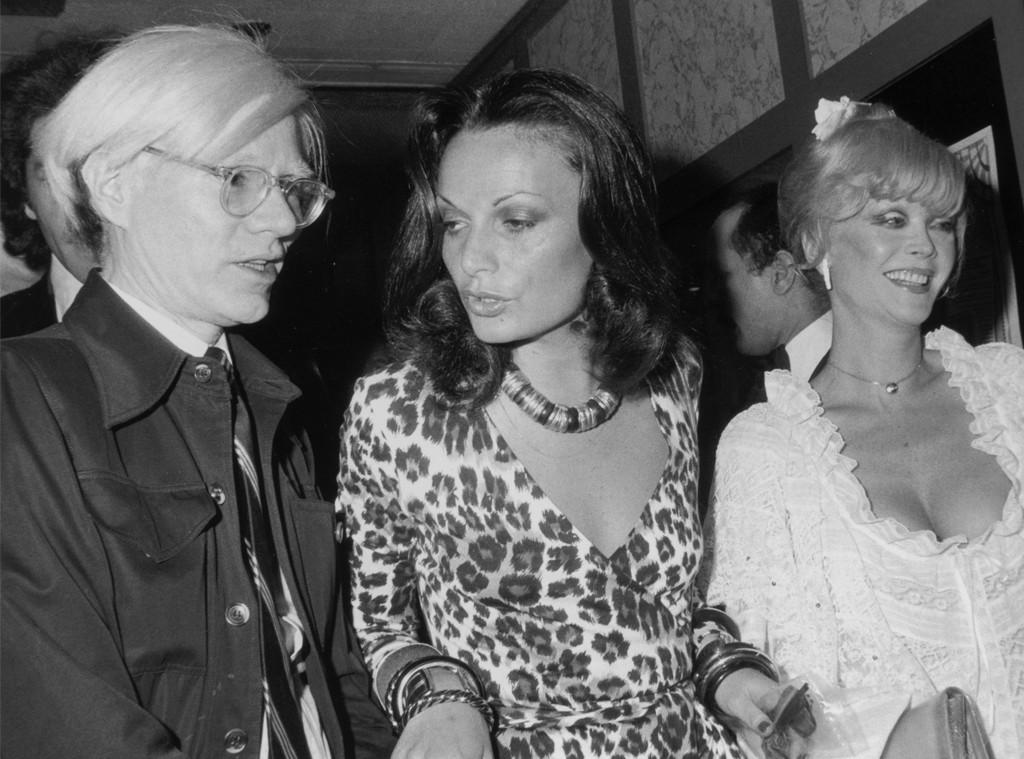 [A]ndy Warhol’s lasting impression on the fashion industry is indisputable. Back in the 50s, the young artist started out as an illustrator for Harper’s Bazaar, drawing whimsical illustrations of delicate heels and colourful beauty products. Reportedly fashion editor at the time, Diana Vreeland, and her Harper’s colleagues would refer to him as “Andy Paperbag” as the socially awkward artist would bring his illustrations to work in a paper bag.

It wasn’t until the late 60s, once he’d exploded onto the art scene with his Campbell’s Soup cans, that Warhol decided to launch the magazine that would become what Diana Vreeland’s biographer Amanda Mackenzie Stuart described as “the vehicle for drawing the young, the famous, the rich, and the interesting into Warhol’s orbit.” The biggest designers of the time such as Halston, Karl Lagerfeld and Yves Saint Laurent would regularly feature in Interview alongside images of the world’s most glamorous women like Jerry Hall, Diane von Furstenberg and Bianca Jagger.

Interview became one of the most influential publications with each issue capturing the zeitgeist and elevating the cult of the celebrity. Andy Warhol died in 1987, but the magazine he founded still thrives and his legacy lives on, particularly through art works and fashion inspired by his vision and masterpieces. Here we look at some of the collections that have been heavily influenced by the Pop Art pioneer.

Made in 1962 and exhibited at his first solo show as a fine artist, Warhol’s instantly recognisable artwork consists of 32 painted canvases of Campbell’s soup cans. The work’s mundane subject matter and focus on consumerism initially caused a stir but following the global popularity of the series of similarly themed works, Warhol’s status grew to a level where he was not only the most revered American Pop Art maker but also the highest-priced living American artist.

Warhol’s trademark Campbell’s soup can motif has been a repeated source of inspiration for designers and brands, from high street to high fashion. For his Spring/Summer 1984 collection French designer Jean-Charles de Castelbajac presented a soup can shaped dress as seen here on French supermodel Inès de La Fressange. 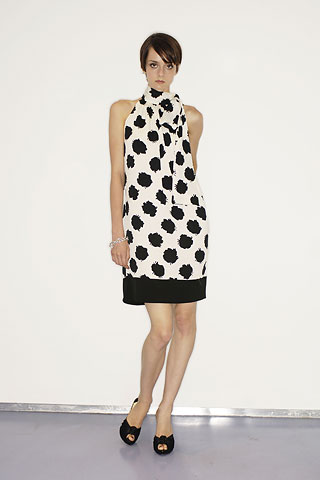 For resort 2008 Diane von Furstenberg collaborated with The Andy Warhol Foundation to design a collection of kaftans and swimwear. “Andy’s pop colours and iconic images feel glamorous and right for the beach,” explained von Furstenberg, who was influenced by her friend during her early career as well as appearing twice on the cover of his magazine Interview. “Andy and I were contemporaries, so it feels right,” the designer said of her collection which featured the artist’s bold and colourful prints. 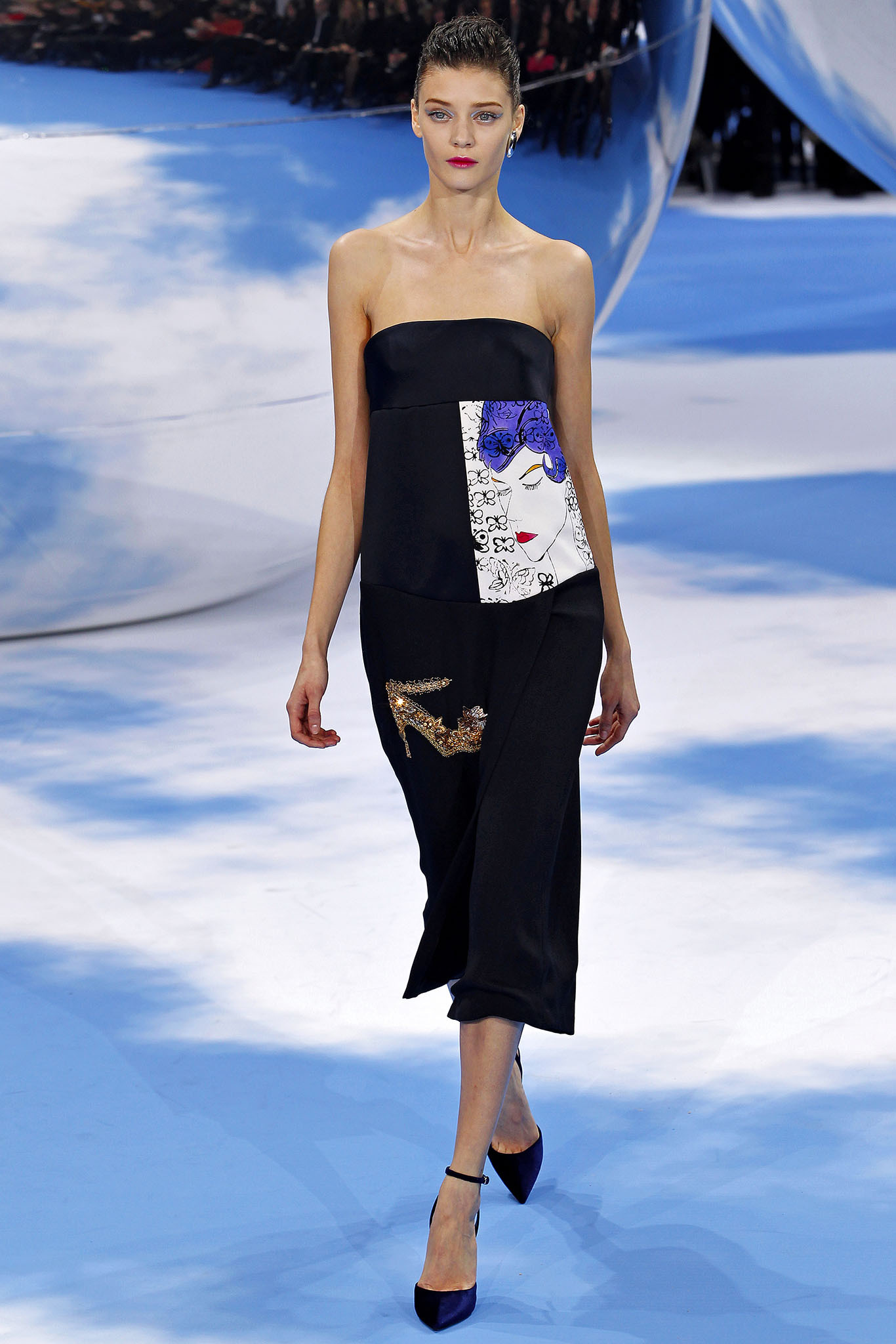 For his second collection for the French fashion house, Raf Simons added lesser-known Warhol touches to the Dior Autumn/Winter 2013 ready-to-wear collection. Bags and silk dresses were embroidered or embossed with rare shoe drawings by Warhol from the 1950s whilst silk dresses featured the artist’s early drawings as a recurring graphic. 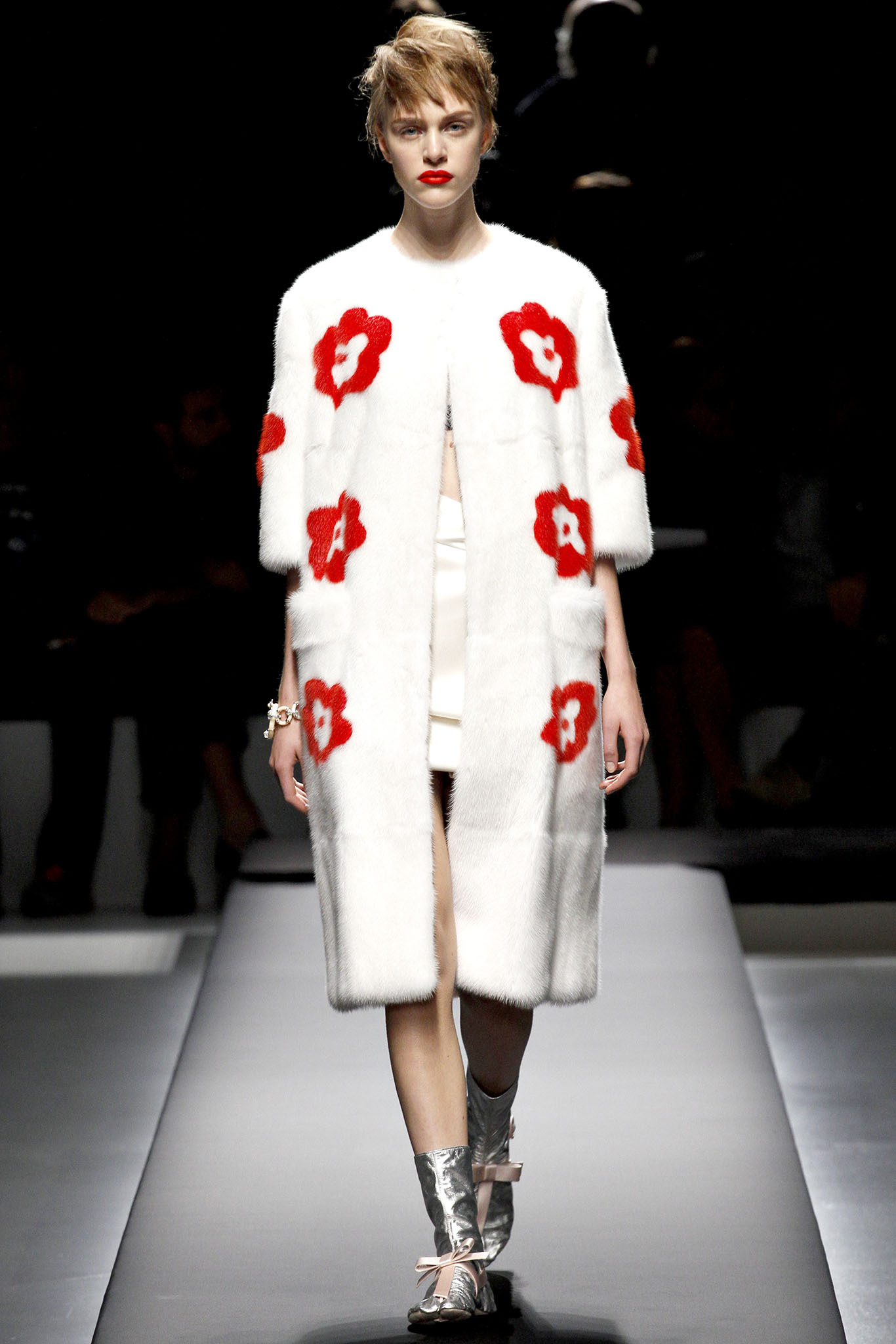 Warhol began work on Flowers in the summer of 1964, focusing his first show with Leo Castelli on the floral series in the autumn of that year. For this exhibition he worked on square canvases and for the first time, his works had no set vertical, allowing the Flowers to be displayed in a multitude of ways. Miuccia Prada’s SS13 Prada collection was inspired by Warhol’s Flowers and a standout white fur coat was inset with the artists’s daisies in red.

Gianni Versace’s SS91 Pop Art collection featured a jewel-encrusted dress emblazoned with Warhol’s Marilyn Monroe prints, worn by supermodel Linda Evangelista. Both glamourous and sexy, the dress defined 90s fashion and as one of Versace’s most celebrated creations is now owned by the Metropolitan Museum of Art in New York. 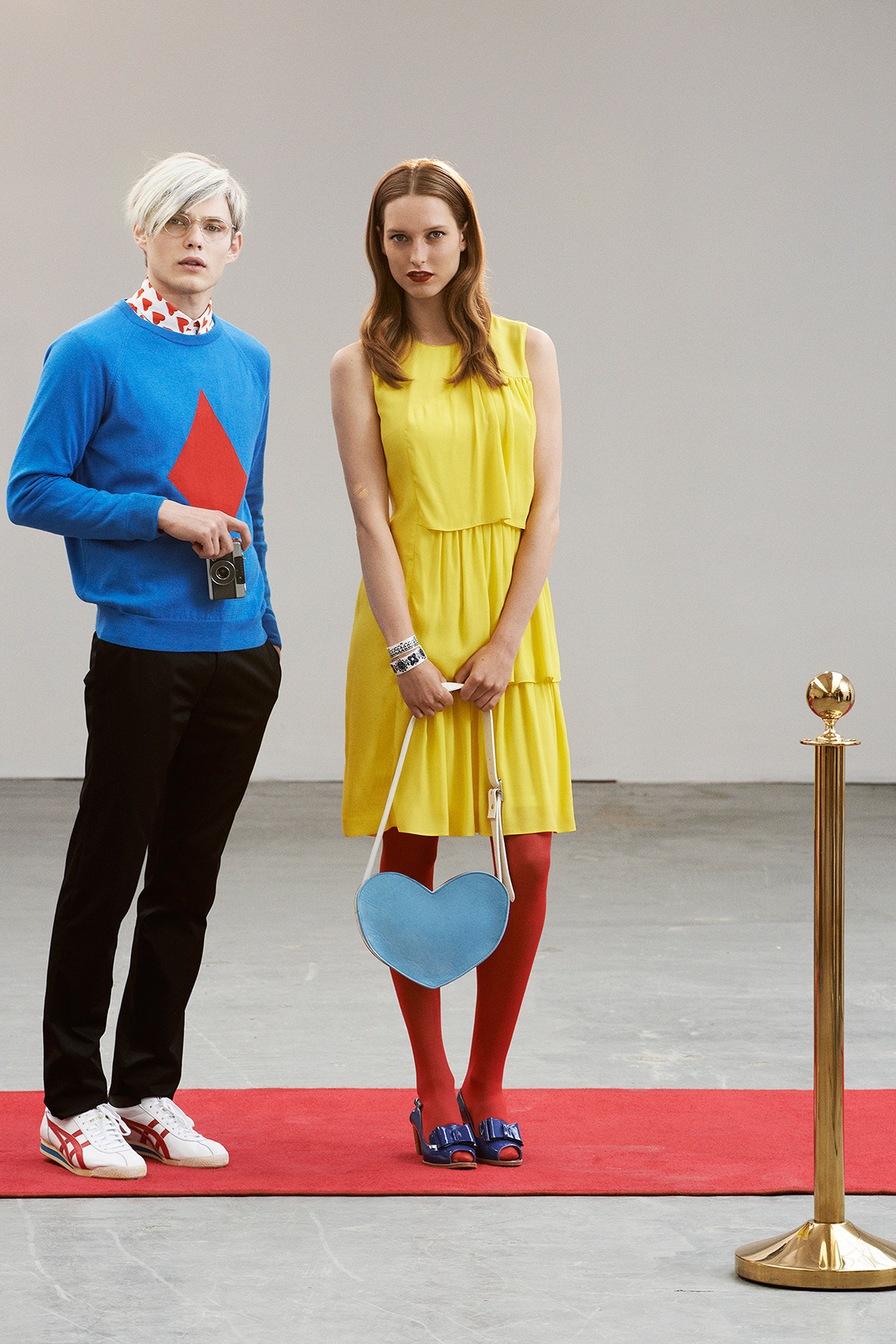 Warhol’s own sartorial style inspired Peter Jensen for his new men’s collection which consisted of peacoats, jeans, corduroys and blazers. The womenswear collection drew influence from the wardrobe of actress Paulette Goddard. Celebrity-obsessed Andy Warhol adored Goddard and her jewels, following her around New York right up until his death in 1987. 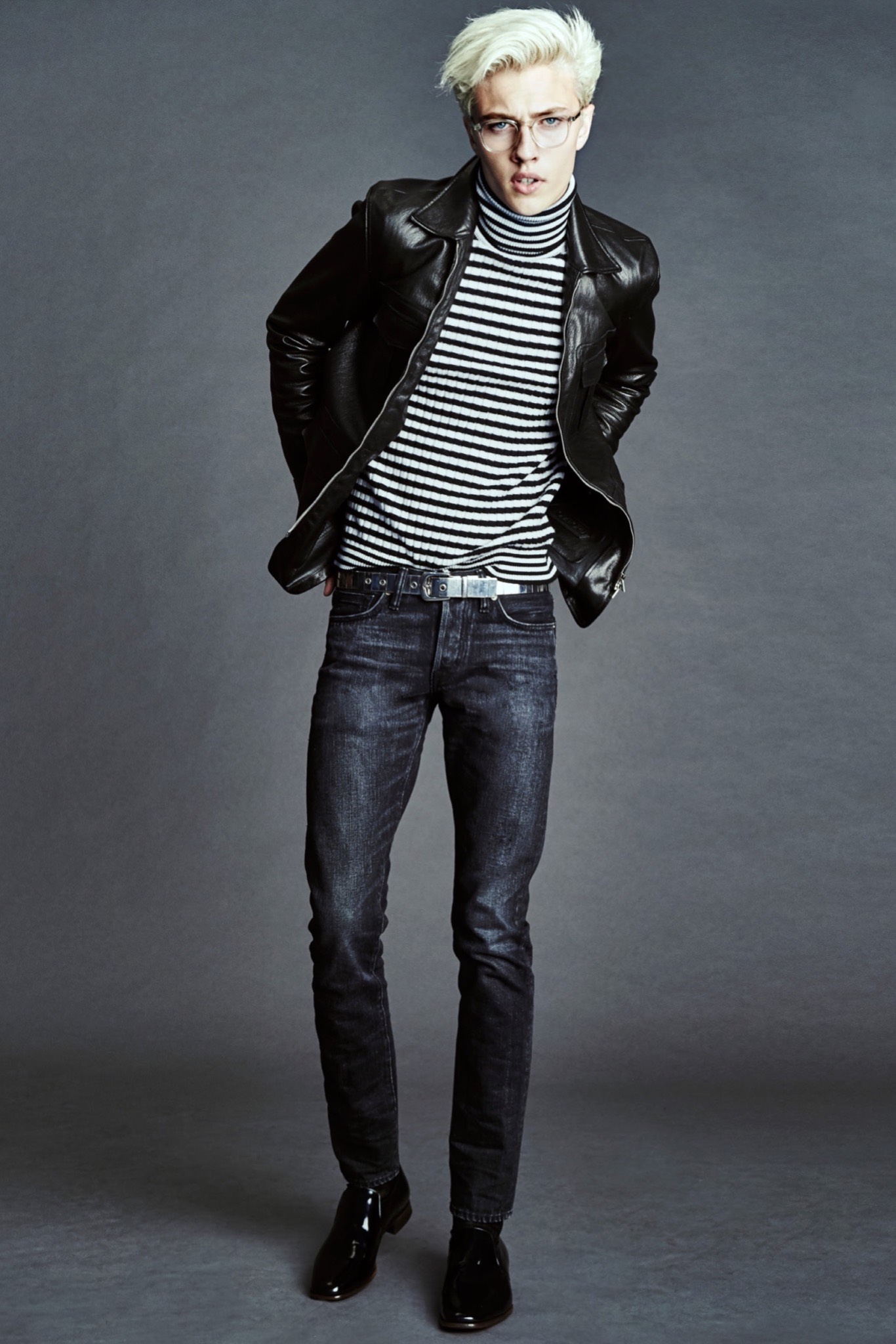 Though Tom Ford’s most recent menswear collection drew to mind an image of David Bailey’s mid-60s monochrome London, there was an underlying element of Andy Warhol’s Factory and a Velvet Underground aesthetic. Ford also built on the pop art influences in his last tailored offerings, with even more vivid and colourful printed suits this season. 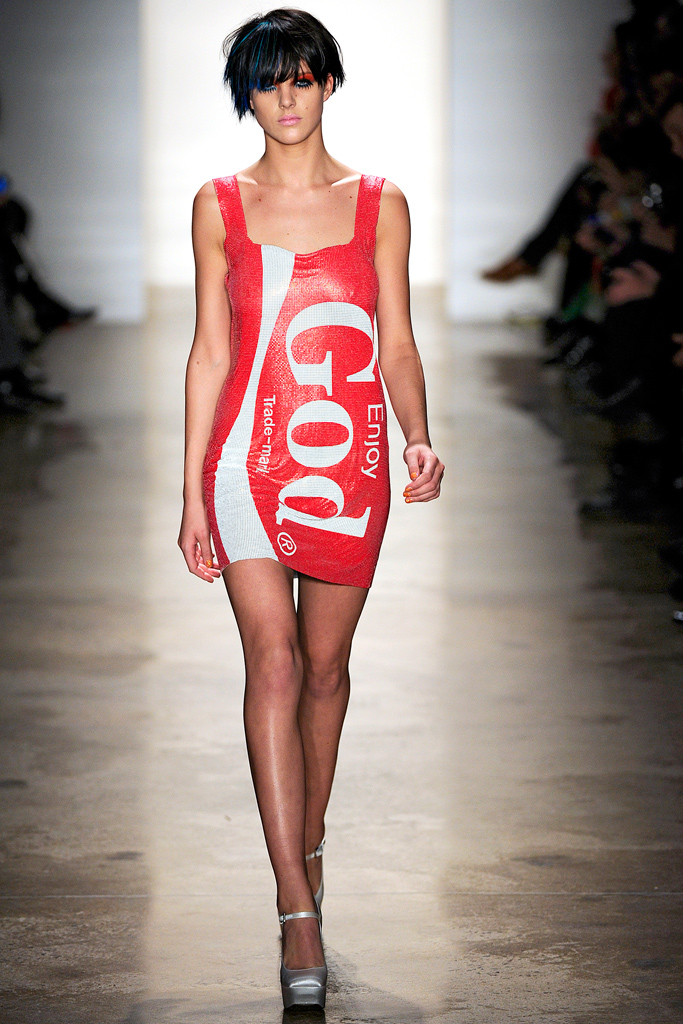 It is evident from Jeremy Scott’s collections for both his eponymous label and Moschino that he believes wholeheartedly that “you should have fun with fashion.” Playing with the idea of logos and brand worship as well as his obsession with celebrity and pop culture, Scott is the modern day Andy Warhol. For AW09 the designer manipulated the ubiquitous Coca-Cola logo fusing it with religious wording, making a tongue-in-cheek comment on commercialism and the reverence of the mundane that Warhol would have been proud of. 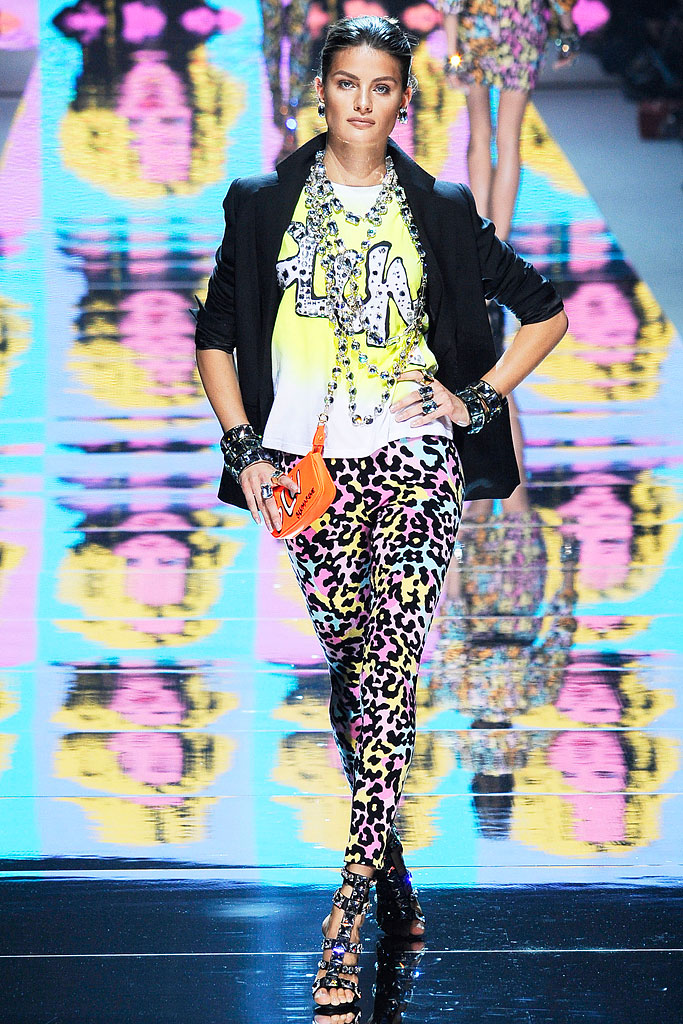 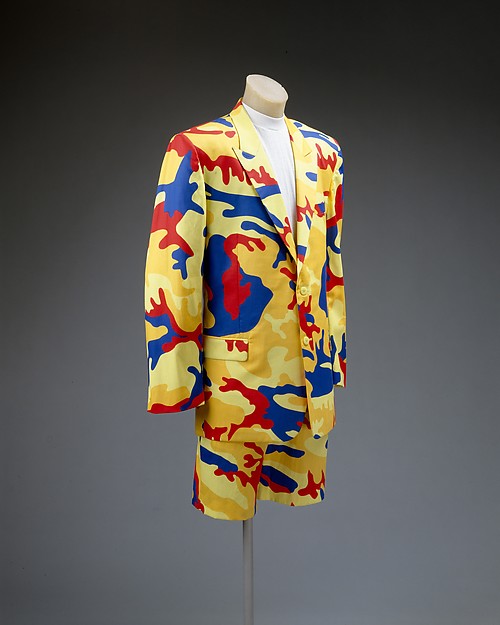 Fashion designer and artist Stephen Sprouse took graffiti art from the streets and transformed it into fashion. In the 80s Sprouse dressed Debbie Harry, establishing a name for himself with his makeover of the Blondie singer before launching his first collection in 1983. In 1988 Sprouse was given permission by the Andy Warhol Foundation to use Warhol’s “Camouflage” screen prints in his collection. Warhol and Sprouse had been great friends and when the artist died a year earlier he was buried wearing a Sprouse suit.