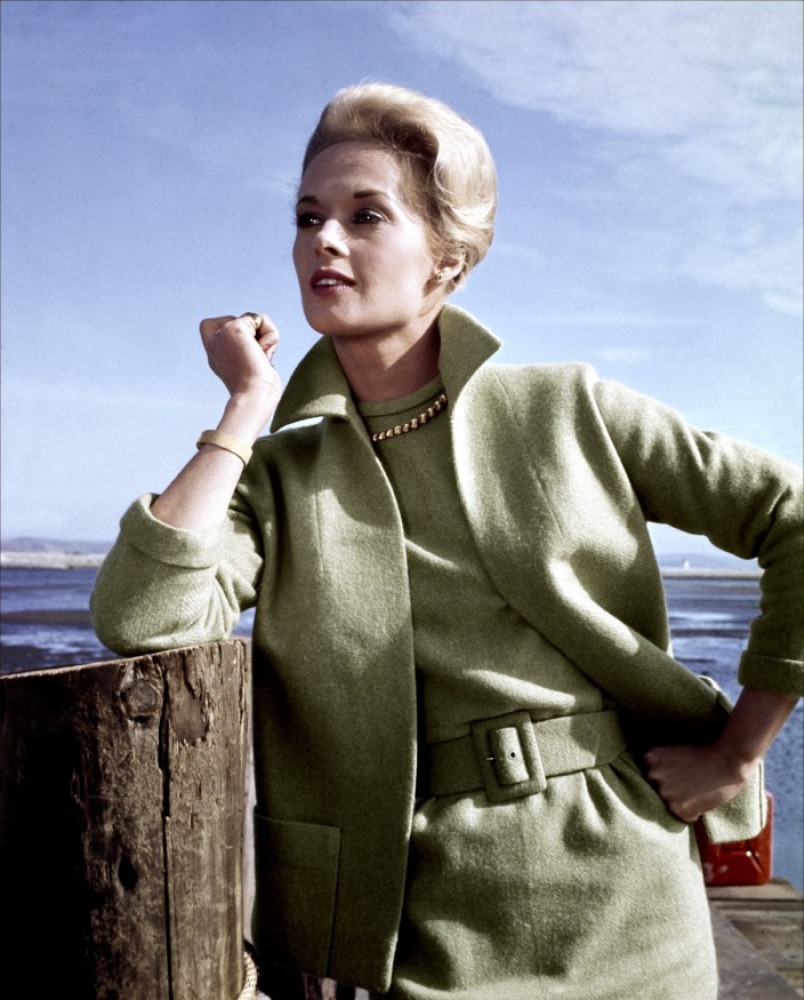 Cary Grant and Eva Marie Saint in North By Northwest, 1959

[F]ilm noir and Hitchcock’s Heroines have had a monumental impact on fashion, influencing countless collections and the way women dress. Costume designer Edith Head worked with Hitchcock on 11 of his films, winning eight Academy Awards for her work outfitting the stars of the silver screen (that’s more gold statuettes than any other woman in Hollywood history). Head and Hitchcock had an almost perfect synergy thanks to their similar taste in clean lines, sharp tailoring, and carefully considered pops of colour. Although feminine dressing became much more apparent and revealing in the mid century, both director and designer agreed that suggestions of sensuality should be subtle and left mostly to the viewer’s imagination.

In honour of Hitchcock’s birthday today, we’ve put together ten of the most memorable looks and best-dressed characters from his films.

For his American film debut, Hitchcock cast Joan Fontaine as the young woman who becomes the second wife of brooding, aristocratic widower Maxim de Winter, played by Laurence Olivier, in the psychological thriller Rebecca. Fontaine was nominated for an Oscar for her role and a central moment in the film is when she descends the grand staircase to the Manderley ball, having been duped by housekeeper Mrs Danvers into wearing a gown that is modelled on one of Rebecca’s.

No costume designer was credited on screen, however, the wardrobe has often been attributed to American fashion designer Irene Lentz. Fontaine’s clothing completes her character, asserting her role as the awkward, mentally-abused, gentle, young woman who must live in Rebecca’s shadow. Wearing plain cardigans and wool skirts, she only has childish gowns to don for supper. Her attempt at dressing more maturely and elegantly for dinner results in Maxim’s mockery.

In Notorious, Ingrid Bergman plays Alicia Huberman, the daughter of a convicted Nazi spy who infiltrates a group of Nazis in Brazil after the Second World War. This was the first film Edith Head worked on with Hitchcock and the beguiling disguises she created for Ingrid Bergman’s secret agent are exquisite. The designer wrote in her memoirs: “Every costume is indicated when he sends me the script. There is always a story reason behind his thinking, an effort to characterise.” From glamourous gowns, to furs and suits, Notorious shows us key 1940s looks on the Swedish beauty Bergman.

Dietrich plays flamboyant stage performer Charlotte Inwood who according to her lover has killed her husband. For this film, costumes were designed by Christian Dior as Marlene reportedly gave the ultimatum: “No Dior, no Dietrich.” Warner negotiated a 25% discount on the cost of the actress’s Dior couture wardrobe for the film and in return Dior insisted on his first Hollywood screen credit. Dietrich kept her Dior wardrobe from the film and contributed to the design with her notable expertise. While Dior sketched during pre-production, Dietrich would be beside him picking luxurious swatches of material.

was Grace Kelly’s first Hitchcock film, in which she plays the wife of Tony Wendince who intends on murdering her for their money. The whole film mainly takes place in the living room and for his Hitchcock’s third film in colour, his striking use of vivid colours ensures that our attention is locked on the one setting. In the first scene we see Kelly in an off-white, pale pink skirt and cardigan, having breakfast with her husband. Soon after we she wears bright red with Mark, her lover, and the contrast of those two scenes with her two partners, is very powerful. The costumes were designed by Edward Carrere and Margot’s wardrobe goes from bold to more muted and sombre as her innocence begins to be doubted.

Widely considered to be the apogee of Hitchcock’s career, Rear Window is one of the most visually delightful films in the director’s oeuvre and Grace Kelly’s costumes are unforgettable. Grace Kelly plays Lisa, the society girlfriend of wheelchair bound L.B. “Jeff” Jefferies who is waiting for his broken leg to mend. In her introductory scene Kelly leans into kiss Jeff and when the camera pulls back, we see Lisa properly for the first time, in a magnificent dress, confirming that she is a very wealthy woman. She describes her dress as “fresh from the Paris plane”, with a fitted black bodice, off the shoulder, deep V neckline, cap sleeves, and a mid-calf New Look full skirt.

Cary Grant and Grace Kelly in To Catch A Thief, 1955

To Catch A Thief is arguably one of the most stylish film of all time with the beautiful costumes again designed by Edith Head and set against the stunning backdrop of the French Riviera. Grace Kelly and Edith Head were close friends and Kelly was also Edith’s muse. However, Grant chose his own outfits as he typically did for his films, later explaining “generally I wore simple, tasteful clothes – the same kind of clothes I wear off screen.”

Cary Grant and Eva Marie Saint in North By Northwest, 1959

The suit worn by Cary Grant’s character Roger O. Thornhill in North By Northwest is one of the most iconic men’s looks in the history of cinema. It was based on the shape of the American sack suit and features a glen check. Grant wore it with a white shirt, a gunmetal grey tie, long grey socks and oxblood shoes, creating a look that is as stylish and elegant now as it was then in the late 50s.

Similarly, Eva Marie Sainther whose wardrobe was bought entirely from the shop floor at Bergdorf Goodman, displays a timeless elegance and the actress explained some time later, “[Hitchcock] didn’t want the picture to date because of the clothes. There’s not one outfit I couldn’t wear today with a few minor adjustments and not look stylish.”

“I don’t wear suits, and I don’t wear grey. Another thing, I don’t wear black pumps,” Kim Novak stressed to Edith Head, the costume designer for Vertigo. However Hitchcock retorted, “I don’t care what she wears as long as it’s a grey suit,” when Edith relaid the conversation to him. Obviously Hitchcock won this fight and Novak did indeed wear a grey suit and black pumps for her iconic look in Vertigo.

Throughout The Birds Hedren wears just three outs, the most recognisable of which is the elegant wool crepe green suit she wears for the majority of the film, designed by Edith Head. It’s based on Head’s own design for Grace Kelly as Lisa Fremont in Rear Window. The green of Hedren’s two-piece mirrors the colour of the lovebirds that are featured in the opening scene of the film and Melanie’s smart attire sets her apart from the residents of Bodega Bay.

Throughout the film Hedren wears 32 outfits which far surpasses that worn by any other Hitchcock heroine. Clothing, hair and makeup play a significant part in the film, conveying shifting identities, gender relations and social status.