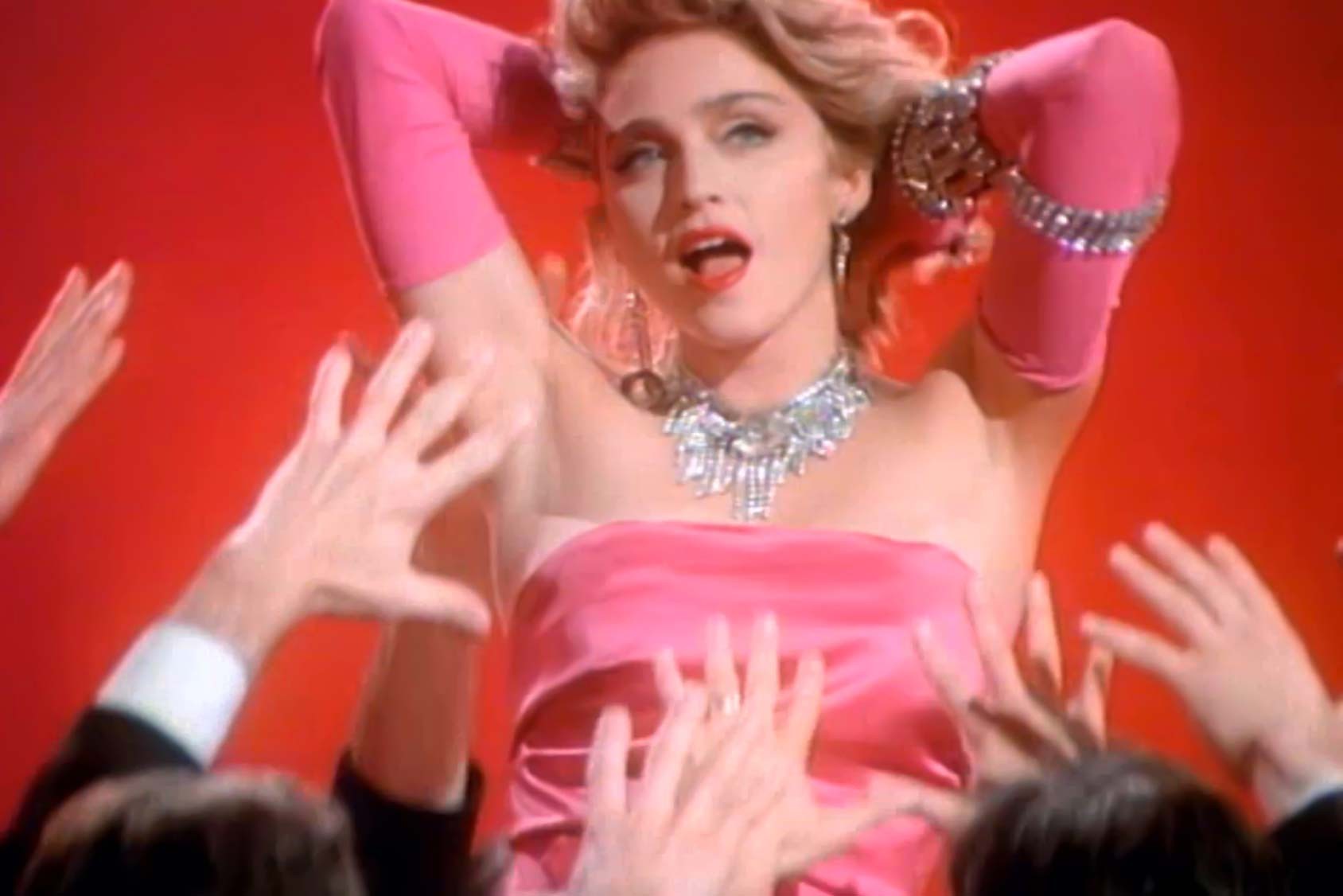 [I]n need of some mid-week motivation? We’ve selected ten of our favourite Madonna music videos, though there were almost too many to pick from a career that has spanned four decades. Get into the groove…

Re-enacting the iconic scene in 1953 film Gentleman Prefer Blondes in which Monroe performs ‘Diamonds Are A Girl’s Best Friend’, Madonna channels Marilyn for this video. In a 1987 interview with New York Daily News, Madonna said: “When it came time to do the video for the song, I said, I can just redo that whole scene and it will be perfect. Marilyn was made into something not human in a way, and I can relate to that. Her sexuality was something everyone was obsessed with and that I can relate to. And there were certain things about her vulnerability that I’m curious about and attracted to.”

It was on the set of this video that Madonna met her first husband, actor Sean Penn. ‘Material Girl’ was nominated for best female video at the 1985 MTV Video Music Awards but was beaten by Tina Turner’s What’s Love Got to Do with It’.

In this video directed by Mary Lambert and shot between Venice and New York, Madonna plays a knowing virgin in a wedding gown as she walks through marble rooms, in direct contrast to a sexualised Madonna, frolicking on a gondola. “[Mary] wanted me to be the modern-day, worldly-wise girl that I am. But then we wanted to go back in time and use myself as an actual virgin,” Madonna explained. Madge’s iconic bridal look is now a go-to look for fancy dress parties worldwide.

Madonna’s lead single from the album of the same name, Like A Prayer is arguably the most controversial video of her 30-year career. The video tells the story of a white woman who witnesses a violent crime against another woman, and then watches police arrest the wrong man because of the colour of his skin. She visits a church to seek guidance and a statue of a black saint comes to life and kisses her, arousing Madonna – cue international uproar! We don’t think Madonna cavorting in front of burning crosses helped much either…

Pepsi quickly pulled the plug on  a new Madonna sponsorship and the Pope encouraged people to boycott the singer. Luckily now the furore has just about died down and people can appreciate the video for the masterpiece that it is.

“It’s such a passionate song. I had to present it in a passionate way, and I used mythology to tell the story, with the story of the Minotaur, the matador, fighting for love,” Madonna explained about the video for her comeback track this year. “And the colour red. And flowers. Horns, and death. And naked men. You know, the important things in life. I don’t want to make every video the same. But I did love the richness of that video. To me it felt like a painting that came to life. That’s what I was trying to do.”

Fashion photographers Mert and Marcus directed this video which featured near naked men dancing in stilettos. Madonna recruited Ukrainian dance group Kazaky to appear with her in the video, inspired by the androgynous aesthetic of the group, who danced in high-heels yet come across masculine with their muscular, macho bodies.

Madonna also called upon male mega models Brad Alphonso, Jon Kortajarena, Rob Evans, Sean O’Pry and Simon Nessman to star in the video. Her Madjesty has always had an eye for a male model…

From the 1992 album Erotica, this was the first time that we got to grips with just how raunchy Madonna could be. The album was accompanied by the release of Madonna’s first book, Sex, a coffee table book full of explicit photos. Think Fifty Shades was saucy – as usual, Madonna did it first, and better. As the lyrics say, “There’s a certain amount of pleasure in a little bit of pain.”

This video, directed by Chris Cunningham, sees Madonna as a gothic witch, dressed entirely in black with jet black hair, positioned in a barren desert landscape, and transforming into various black animals. Hauntingly beautiful, the video showed us Madonna as we’d never seen here before.

For the music video, directed by James Foley, Madonna showcases an image overhaul, stripping off the heavy make-upa and jewellery for a gamine look. With cropped hair, dressed in jeans and a black leather jacket, the singer wears a slogan T-shirt with the words “Italians do it better”.

At the time of the release America was divided by the abortion debate and the video which tells the story of a pregnant girl who after much deliberation tells her disappointed father before he accepts the pregnancy and shares a reconciliatory embrace with his daughter, provoked a lot of controversy. However, despite causing offence to conservative audiences, at the 1987 MTV Video Music Awards, ‘Papa Don’t Preach’ won the Best Female Video award.

This video co-starring Sacha Baren Cohen’s infamous character Ali G was directed by Jonas Åkerlund, who also directed the ‘Ray of Light’ video in 1998. The director explained: “When we did the ‘Music’ video, it was a weird time. [Madonna] was pregnant and we didn’t want her to look pregnant – so we had to work around that. We had an idea to do a fun party video with her and her girls, make it a little bling and cowboy hats and all that. We wanted to have some comedy in there and I wanted to do some animation.”

In 1999, Rolling Stone voted ‘Vogue’ as the second best music video of all time, pipped to the pose by Michael Jackson’s Thriller. Originally set to be the B-side of another single from Like A Prayer, Madonna and her producers came up with the song once the album had already been realised, but soon realised that it was too good to waste as just a B-side.

Shot in just two days, Madonna took the vogue dance craze that was incredibly popular in the gay and drag ballroom scene of late 80s New York and mixed it with a tribute to the golden era of Hollywood glamour. MTV initially threatened to not play the video as Madonna exposes her breasts but they soon gave in.

You shouldn’t laugh at other people’s pain but Madge’s epic fall at this year’s Brits is too funny not to include. It also proves why she is the undeniable Queen of Pop – what a trooper and a true professional to continue performing after been yanked down a flight of stairs on her back!