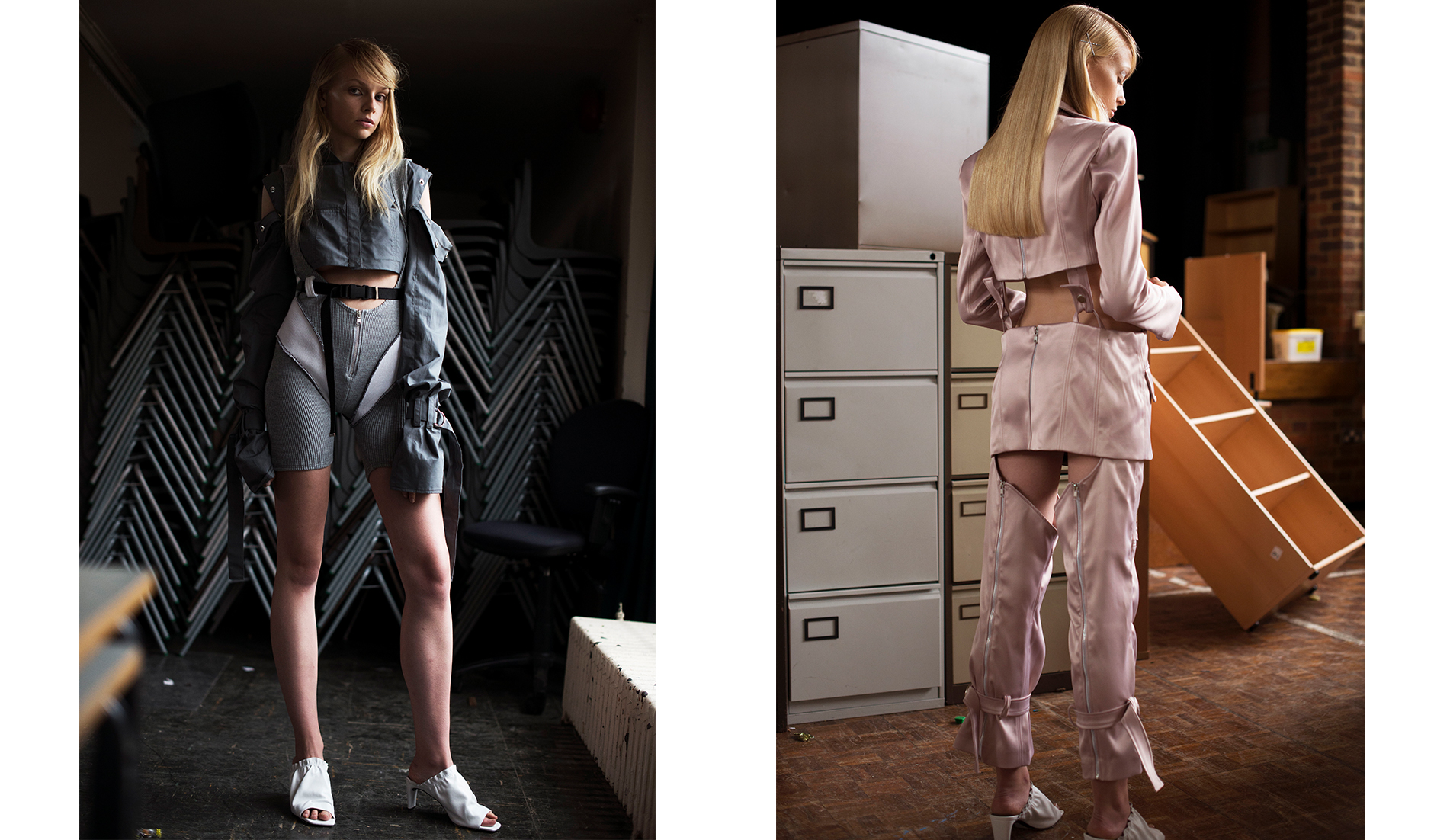 [T]ottenham isn’t exactly known as a fashion capital, but Wesley Harriott is about to change that. The North London designer finds inspiration from the estate he grew up in – where he was exposed to a raw side of life from a young age. Escaping reality via anime and videos, he developed a lifelong passion for Japanese culture and style.

Placing the femme fatale at the centre of his vision, Harriott’s signature aesthetic is street-luxe with a decadent edge – he’s a master of deconstructed outerwear, androgynous shapes and bold cut outs. It’s all about celebrating feminine power and strength and rejecting normative ideas about identity.  The music world loves him – with Lady Gaga and CL wearing his daring pieces on the red carpet.

We caught up with the designer during LFW to talk about breaking down gender barriers and finding inspiration from the youth right now.

Your SS18 collection is inspired by London youth culture – how is this reflected in your designs?

The SS18 collection is inspired by a lot of the youth I work with and their point of view on how they feel positioned in the world. I took a lot of interest in their ‘us vs them’ mentality, a feeling I could  identify with when I was a teenager. These kids I work with have a constant anticipation of going to war against those above them politically. They feel oppressed and forgotten by the system. I feel intercity working class youth view themselves more as child soldiers. They are not afraid to fight, they have no fear of loss because they haven’t much to loose, or at least they feel like they haven’t. I looked a lot at old riot gear, and military uniforms. A lot of the collection deconstructs and reassembles. I was also really inspired by Evangelion! An Anime about teenagers forced pilot War machines for the government. I wanted to rework those visuals and shapes built for combat into pieces representative of the Wesley Harriott women. She is inherently a warrior so the shapes I have introduced sits comfortably with her distinct visual identity. 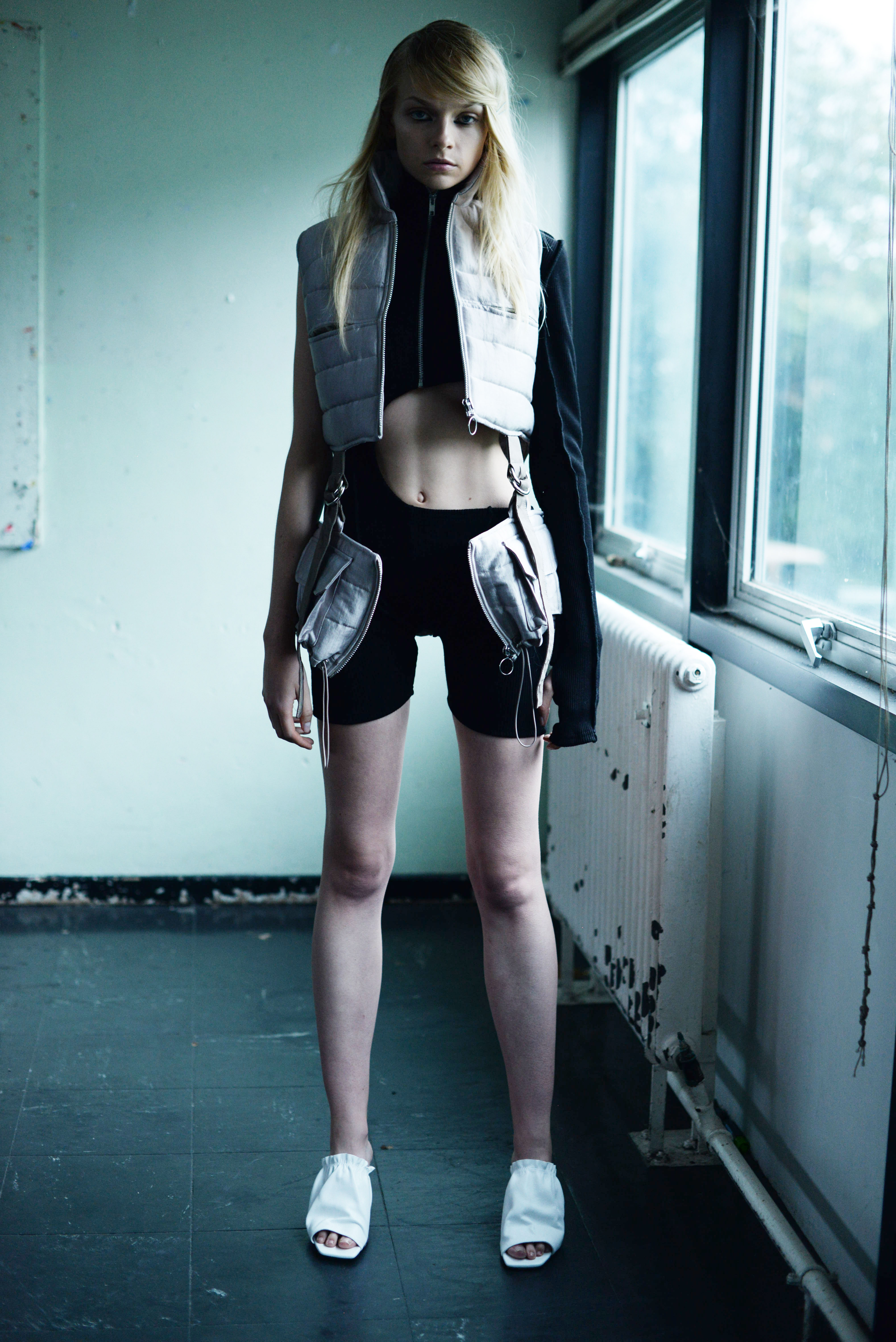 What is it about Japanese culture that particularly fascinates you?

When I was about five years old, my mum’s friend gave me my first Anime cartoon called ‘Cat girl Nuku Nuku’. That film was my first depiction of Japanese culture, and at that age I felt it was all real. I believed there was this metropolis where robots and super heroes walk down the street. It was so magically removed from my reality I wished to be constantly lost in it. I have spent my life wishing I were a Samurai or piloting some mega robot through the sky.

I grew up reading the Japanese street fashion magazines like ‘Fruits and Tune’, which in turn introduced me to designers like Yohji Yammamoto and Rei Kawakubo. Those designers taught me about the power of clothing. How fashion is transformative.

My love for Japanese culture is rooted in their arts. Their reality is so beautifully twisted with fantasy and it taught me that it is okay to dream and imagine.

Celebrating female power and strength is a big theme for you – do you think we see enough of this in fashion?

Strength and power in women’s clothing is present and represented, but will always be over shadowed by sex. The world at large likes to see women in a certain way. We as a society have to be able to label or identify women – she can’t just exist. Designers who champion all that women have to offer are sometimes misunderstood because people can’t label the women they are speaking to!

I get annoyed when some designers will describe collections as ‘strong’ and ‘powerful’, but what they really mean is ‘sexy’. In the context of women’s fashion, strength and power gets confused a lot with sex. Some designers think a woman’s power lies in what she can do sexually, rather than what she can do for herself. I think fashion is still a little 2D in its view on a women’s potential. 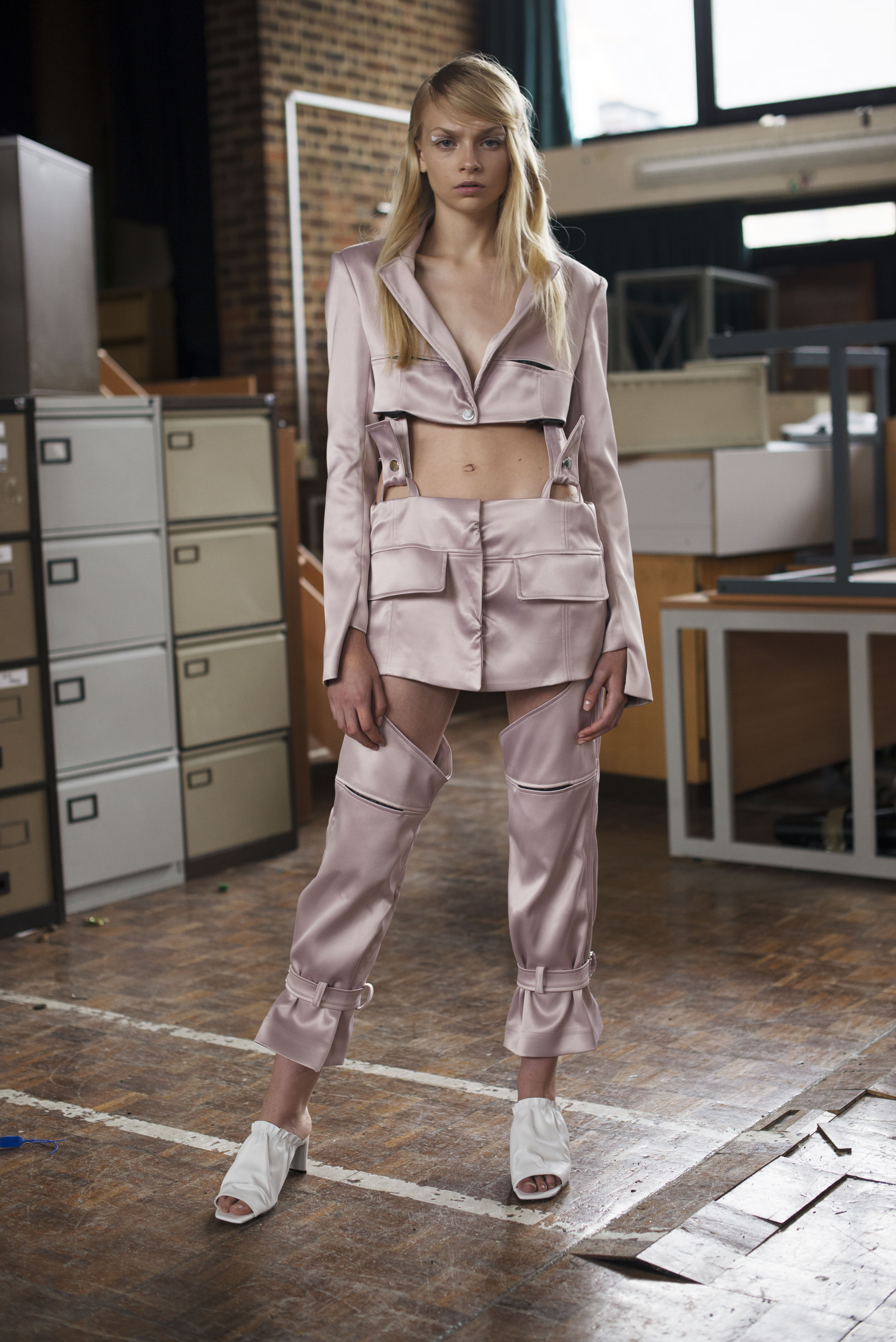 Is it important for you to break down gender barriers in fashion?

When I come to design collections and research I look at images of men just as much as women. Fashion for me is not a question of gender; it’s a question of narrative. What story are we telling, what questions do we want to answer. I am in a position to be able to amplify people’s personas not their gender. A lot of new designers are really messing with the ideals of what gender is and it’s so important. It sets people free and freedom is one thing we all want to feel.

How has growing up in Tottenham shaped your work and vision?

The estate I grew up on was a living soap opera; there were drugs, violence, and all kinds of crime. You know you’re in a unique situation when you’re boiling the kettle to give one of the local prostitutes hot water for her pot noodle. Growing up in Tottenham gave me insight into such raw parts of life. The mentality was about survival and so angry, but in that anger the community found a weird sense of family and solidarity. People were bonded by misfortune, which was awful, but at the same time made people feel some kind of comfort. What stuck with me about growing up in Tottenham was how much I witnessed women being disrespected. You had men beating them, you had the prostitutes being used, you had mums really struggling and as awful as it was to witness, but no matter what happened these women just kept going. I could never see them as weak, I saw them as soldiers because nothing would break them, and they always got back up. I escaped a lot into anime and video games where the women were god-like, so if you pair my reality with my escape, my aesthetic really is a manifestation of how I feel women truly are super heroes. 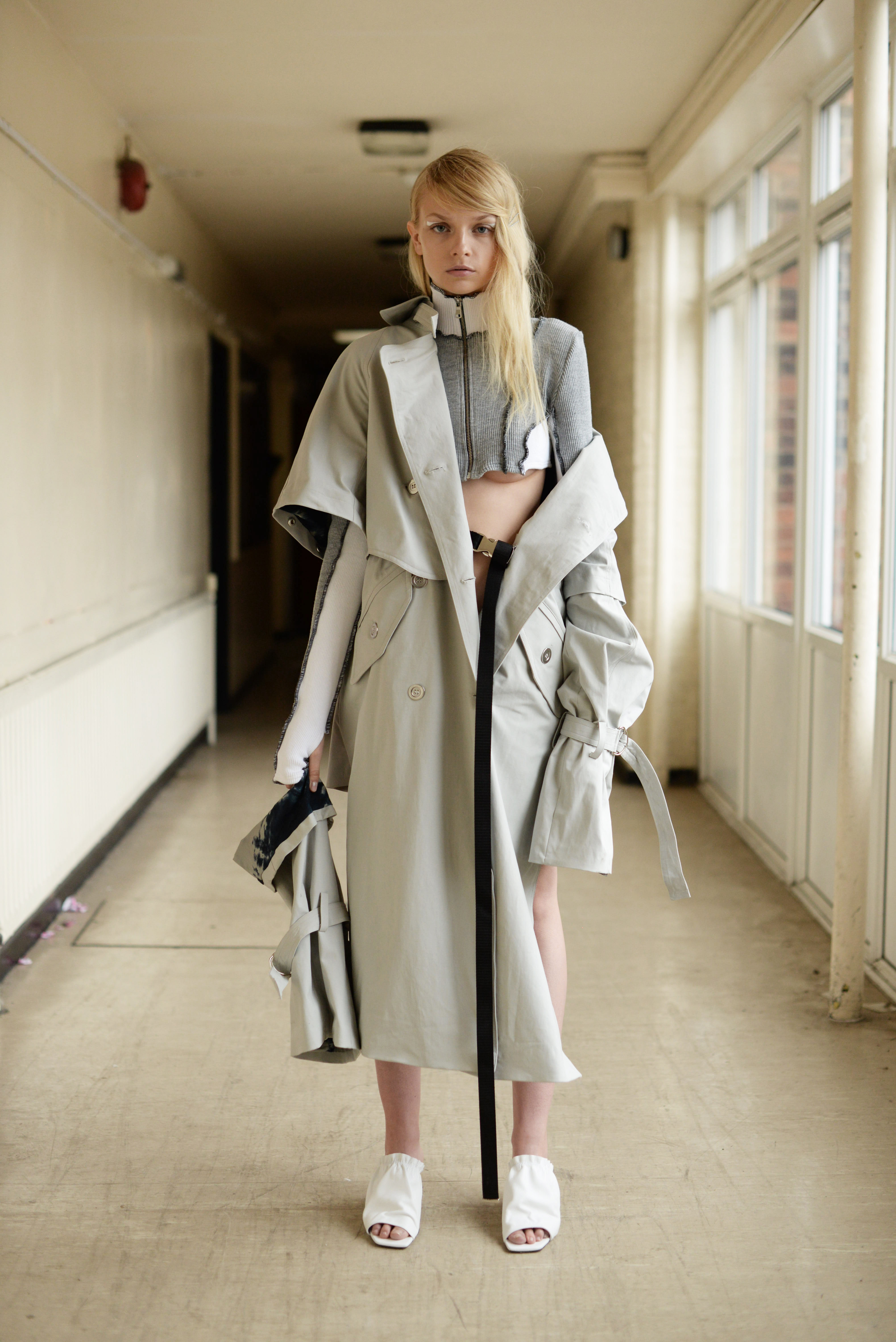 Who would you most love to see wearing your pieces?

I have been SO lucky with the people who have worn my pieces. I have a weird list I have built over the years. CL wore a suit from A/W17 she was on my list, Gaga wore one of my dresses and she was on my list, however Rihanna is a big one for me. Rihanna represents SO much of what I love in women. She is defiant, strong; she absolutely represents herself and nothing else. She is an ultimate for me. I actually would also love to design costumes for women in video games like Chun Li in Street Fighter, or Nina in Tekken! That would be so mega. They are not real women, but they have inspired my view points on real women so that would be a cool full circle moment. 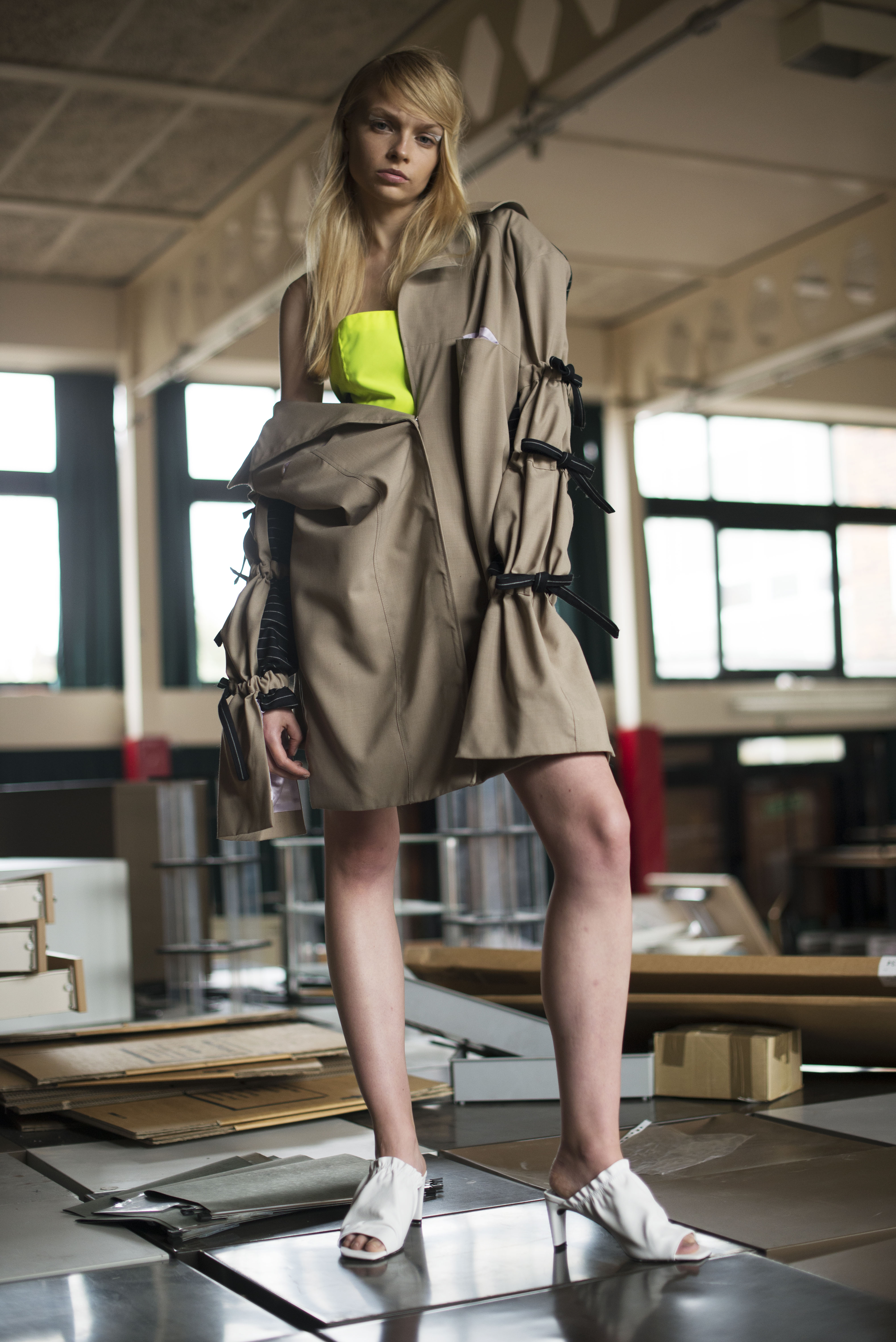 What’s the best thing about being a designer in London right now?

I think London is very down to earth, it’s not afraid to be unpretty, it’s not afraid to experiment. I really love that designers here are given the right to explore and develop where as other fashion capitals I feel you need to have to be fully formed and identifiable. London welcomes evolution within design and that really excites me. In London I feel I can play, rather than meet a certain expectation.