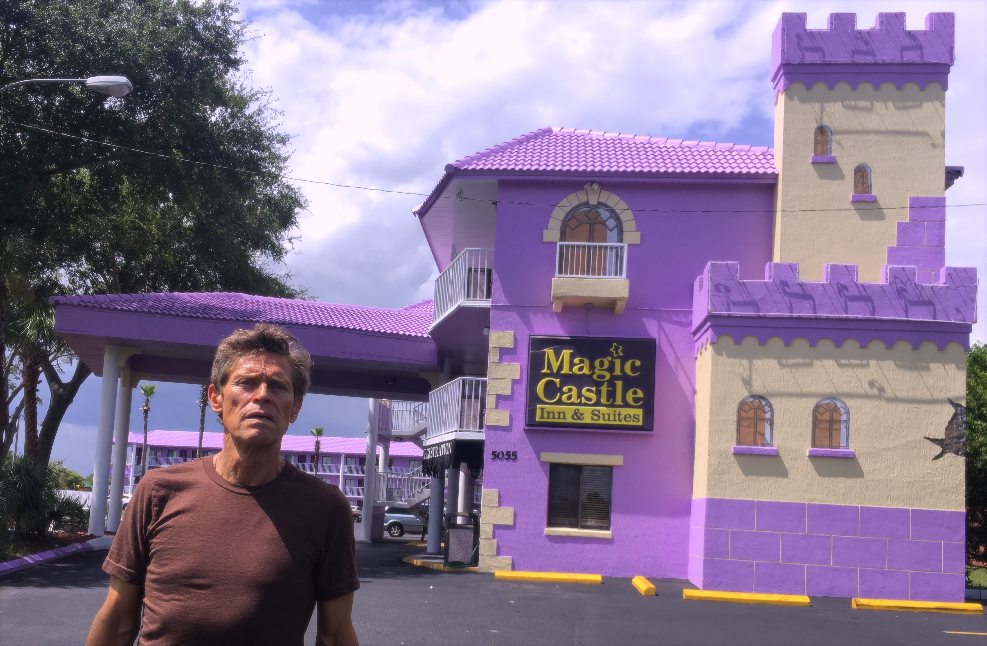 Willem Dafoe needs no introduction. A man with 117 acting credits on IMDB, with over 80 films under his belt, he’s synonymous with franchises and indies alike. From being everybody’s favourite bad guy, the Green Goblin in 2002’s Spider-Man to a Wall Street creep in American Psycho, from Wes Anderson’s The Grand Budapest Hotel to being Jesus himself in The Last Temptation of Christ back in ’88, Dafoe is a cinematic chameleon. In arguably his most charming role yet, he takes on the role of motel manager Bobby in Sean Baker’s 2017 masterpiece The Florida Project.

Taking his career full circle, Dafoe returned to experimental film, a skill he once studied back in Milwaukee almost 40 years ago, for one of the best films of the year. A commentary of the urgent social issues in Florida, the story follows a hidden homeless family of teen mum Halley (Bria Vinaite) and 6-year-old Moonee (Brooklynn Prince) living in the Magic Castle Motel where Dafoe is manager. Shooting on location in Kissimmee, far from the Hollywood studios even if on the outskirts of the Happiest Place on Earth Disneyworld, the actor was dropped among first-timers and real residents alike. Stepping into the world, Dafoe began to live a parallel life, and the authenticity shines through. Having already won Best Supporting Actor from NYFCC and LAFCA, Willem Dafoe is now nominated for a Golden Globe, and you can feel the Oscar buzz rising by the day. We caught up with the actor to find out how he immersed himself into the Floridian suburbs and what it was like to take a step back into a new reality… 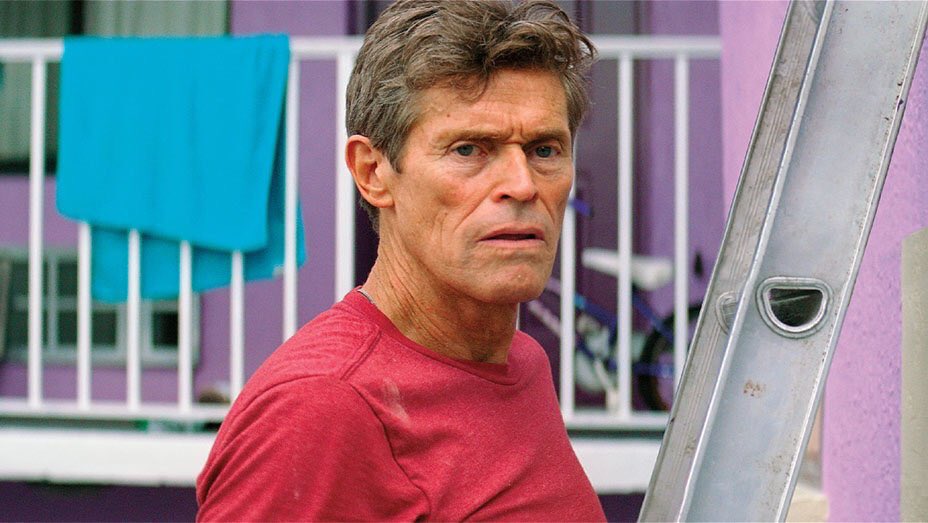 Did your approach differ tackling an indie film compared to your recent big budget work?

I think it’s always different. I had to lay back, I had to see what the world was, and then fit into it. I didn’t want to stick out or be too domineering. I had to learn a certain kind of patience and passivity, to make space for the other people and that was easier to do. For the role that I have, how I function in the story is very particular, I’m somewhat of a connecting piece so I guess I was conscious of that. But it was mostly about fitting in, and serving that community. I had such a concrete job as that character, keep things smooth. Each scene I had to work out how to be with each individual, I had to wear a lot of hats.

I really liked the conflict of your personal feelings towards Halley and Moonee and your sense of professionalism. How did you find having those ambiguous intentions?

I think this guy basically wants peace. I think that you get that with the scenes with his son, that he does know pain, he does know disappointment. He’s a guy who’s lucky to have this job, he’s not that different from these people. So he identifies with them, and when he sees Halley with her kid he’s horrified because he knows what can happen – he’s got out of a bad situation, and hers could be even graver. I think his relationship with Halley is interesting – he sees her in an almost sisterly way, but he also is making sure she doesn’t get one over on him. He’s trying to help her, but he can’t help her too much as then he’d be weak and she could take advantage of him. 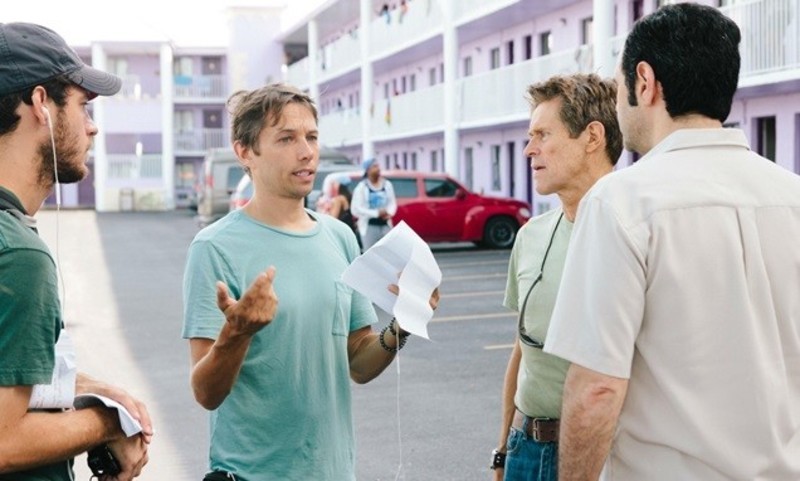 How did you find acting on location in a place where there were real residents?

Beautiful, it roots you. You can’t wind up, you practice naturally talking to the residents, and then you go downstairs and do a scene. You can hold the tone, you can hold the feeling. I am dealing with real people in their real situations, they rooted the movie incredibly. The scene when the power goes out, and Bobby goes out saying “don’t worry”, all those people coming out of the rooms were mostly real people who live there. It doesn’t sound like that would be that significant, but it is. Also when we would explain what we were doing, they would often get it like “I know what this is, I’ve done this!”, and then other times they’d be like “what, really?!”, so they were sort of our bullshit detector. When you have touchstones of facts, it makes you braver. It allows you to say, I don’t know what this is but I’m in contact with it, I’m engaged with the things that are happening. And that’s the place I want to be, you don’t want to be dishing out the things you know, you want to be going towards something that you are drawn to and that’s new. So in that spirit, you can apply yourself to understand the people rather than feel limited.

Did it help working with people like Bria Vinaite, who weren’t professional actors?

When I first saw her I didn’t know where she’d come from, whether she was from the motel or not. I think Bria had an understanding of the woman she plays. Bria was an immigrant from Lithuania, and that was probably not easy for her, and although she doesn’t live like Halley – she is very strong and disciplined in reality – she still is marginalised in the way that she had to negotiate immigration. She moved to New York and had to deal with the language, the city, her family, all while she’s becoming a teenager. She understands what it’s like to be in a spot, which gave her a strong attitude and personality that she could tap into. I liked her immediately though, she was from a different world from me, and I think that the beauty of the film was all of these parallels. The actual doing of it informed the characters: it was like, who’s acting?! I’m going to down to fix that I’m going down to collect rent (laughs) I don’t want to say it was easy, but it was connected. I didn’t feel the stress to create, but I felt so creative because I felt like I was living this alternate, parallel life. And that was beautiful, you abandon yourself and you can adopt a different way of seeing. When you take on a project like that, it’s like falling in love: you’re not thinking about yourself, you do it for that, for them. You have to enter that world, and you’re changed by it. 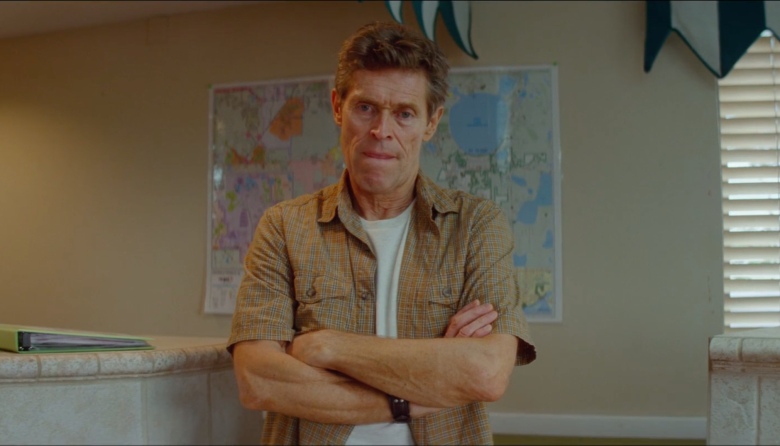 Did doing this film make you want to direct yourself?

No not at all (laughs). I collaborate sometimes, and enjoy that. But I don’t think I could direct. There’s a fundamental difference to me as an actor – I like to do things. I’m a doer not a watcher (laughs). I lose myself in the doing, I like being the thing. It’s nothing that I feel a burning desire to do as I think it’s a different eye. But never say never.

I’m working with Julian Schnabel in France on At Eternity’s Gate, which is a title of a Van Gogh painting. I play Vincent Van Gogh towards the end of his life, it’s not a biopic though. It deals with making stuff, painting, Van Gogh.

‘The Florida Project’ is in cinemas now.