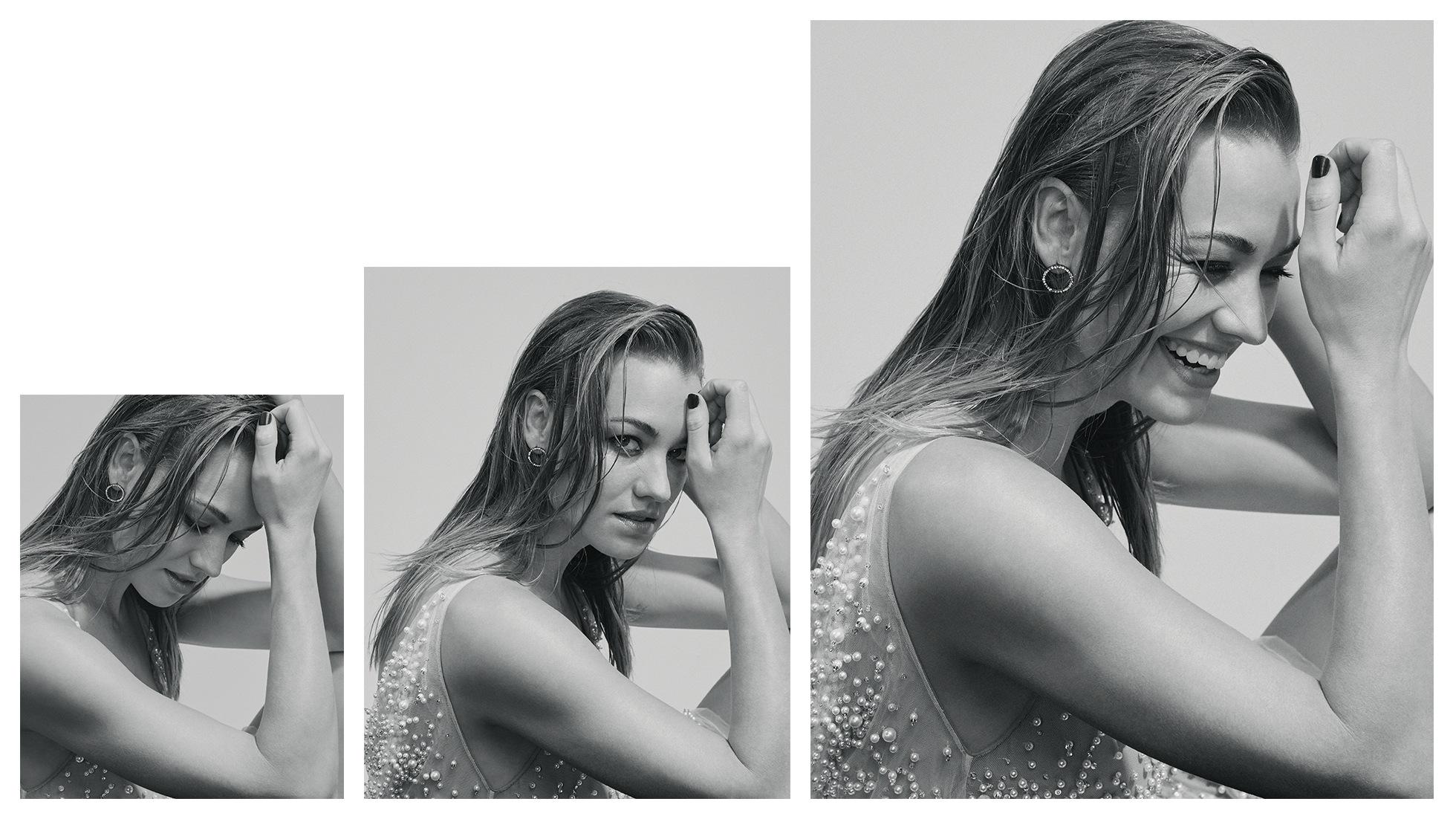 [“]Nolite te bastardes carborundorum…Don’t let the bastards grind you down”. If there’s one lesson to learn from The Handmaid’s Tale, then that’s the one. But actress Yvonne Strahovski is having to play a part of the problem: she’s the bastard, grinding down other women. The character of Serena Joy Waterford is abusive, clinical, humourless, but mostly she’s angry – angry at the world she was complicit in creating. “I have seriously been spoilt with Serena Joy; she’s just so complex,” Yvonne says. Inhumanity is a tough task to act, especially when you’re taking on a character that’s been compared to the First Daughter from hell, but Yvonne sought out her character’s humanity and overcame the challenges of “drifting off into Serena Land” as she nicknames it, and the result is her most powerful performance yet.

Since emigrating from Australia to LA in 2007, Yvonne Strahovski has stepped into the shoes of many a tough Hollywood woman: breaking out as spy Sarah Walker in Chuck, she then became Dexter’s serial killer accomplice Hannah McKay before a turn as Stepford Wife-turned-second-wave feminist Rene Carpenter in The Astronaut Wives. Known to the fanboys of the world as Strahotski, there’s a lot behind those, admittedly mesmerising, Aussie blonde beach waves: picking her roles as carefully as Serena Joy chooses her words, Yvonne is a force to be reckoned with. During our interview it’s evident she’s as fascinated with the relevancy of The Handmaid’s Tale as the rest of us are, openly naming it a cautionary tale, especially to the real life Waterfords in the world. It confronts the people who are said to be “making the world better”, the ones who know that “better never means better for everyone… it always means worse for some”. A novel and TV show that she rightly describes as a symbol of resistance, its potency in our era of fighting for the right in a world of wrong is as harrowing as it is empowering, but Yvonne is ready for the fight.

Season two of The Handmaid’s Tale is on the way; how nerve-wracking was it to be doing a second series without a book to work with?

Even though there is no second book, [writer] Bruce Miller is just so smart and his ability to write these characters is extraordinary. He has such an eye for Margaret Atwood, for storytelling, and is so elevated in the way he transforms it to the screen. I had all the faith in the world that this was going to be just as good, even without a book to base the plot on. The book is so great in its own right but he has a way of seeing that has created something new with it. It’s going really well; we’ve been filming some pretty intense scenes this season, as one would expect from our show!

What do you think of the comparison of Serena Joy Waterford to Ivanka Trump, especially in terms of her notion of domestic feminism? Do you think of it as something of a cautionary tale?

I definitely see it as a cautionary tale. There are too many parallels with our present for it to not be. It’s really incredible to hear how the show resonates with people, and how they themselves draw these parallels. How art is imitating life, and vice versa, because it was so accidentally aligned: the show premiered during the US Election, and when we were filming it was a pre-Trump time; everything unfolded afterwards.

Yeah! It was really strange to play the “bad guy”, and to have those comparisons. It’s not a role I’ve ever played, on paper she is unlikeable and unrelatable, and so I had to strip away those judgments and find the humanity inside of her, her emotional core. It was weird to try and justify her actions while I didn’t agree with them. 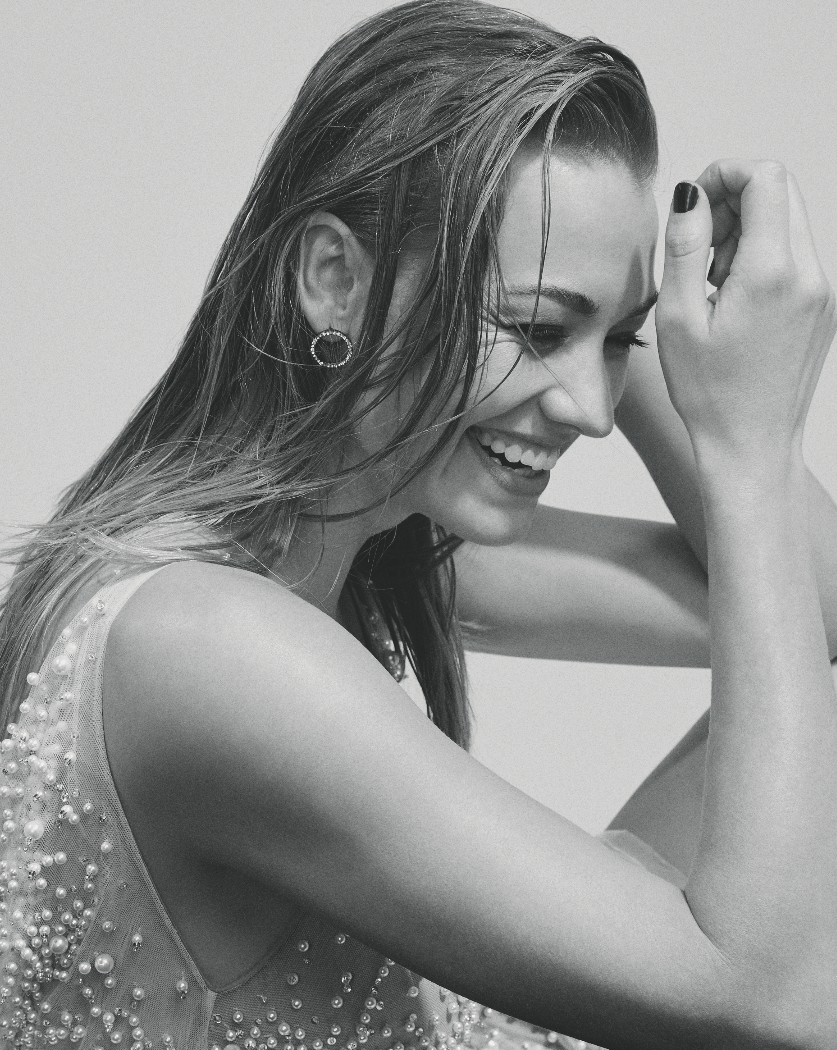 “The awful things women have endured are what brought about this powerful time of expression and acknowledgement, of belief in women and their stories. It’s just a shame that it took such horror for this to happen.”

Do you think that’s partly why they chose to make Serena Joy a younger character? In Margaret Atwood’s novel she is meant to be much older, to walk with a cane….

From my perspective it’s mostly focused on the notion of fertility: how much more heightened this would be with a younger Serena Joy character. With an older Serena Joy the idea of having a baby has already gone, but instead the thought that she could be the one instead of Offred [Elisabeth Moss], and so this creates a different kind of envy. There’s jealousy and competition, and sadness and bitterness; it’s a different kind of power play. It’s a much more potent dynamic when there’s little age difference. I think it becomes Serena’s Achilles’ heel.

How do you feel the show as a whole resonates with our political present?

I think mostly with gender issues in Hollywood and beyond it’s truly at the forefront of news right now and of our show. It was incredible that the award’s season brought the Time’s Up movement, which focused on workplace abuse and created a legal defence fund to help those who have suffered. It’s so interesting that something that was made for television has become a symbol of resistance in a lot of ways, for so many people. This symbol of the Handmaid, the red, it’s become something used in real life protests – it’s been seen at the women’s marches, for example – and it’s really powerful to be a part of that. 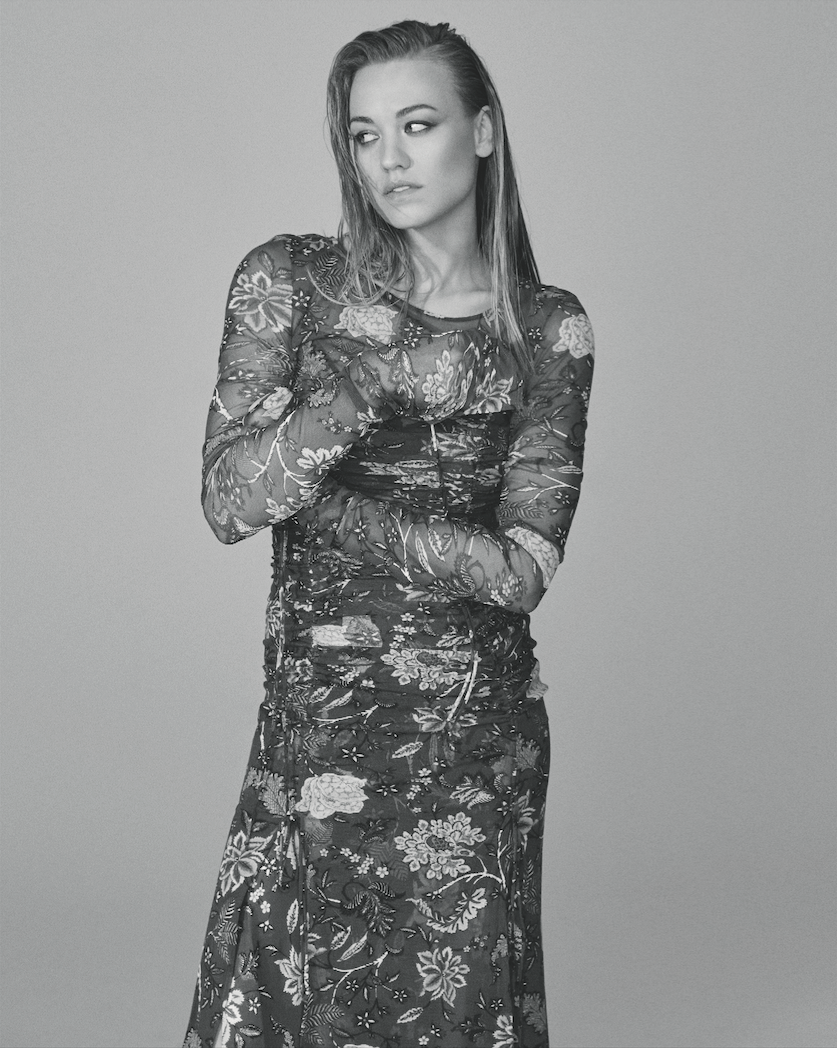 Now we’re progressing through the post-Weinstein world, how does it feel to be an actress at the moment?

I think for me it’s bittersweet, as hopeful and positive the time is, it’s come out of such horror. The awful things women have endured are what brought about this powerful time of expression and acknowledgement, of belief in women and their stories. It’s just a shame that it took such horror for this to happen. The positivity overwhelms all of that though; it’s so important that we are hearing the stories and that men are hearing the stories, and are listening. Although this is just the beginning, it’s such a powerful start; it’s made a huge splash in people’s lives and in society. We just need to keep going and not lose focus, not let it become the talk of the moment: to keep uniting, to keep talking, to keep listening, and to keep supporting all women.

And you’ve acted since the mid-2000s, how does it feel to be a part of the industry change?

I’ve been in the States for 11 years now, but I came into the industry just when Australians were becoming a “thing” in Hollywood. It’s drastically changed because of the focus that we have now on women. It’s finally been acknowledged that we need better roles and we need to tell the stories of women. 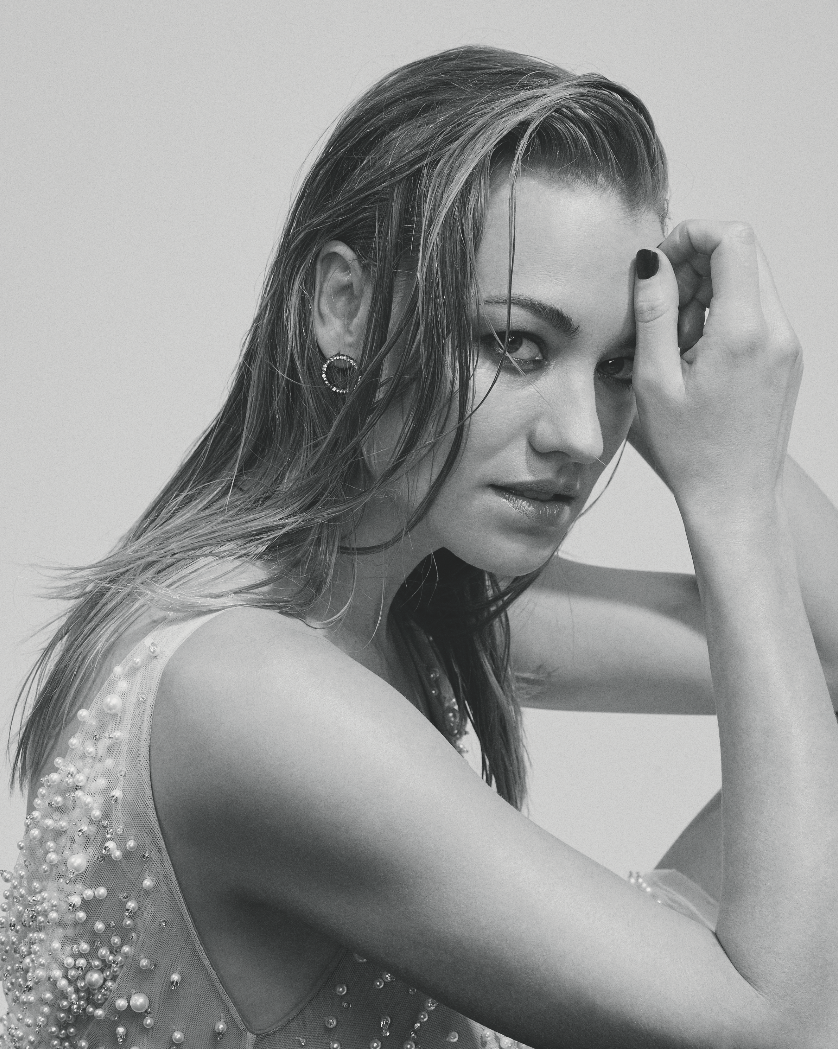 "I really hope that women feel more empowered than ever to take on the patriarchal challenges in life."

What do you think still needs to change?

This is just a starting point; there’s still a long way to go. We need equal pay in all industries. But it’s incredible that there are companies being built out of this awareness; I look up to people like Reese Witherspoon who are creating spaces to create female-driven material. That’s what needs to be happening, to get studios to listen to that: to make worthwhile and applicable stories for women. I think the forming of new platforms is really important for that – Hulu and Netflix are places for new content to thrive I think.

Social media seems to be becoming a place for that too.

Yeah, it does. I don’t know much about all of that world, to be honest. But I think there’s definitely been a serious influence of social media over our time, especially in the entertainment industry.

Do you see it as an industry tool or do you use your platform more personally?

For me it’s more of a tool I think, although I use Instagram just to post dog photos and landscape shots from camping. But I do like to use it to talk about causes that I’m interested in, like the Women’s March, Time’s Up, or the Vote Yes marriage equality campaign in Australia, so then it becomes a place I can throw in my voice. 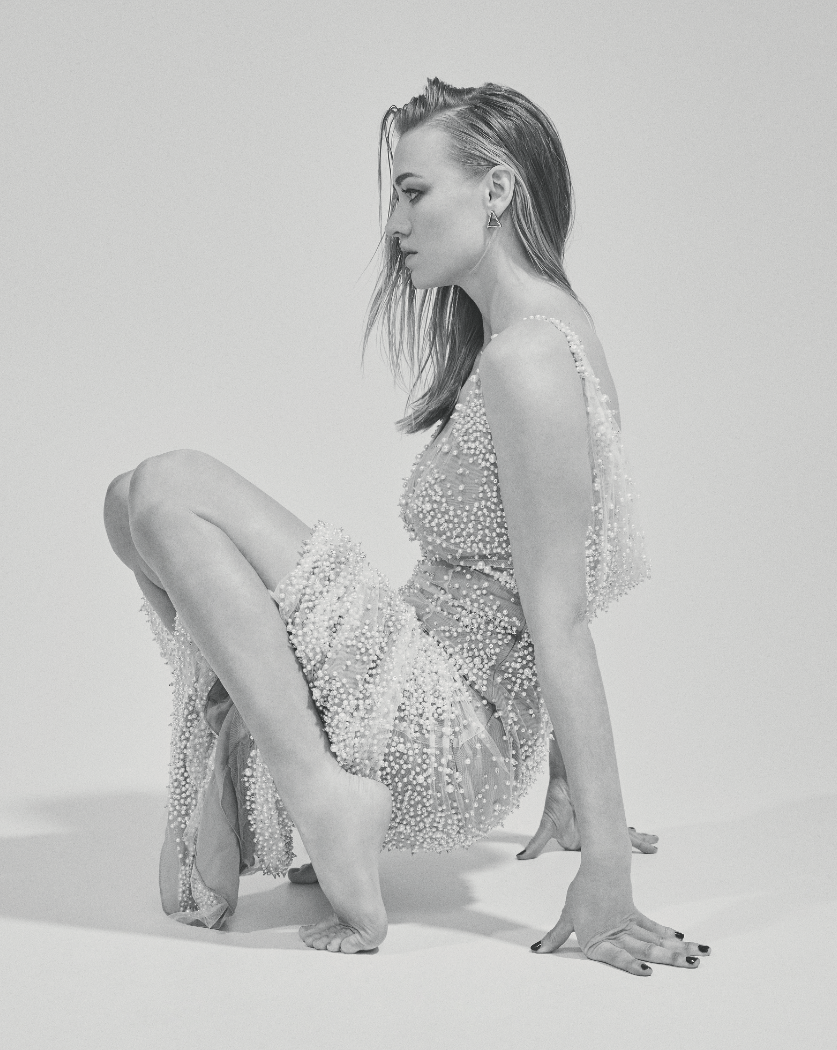 You’ve spoken about being the daughter of Polish immigrants – how has your heritage influenced you?

It’s influenced me massively. I’ve always felt pretty torn between the two cultures. Most of my family were in Poland at a time when we couldn’t go back, so I never got to meet them until I was eight years old. When I did meet them I fell in love with the country and the culture, and now I feel very tied to it as well as to Australia.

Was film a part of your cultural upbringing?

To be honest, I didn’t grow up with much film. Mostly we just travelled a lot, road tripping, I think that’s why I love exploring places and characters. My schooling years into adulthood were all based on theatre, so that definitely holds a special place in my heart. 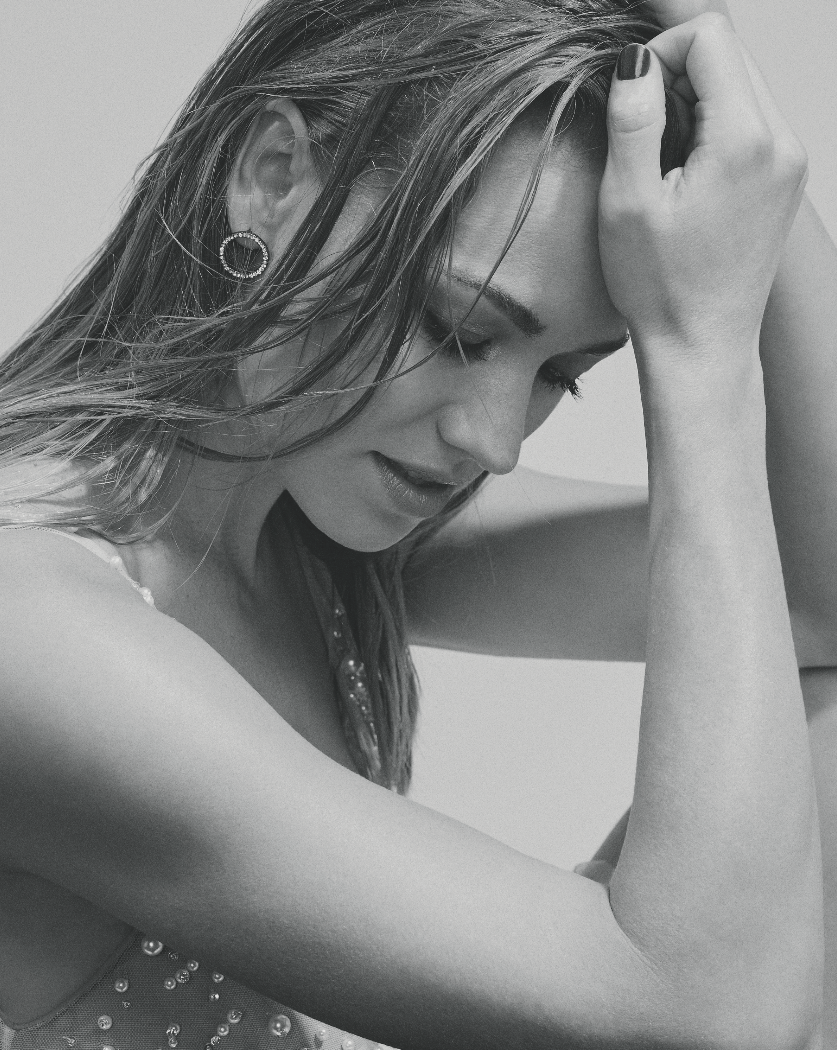 Do you feel like Serena Joy has had an impact on how you will progress in your career?

Oh definitely, it’s great to be on such a groundbreaking show: the directing, the cast, the lighting even. The bar has been set high for my next projects. But Serena as a character has been such an interesting challenge: she’s so complex and there are so many layers to her; those are the kind of characters that I relish and that I want for the future. But I never really know what’s around the corner. I like going with the flow because I’m interested in all genres. As long as the character I’m playing is juicy enough and the storyline is there then I’m in.

What are you hopeful for in the industry this year?

I really hope that we keep moving forward with these female-driven shows. When you look at shows like ours or like Big Little Lies they’ve made such a huge mark on the entertainment industry, and I think it really proves how much we need to keep going with these feminist stories. I really hope that women feel more empowered than ever to take on the patriarchal challenges in life. I want more female directors, more female cinematographers, more female producers, all telling female-driven story lines. Our sense of community and support will really grow as our empowerment grows.

Season two of The Handmaid’s Tale is out now, follow Yvonne Strahovski on Instagram here and click through the gallery below to see Brent Goldsmith’s full shoot.