I’m sat a few feet away from Jay Z who is laughing while he sips on a drink and plays backgammon with a friend at one of the outdoor bars, he’s later joined by daughter Blue Ivy who has spent the morning next door at Atlantis’ Aquaventure – the biggest waterpark in the world. I move to the beach and Jodie Kidd takes the lounger to the right of me while Millie Mackintosh and Hugo Taylor of Made in Chelsea fame are on my left. In the afternoon we head to one of the hotel pools and Marvin and Rochelle Humes walk past looking for Mark Wright and Michelle Keegan, Chloe and Halle Bailey sunbathe a few feet away, while boxer Amir Khan plays with his young daughter in the kid’s pool. This is just the first few hours of the mega-trip that Atlantis the Royal in Dubai has put together for celebs, influencers and private guests to celebrate the launch of the super luxury resort.

Guests are flown from around the globe on business class flights after being chauffeur-driven to the airport and fast-tracked to the lounge, on the other side they’re met with gift bags of luxury chocolates and toiletries to add to the Bvlgari washbags from the flight. Once at the resort, they are welcomed into beautiful sea-facing rooms and suites (the cheapest room is about £800 a night and there’s a minimum two-night stay). The rooms are already filled with the first round of gifting, including bottles of Moët, luxe candles and toiletries and Pichulik woven rope bracelets that double up as the wristbands to enter the endless events of the weekend to come. Social media quickly fills with pictures of stunning ocean views, envy-inducing looks at the hotel’s infinite pools, pristine white beaches and the opulent lobby areas filled with priceless sculptures and water features. And what could be more Dubai than guest bathrooms filled with gilded toothbrushes, razors, combs and even loofahs. 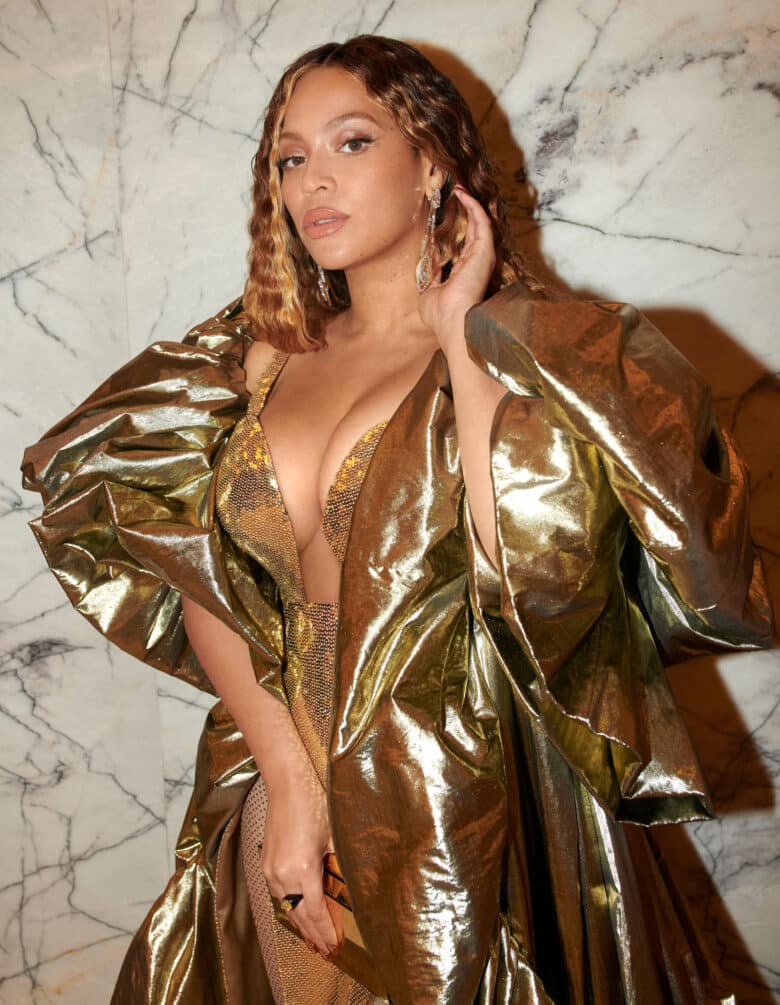 This first day of the trip is all about relaxing and staff reassure guests that ‘everything is included’, which means unlimited booze, and food (laden with truffle, gold leaf and caviar of course) at any of the restaurants across both Atlantis the Royal and sister resort Atlantis the Palm – that’s a fair few Michelin stars – or if you fancy making your own lunch there’s a paella-making masterclass with renowned chef José Andres. Free spa treatments and hair and make-up are available throughout the day in preparation for the evening’s events, which that night kicks off with the launch of Nobu. This is actually at Atlantis The Palm next door. Chef Nobu is there personally to welcome, and guest of honour at the official ‘breaking of sake’ ceremony is Kendall Jenner. All drinks are of course free, and endless plates of canapés including black cod bites circle the floor and terrace. No longer hungry, merry influencers head to the next event of the night, this time back at Atlantis The Royal, where Kendall Jenner is hosting an 818 tequila party at rooftop bar Cloud 22. Centred around two huge pools, and incredible red tree sculptures, guests dance while downing 818 cocktails and pinch themselves that they’re at a party where both Jay Z and Ronan Keating are welcome ­– this might be the most extravagant weekend of all time. Still, it’s not one bit pretentious when it comes to the guest list, it’s been curated perfectly for maximum social media coverage, and as the night draws to a close Instagram is already alight with talk about Atlantis The Royal.

Back at the room that night, the gifting fairies have been again, a red box with a Valentino scarf and an invite to the opening of the on-site store sits next to a huge box of holistic bits and bobs including crystal water bottles, energy sprays and wellness gifts from the spa. 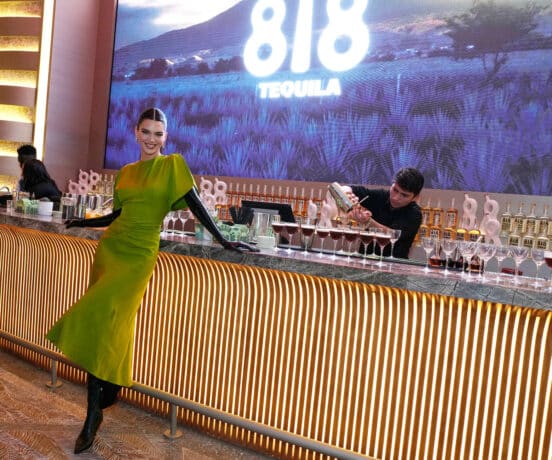 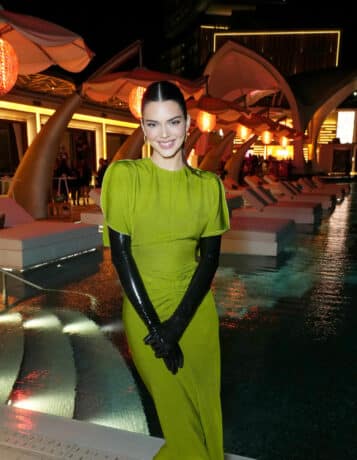 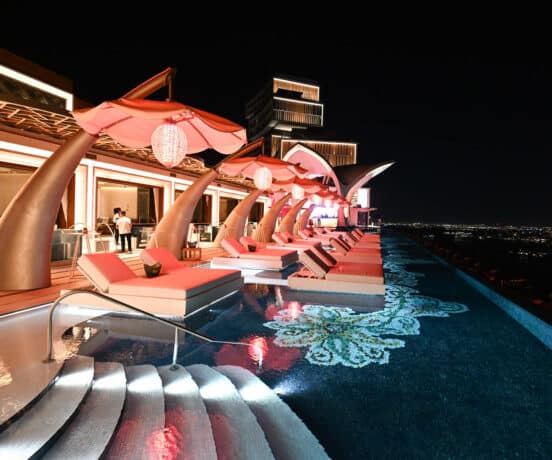 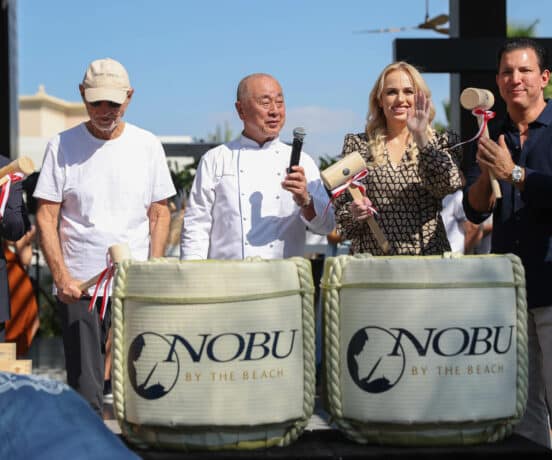 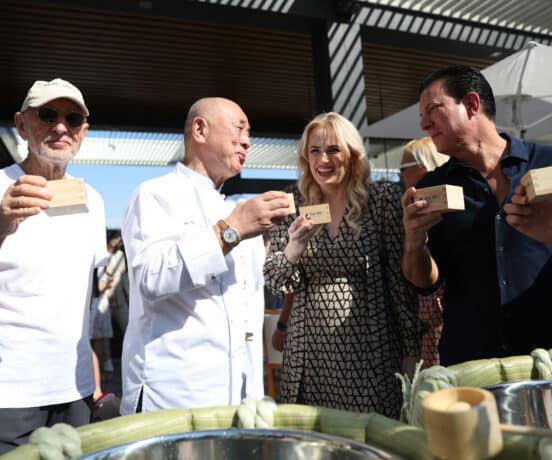 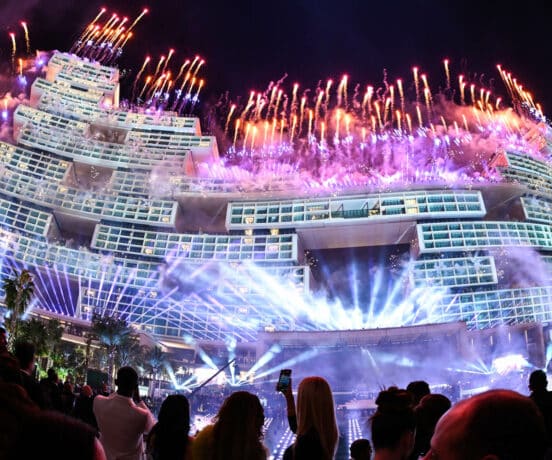 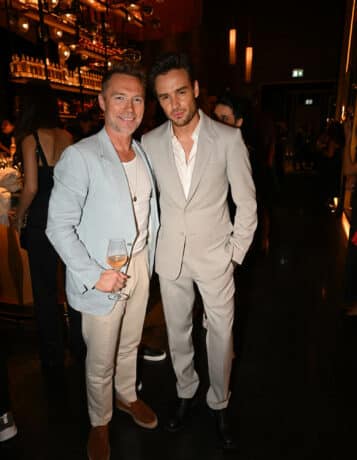 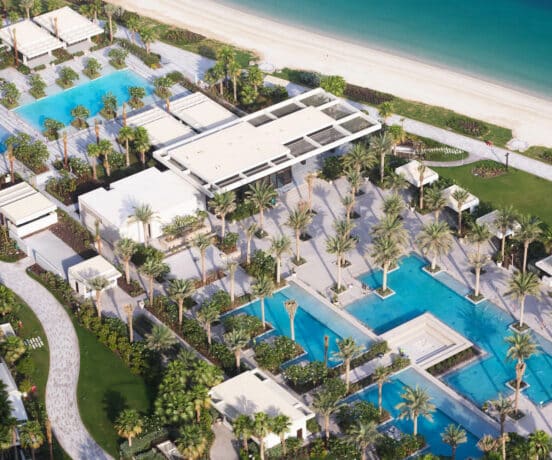 The late night and sore heads are soothed by more free massages and spa sessions the next day, and general lazing around the pools where Moët has set up vending machines of mini bottles and are handing out free tokens to guests, as well as free pouring from magnums. Tired of champers? Head to the Sea Lounge on the beach for more 818 cocktails, a few VIP guests are invited up to Cloud 22 (the scene of the crime from the night before) to enjoy the pools – the place has been transformed with loungers and the alternative skyline of sunshine. As per usual it’s free-flowing drinks and food – our hangovers let us just about manage a tuna niçoise salad and some beef sliders.

After a day of sleeping off hangovers or getting back on it, it’s the evening everyone has been waiting for. The Grand Reveal starts with a two-hour red-carpet event from around 6pm, more celebs have arrived and stars include Letitia Wright, Winston Duke, Edward Enninful Sabrina Elba, Liam Payne, Ashley Park, Bar Refaeli, Charli Howard, Trey Songz and so many more including local dignitaries. After this, guests are divided over the hotel’s restaurants for dinner – we’re lucky enough to land Dinner by Heston Blumenthal and are sat at the table next to Kendall Jenner and her mates, the food is experimental and of course delicious but all anyone can think about is getting a good spot for the Beyoncé gig. We’re chaperoned in set groups to the mammoth stage that has been specially erected on site. We’ve been allocated specific areas depending on importance (I’m guessing), the top guests get front-row seats – this includes event organisers and VVIP guest and an array of stars from Bollywood Wives (Indian language movies are huge in the UAE). We’re taken to a slot side of the stage which is the closest you can get to Beyoncé, and ironically houses most of the journalists and influencers who immediately break the ‘no photography’ rule and are posting videos on Instagram before the gig even begins. The music is accompanied by free-flowing Moët and soft drinks “only champagne will do for Beyonce” the waiter tells us (read the full gig review here). Beyoncé’s breath-taking 70-minute performance is followed by a two-hour set by Swedish House Mafia, after which people either head to other bars on site, or to bed. 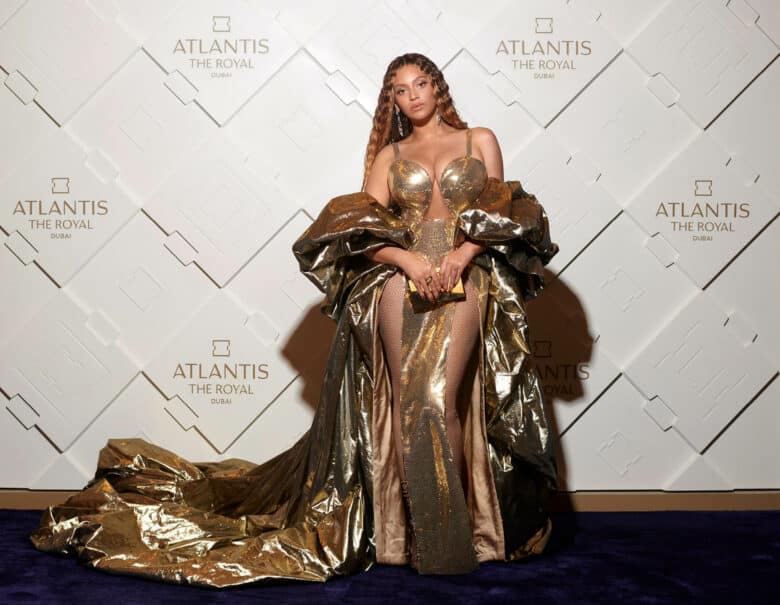 Breakfast on Sunday morning is a solemn affair as most stick to in-room dining to nurse hangovers, but the party is nowhere near over, the last full day at Atlantis The Royal starts with brunch at Nobu by the Beach – the second Nobu opening of the weekend, this time guest of honour is Rebel Wilson who takes part in the traditional sake opening, celebs from the night before gather round to watch or take up the cabanas that border the giant pool – other cabanas are taken up by food stations serving every sort of sushi. The drinks sponsor this time around is Whispering Angel – again waiters with magnums of the rosé wine wander around the pool and restaurant topping up glasses before they’re even close to empty.

The brunch is followed by an IVY PARK party – showcasing a preview of the new unseen collection that launches next month (there’s no sign of Queen Bey but we hear she’s been to the practice runs to keep an eye on everything), models including celeb body positivity activist Ameni Esseibi walk amongst guests in a mixture of camo, bright oranges and deep purple looks. Then it’s time for a quick outfit change for the guests (more free hair and make-up) and it’s up to the 23rd floor for the closing party – the launch of Ling Ling, the resort’s nightclub (the original opening was at Hakkasan in London). And the party’s not over until Fat Joe sings – he appears for a surprise performance late into the night. 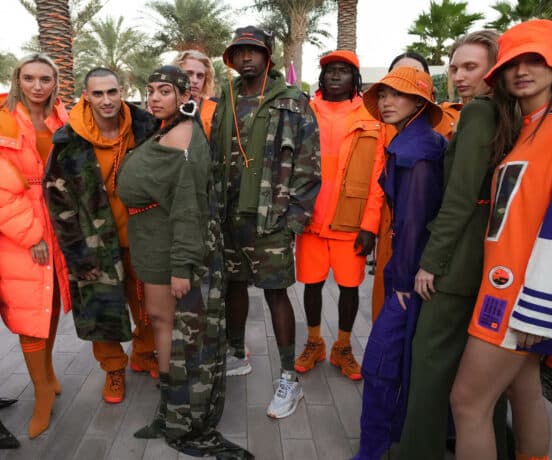 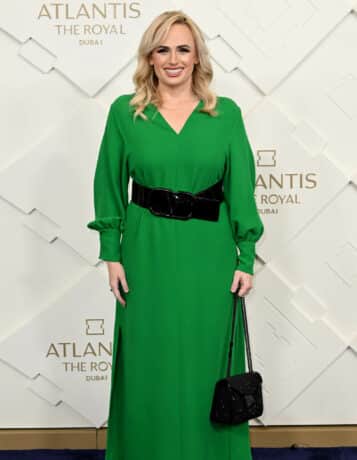 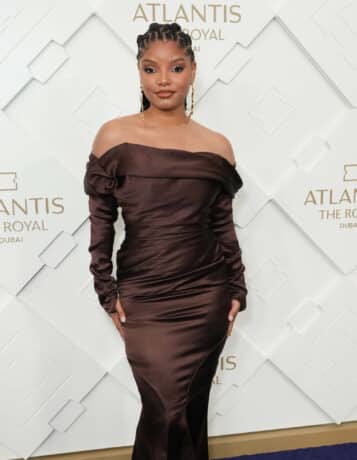 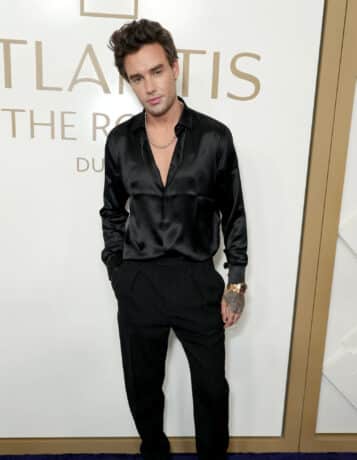 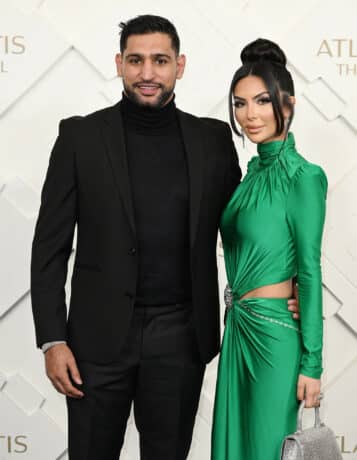 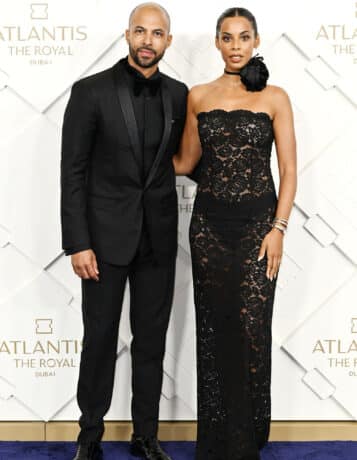 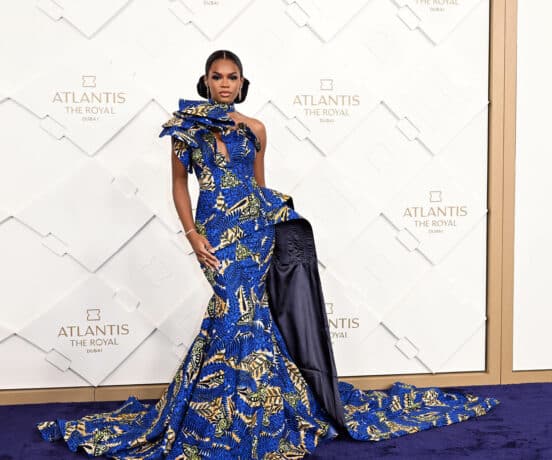 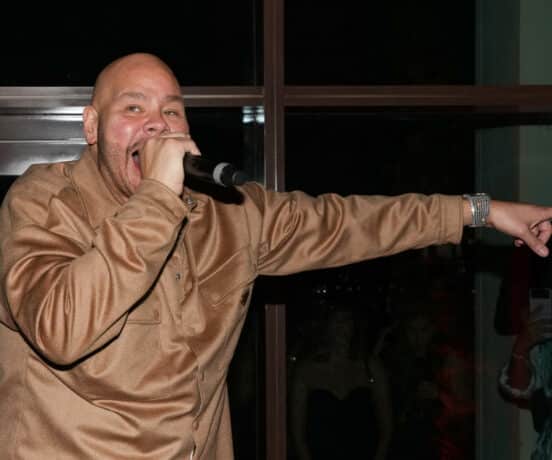 By Monday morning I feel like I’ve been at Glastonbury Festival for five days and sit in the lobby area, a table away from Mark Wright, Michelle Keegan and footballer Robbie Keane, wondering if I’ll ever drink again. Whereas the local influencers checked out on Sunday morning, international guests get an extra night and also given the option of an additional two more nights at Atlantis The Palm…who are we to argue with that? The plan is to quietly recover on a bed and breakfast basis and enjoy the hotel’s White Beach pool area and pop to its Hakkasan restaurant. “We’re glad to inform you that we’ve added a free food and drinks package to your stay,” they tell me as I check-in. And so, the party continues…